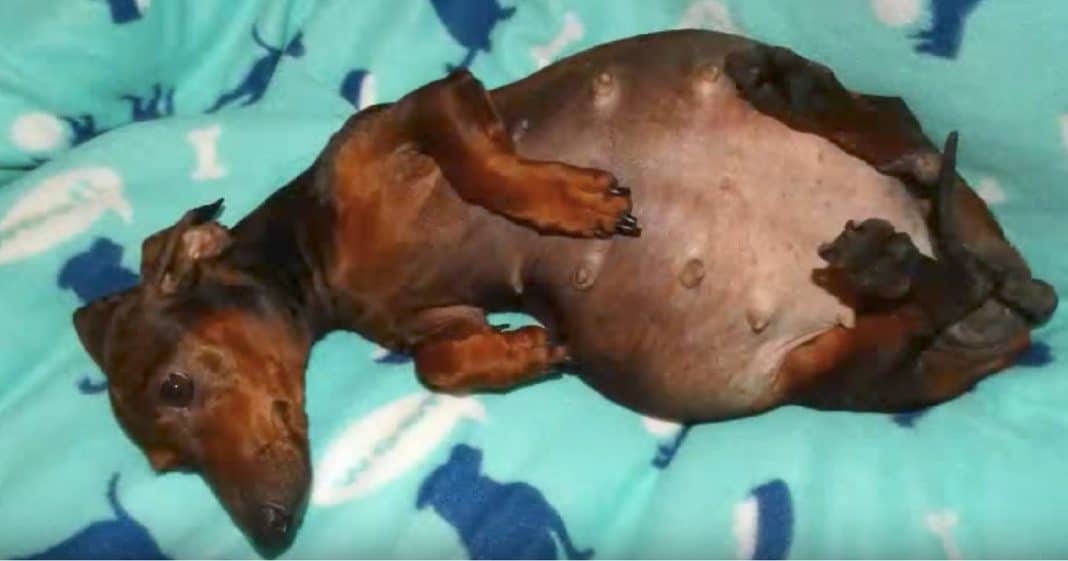 There’s a reason they call dogs man’s best friend. These friendly and incredibly loving creatures would do anything for their humans.

Unfortunately, humans don’t always show these animals that same kindness, and instead submit them to incomprehensible abuse.

That is what happened to this sweet dachshund named Maria.

Because of the way they have been bred, dachshunds often have problems with their backs and hind legs. After suffering neglect, little Maria, who belonged to a breeder, ended up becoming paralyzed from her ribs down.

Despite being paralyzed, though, her owners forced her to breed. As her belly got larger, the tiny dog could barely get around as she was forced to use her front legs to drag herself across the ground.

Then, when the breeders found out they would have to pay $3,000 for Maria to get a C-section, they abandoned her.

Thankfully, Maria was taken in by Friends Of Emma, a rescue organization in Texas that helps homeless and abandoned dogs.

When they took her to the vet the prognosis didn’t look good. Maria was anemic from a severe flea infestation and was fighting off several infections.

While some dogs may have just given up, Maria was determined to fight for her life for the sake of her puppies.

With the help of her rescuers, Maria was able to give birth to seven healthy puppies via C-section. They named the puppies after the Von Trapp children, who inspired the story of The Sound of Music: Friedrich, Gretl, Werner, Liesl, Louisa, Kurt, and Rolfe.

But there is even more good news! Maria’s rescuers were determined to help her with both her emotional and physical wounds. For months they worked with her, and when you see her today you won’t believe your eyes!

While it seemed like all hope was lost, all Maria needed was some love and care. Today she can walk and even run, and she has learned to trust humans again.

While it breaks our hearts to hear stories like Maria’s, we love that there are people like the rescuers at Friends of Emma who won’t give up on these animals and can give them the happy endings they deserve!

Did you love seeing how Maria’s story turned out? So share this!