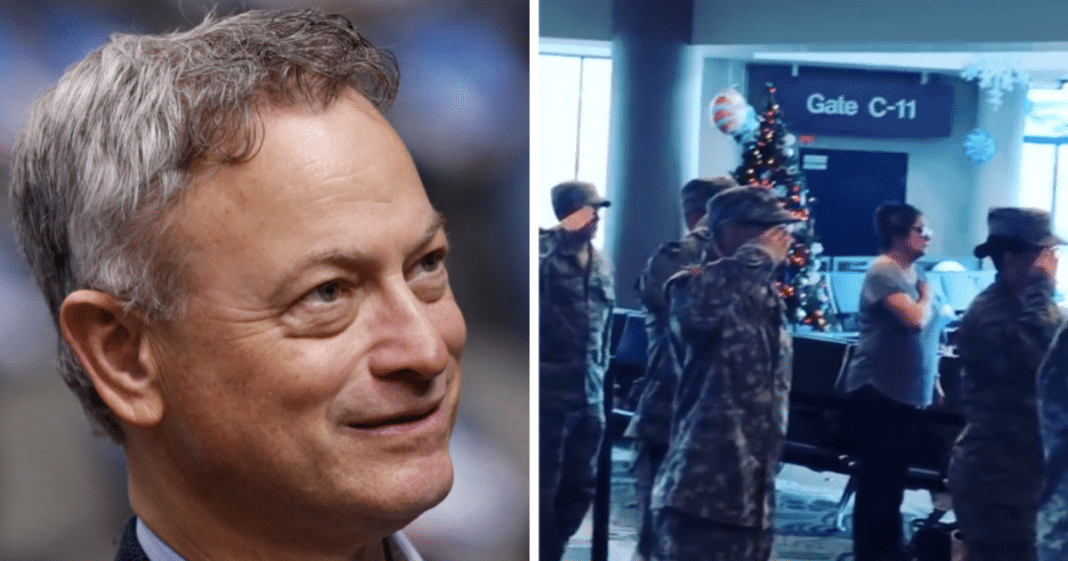 Every year, actor, director, and musician, Gary Sinise organizes a four-day holiday experience for the children of our fallen military heroes, surviving spouses, and Gold Star families. It’s called the “Snowball Express.” After nine years, the Gary Sinise Foundation announced they would move the party to the happiest place on earth.

Sinise hopes to offer unforgettable experiences to Gold Star families who deserve to be honored in a special way.

“Every one of these families deserves a bit of magic in their lives,” says Gary Sinise.

Children of fallen military heroes were given a free December trip to Disney World in Florida. The holidays can be particularly difficult for families who have had to say goodbye to loved ones. The Snowball Express attempts to offer some much-needed relief with exciting experiences.

During the trip, the kids could bond with other kids who suffered the loss of a veteran family member who gave their lives to defend America. It’s a way to honor the memory of fallen heroes and the thousands of military families they leave behind.

“These families will have an opportunity to bond with the only people who can truly understand their loss: one another.”

Over 1000 Gold Star Children travel w/ surviving parent, 1,750 in all, via @americanair to Disney World today as part of our @GarySiniseFound Snowball Express program. This charter left LAX this morning. I’ll join up in a few days. Have fun kids! We love you! pic.twitter.com/OfMEpVF1er

On Saturday, an entire concourse at the Nashville International Airport came to a complete standstill to give over 100 kids flying on the Snowball Express a proper sendoff. Everyone joined together as they sang the national anthem.

A woman at the airport, Jen Tringale, filmed the amazing and heartwarming scene and shared it on Facebook.

“I witnessed an international airport come to a complete stop today,” she noted.

After the singing concluded, the large crowd were left in tears.

“Most every person standing around, myself included was bawling at the sight of these kids and spouses who have paid so great a price for our country.”

“To see all of this at Christmas time was so humbling. Seeing the general public in an airport stand still to honor these kids was simply beautiful.”

I witnessed an international airport come to a complete stop today … At the Nashville airport I walked out into the concourse to this scene @americanairlines was flying a plane full of children who had lost a parent in combat, to Disneyworld on an all expenses paid trip and they threw a party for them at the gate❤️But when they announced them over the loud speaker and they lined up to board the plane the whole airport literally stopped and sang the national anthem with military present in salute. Most every person standing around, myself included was bawling at the sight of these kids and spouses who have paid so great a price for our country. To see all of this at Christmas time was so humbling. Seeing the general public in an airport stand still to honor these kids was simply beauitful. @bna_airport #nashville #fallenwarriors Gary Sinise Foundation #america #snowballexpress #christmas Garysinise

Another group of families got a special sendoff at the Indianapolis Airport. Kids got a standing ovation from people dressed in costumes as they boarded the plane.

What a sendoff for families as they board the Snowball Express! @INDairport -> Chicago -> Orlando for a special holiday trip in honor of their loved ones who died while serving our country. @GarySiniseFound @GarySinise @DoubleGee18 @WTHRcom #WTHRSunrise pic.twitter.com/ZWNAfnckBk

Sinise plans to join up with the kids later and enjoys seeing their smiles.

“It’s something I feel is incredibly important for our nation, letting the children know that we do not forget their sacrifices and we honor them. And it’s such a great feeling to see them healing, smiling, and having fun,” said Sinise.

The good work being done for military families has been noticed by Everybody Loves Raymond” star Patricia Heaton. She shared a now viral Twitter post, calling for the actor to win Time Magazine’s Person Of The Year award.

Hey @TIME , why isn’t @GarySinise ever on the Person of the Year list? Hey @TheAcademy , why isn’t he ever picked for the #jeanhersholt humanitarian award? He raises $30M a year to build homes for wounded vets along with his #goldstarfamily support. Retweet! https://t.co/pj7BGEN7Ds

For more, see the video from KSDK News below: