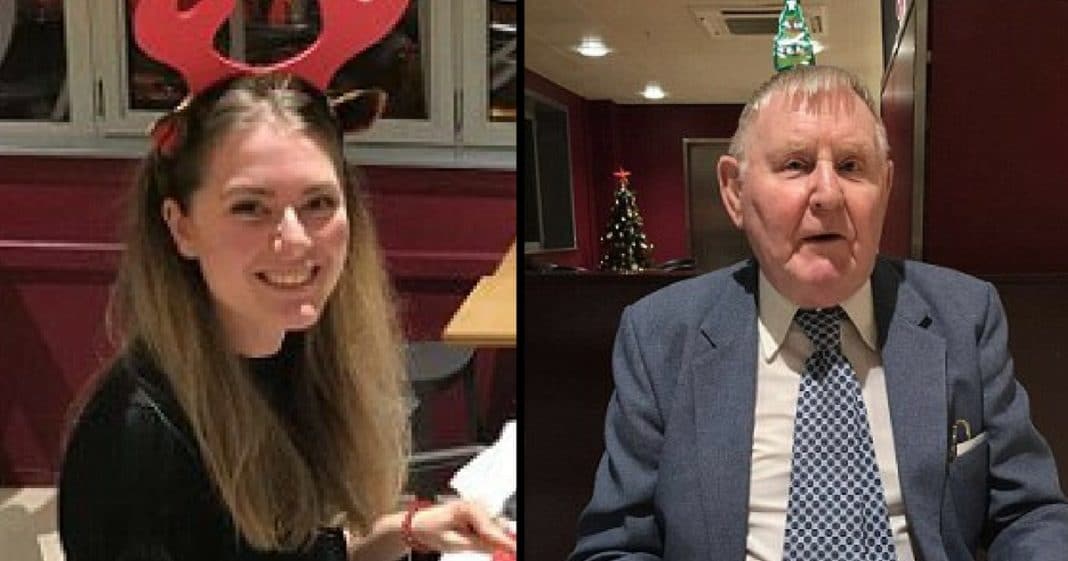 It’s easy to look at all the craziness that is going on in our world and get mired down in the darkness, but it’s stories and people like these that remind us that bright sunshine is still out there.

Ellie Walker is a 22-year-old from Leeds who works at her local Sainsbury’s grocery store. She loves talking to customers as they come through her line, but her favorite customer is 86-year-old Edwin Holmes.

“He is without a shadow of a doubt my favourite customer,” she said. “He is the cutest man and so chatty.”

Edwin’s wife passed away after 45 years of marriage and his daughter and two grandchildren live in Australia, so he spends most of his time alone.

In December he mentioned to Ellie that he would be spending Christmas by himself and eating a frozen ready meal. The sweet cashier knew she couldn’t let him do that, so she devised a plan – she asked him out on a date!

“I thought if it was my granddad and he was alone I would want someone to talk to him,” she said.

Ever the gentleman, Edwin showed up to their date at the store’s restaurant in a suit and with flowers for Ellie.

“As for the suit, it was my first date for about 55 years,” he explained, “and [I got] the flowers because I wasn’t going to go empty handed.”

The unlikely couple had a wonderful time together talking over dinner. Afterward, Ellie posted about her experience online.

“Last night I had the privilege of going on a Christmas dinner date with a very special gentleman,” she wrote. “Edwin is one of our most loyal customers and although he doesn’t spend thousands of pounds he is valued within store by both staff and other customers.

“He has no immediate family and he mentioned a few weeks ago that he would be spending Christmas alone with a frozen ready meal. The thought of him being on his own at such a special time breaks my heart and if I could take him home with me I would (pls Mum?).

“So last night on behalf of Sainsburys I took Edwin for Christmas dinner in the store cafe. He came in all dressed up and presented me with flowers. Such a lovely night with a lovely man. I’m so grateful to have met you Edwin thank you for making my life brighter.”

As for Edwin, he said the dinner made him very happy.

“It was unexpected and I had very pleasant company,” he said.

The two now regularly meet up for coffee to have a chat and spend some time together. We’re sure those sweet visits mean the world to Edwin, and are special for Ellie too.

If only people were more like Ellie and went out of their way to make others feel special and loved, the world would be a better place.

Were you touched by what Ellie did for Edwin? So share this!