Elderly Man Scared To Get On Escalator. What This Man Does Next Leaves Everyone In Tears 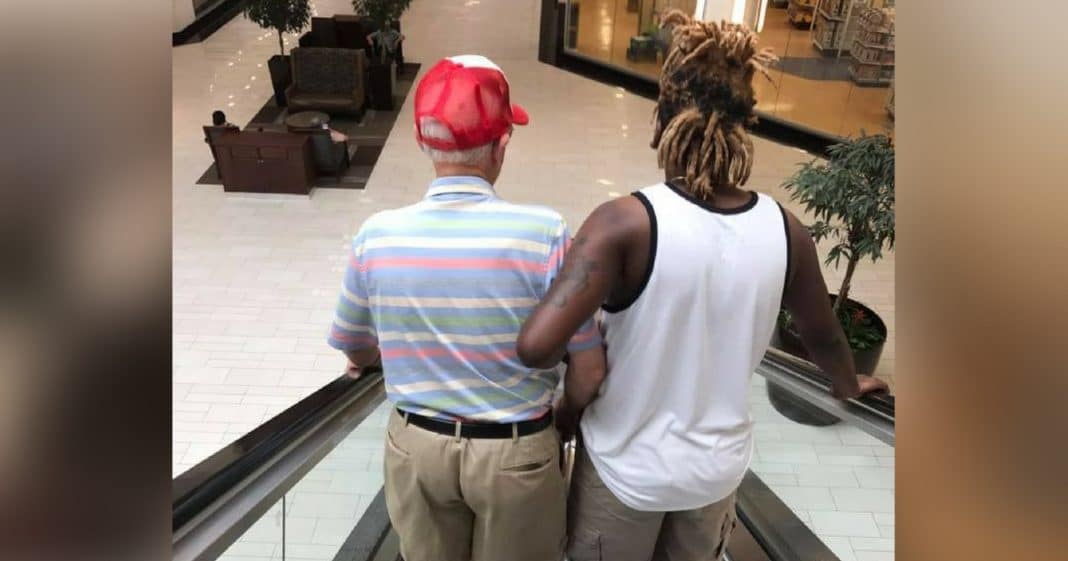 While getting onto an escalator may seem like second nature to most of us, for some people it can be very scary. For those who are unsteady on their feet, like this grandmother in Ft. Wayne, the thought of stepping onto an escalator and tripping or getting hurt is enough to paralyze them with fear.

That is exactly what happened to this elderly gentleman when he was trying to get on the escalator at the mall. Several people started to gather behind the man as he stood there, obviously nervous and unsure about getting on the moving staircase, but he was frozen in place.

All of a sudden, a young man came through the crowd, reached out his arm, and asked, “Can I help you on, sir?”

Paula Accorsi Picard, who happened to witness the special moment, said the young man quietly began to tell the older gentleman about a time he got stuck on the escalator when he was young and how scary that was for him.

“The young man gently offered an assurance, they looked at each other eye to eye for just a moment and the older man accepted his arm,” Paula said.

Even more amazing: “Everyone else remained patient. So, so sweet to witness!”

With all the craziness going on in the world these days, it’s always nice to see stories like this one of people showing kindness and compassion instead of anger and hate. As Paula wrote in a Facebook post when she shared this picture, this young man’s kind act was “A little redemption for the suffering human soul.”

“In about an hour, the evening news will air and we’ll be reminded of division, political mud-slinging, shootings and other heartaches,” she wrote. “But today, violence, age, politics and other social lines were blurred and one person simply helped another.”

“I wanted to hug both of them,” she added. “Whoever this young man is, YOUR FAMILY RAISED YOU RIGHT! THANK YOU! So, please look for the silver linings – as I was so fortunate to witness this evening.”

Many others were touched by the kind act Paula was fortunate enough to witness and shared their own musings on the scene.

Commenter Lori Anne Christiansen noted that, while the two men at first seemed like they couldn’t be more different from one another, “I couldn’t help but notice that they’re dressed the same from the waist down. We’re not as different from each other as we might think!”

Another commenter, Brandi Guillet, was quick to point out that all the violence and hate we see around us goes against everything humans are supposed to be and noted that this young man had been raised right.

“What a nice young man that was raised with love in his heart,” she wrote. “Hate is a learned behavior…. we aren’t born to hate. We need to see more of this!!! People helping people!!!!”

These are the stories we wish we would see more often! It’s nice to know that in a world that seems full of darkness, there are still people shining their lights and doing good in the world! You just have to look for them!

Were you touched by what this young man did for this elderly gentleman? So share this!