Dying Horse About To Be Put Down After Collapsing In Stall, But Stablemate Doesn’t Let That Happen 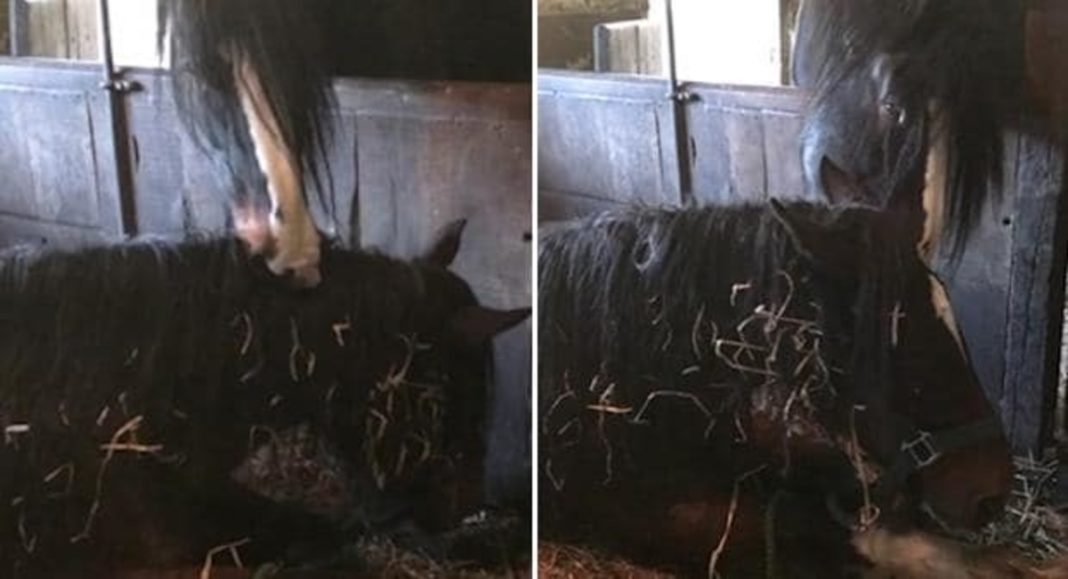 Dogs are known for saving the lives of their owners and other animals or the offspring of different beasts. It’s their sense of smell which gives dogs this uncanny ability to sniff out carbon monoxide or to alert their owners to smoke, fire or gas. These life-saving feats are most common with dogs; but Have you ever heard of a horse saving the life of another horse from death? I haven’t.

Equine colic is always treated as an emergency because the animal experiences “abdominal pain.” If a horse remains off its feet for an extended period, they could experience fatal organ failure.

Beatrice’s owners, husband and wife Donald MacIntyre and Jane Lipington along with four farmhands tried getting the old gal back on her feet. They used a tractor and created a pulley system with massive straps, but the 1-ton lady wouldn’t budge.

Sadly, the couple knew they’d need to establish a deadline for permanently ending Beatrice’s pain by contacting their veterinarian and having them humanely euthanize her. She was enduring such hardship; it would be unkind to keep her alive if she wouldn’t recover.

With just 20 minutes left, Lipington recalled Beatrice’s best pal, Beau, needed to be released into the yard for some exercise.

11-year-old Beau and Beatrice have been best mates for four years. It’s not difficult to imagine Beau not understanding what was happening with his good friend.

When he was taken from his stall, Beau didn’t head out to the yard for his walk. He went to his best friend.

Beau stuck his head over Beatrice’s stall door and started nipping at her neck. He pulled and tugged at her head and neck to get her to move.

A horse managed to revive its stablemate after her owners tried unsuccessfully to get the animal to its feet in a six-hour operation.Read more: http://tgr.ph/JdrqqI

Lipington said, “We all watched with amazement. He lifted her so that her chest and legs came up off the ground, with a little encouragement from us she got shakily to her feet, and we quickly walked her out into the yard trying to stop her from falling.”

Thanks to her best buddy, Beatrice made a full recovery. She has an entire life ahead of her with Beau at her side. Love knows no boundaries. Sometimes it takes another animal to show love instead of human intervention.