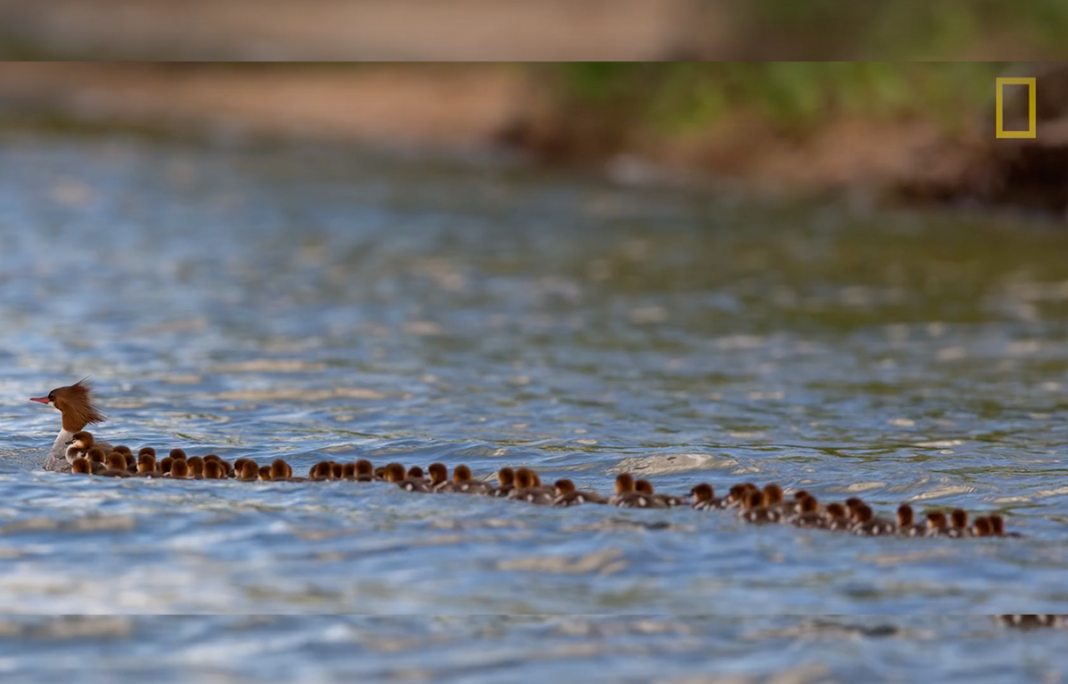 Minnesota Wildlife photographer, Brent Cizek, captured a photograph that has captured attention around the world. In late June, he photographed a “Mama Merganser” with a jaw-dropping 50 baby ducklings following her at Lake Bemidji, a small lake west of the Great Lakes. Then, he spotted her again with an even bigger flock of up to 76 babies!

It all started when Cizek captured this photograph, shared by the Audobon Society, Explore Minnesota, and many others.

Wildlife photographer @brentcizekphoto captured this incredible photo of a Common Merganser mother with an adopted brood of 50+ chicks! This is not an uncommon sight for this species. https://t.co/5Y8KrbFWZH pic.twitter.com/2KAZSiTr6Q

Then the flock grew:

MAMA MERGANSER! I was able to track down the now famous Lake Bemidji Common Merganser that has an adopted brood of over 76 babies! I love the story that these photos tell.

Cizek had a hard time trying to get the photograph because the ducks wouldn’t all fit in the frame!

“I probably shot 50 pictures, and I was just praying that one was going to turn out sharp because the waves were so strong it was nearly impossible to even keep them in the frame,” Cizek says.

Out of all the shots, only one turned out.

Now this family of ducks are famous. This Mama Merganser has been called a “superhero mom” who should be awarded Mother of the Year for her devotion to the supersized brood.

Can't get enough of Mama Merganser? Be sure to watch @jimmyfallon Friday night! I've heard she makes an appearance. ? pic.twitter.com/CYeldODGuG

Cizek continues to follow the bird’s progress with videos and more photographs on Twitter. Amazingly, they flock is still together, following the super-hero mother hen.

Spent another morning with the mergansers. They are growing so fast. They continue to venture further out on their own, but as soon as Mama Merganser starts heading somewhere, they all quickly follow suite. Count is still at 70+. pic.twitter.com/MkIRc0wUnZ

I LOVE THESE BIRDS. pic.twitter.com/mCKJeiYMUh

As amazing as this is to see, Kenn Kaufman with Audubon says big brood counts are actually pretty common. However, 76 is certainly on the very high end.

The ducks tend to lay eggs in the nest of other ducks. Scientists believe it may offer a survival strategy otherwise known as the common axiom:

“Don’t put all of your eggs in one basket.”

Ducks can only incubate 20 eggs at a time successfully, so this Merganser is accompanied by many chicks that came from other ducks. They probably were separated from their parents somehow and started following along with the other ducklings.

“The merganser in this picture probably picked up several dozen ducklings that got separated from their mothers. Adult ducks can’t tell which birds are theirs, and lost young birds that have already imprinted on their own mothers will instinctively start following another Common Merganser because she looks like mom.”

Now Cizek and others in the Lake Bemidji are posting updates and sightings on the ducklings. Any day now, the little guys will be old enough to fend for themselves and will take off on their own.

I would like to thank everyone for all of the positive feedback Mama Merganser has received. If you love seeing these photos, please consider donating to the @audubonsociety to help their mission!

Give birds a fighting chance in a changing world: https://t.co/sHYll16NZy pic.twitter.com/v0awSMfhzr

See more from National Geographic below: