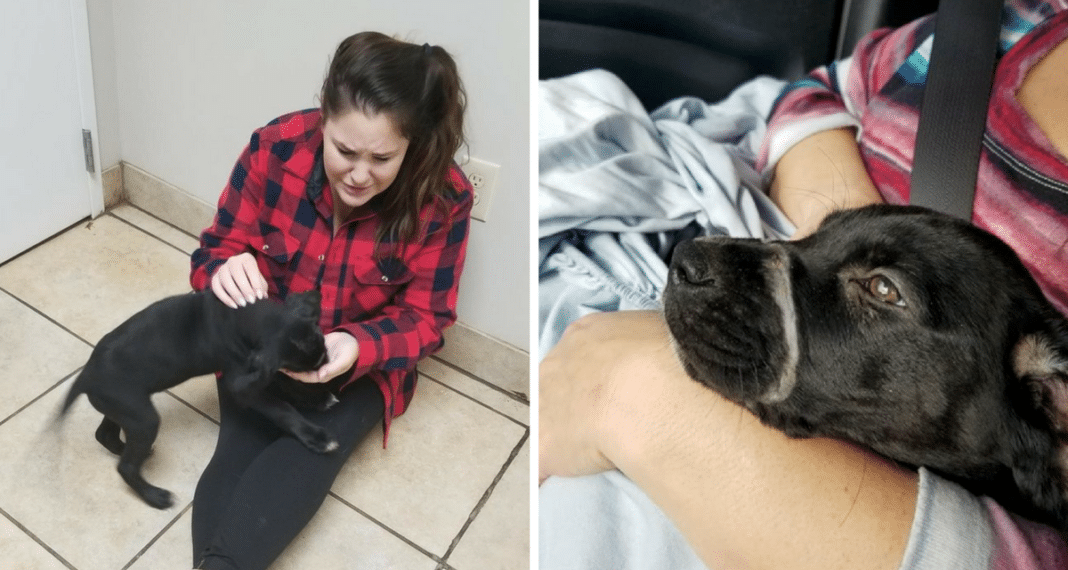 While driving down a road in Travelers Rest, South Carolina, Liz Heatherly observed something heartbreaking at the side of the dirt road. As Liz, her mom and sister passed, they realized what they saw was what looked to be a 10-week-old hound lab mix. The black dog was hobbling down the curvy road. Covered in fleas and ticks, the poor pup appeared to have a cable tie around its mouth.

The trio parked in the first driveway and headed by foot to rescue the scared dog. There was just one problem: The pooch was frightened by all the passing cars. He was hard to catch.

“Once we walked back to the spot where we had seen him, he ran from us into a drainage ditch that was about 6 feet down,” Liz told The Dodo. “We had to slide on our bottoms to get down, and my sister pulled us back up with a spare leash we had in the car.”

After getting the dog on solid ground, they removed the nylon tie from around his muzzle. They uncovered open sores and severe scabbing where the plastic rubbed his skin raw. They then rushed him to the Cleveland Park Animal Hospital.

Dr. Bryant Phillips examined the dog the family named Norman. He determined Norman was suffering from dehydration, severe malnourishment, and intestinal parasites. The zip tie thankfully didn’t cause any permanent oral damage. The vet thought he had the zip tie around his mouth for two to three days. As Norman’s scabs healed, a white hairless line appeared around his mouth. The doctor warned this could happen because the damage to the hair follicles could be permanent.

Despite this small bald spot, Liz fell in love with Norman. She worried though how her 4-year-old adopted dog Jackson might react to a new sibling. Jackson had come from an abusive situation. He enjoyed his status as an only dog in the household. “I honestly thought I would never be able to get a second dog while Jackson was still living because he HATES other dogs,” she added.

Liz had nothing to worry about. When she brought Norman home, Jackson warmed up to him instantly. Liz posted this on social media.

“I’ll never forget this, but when I walked in the backyard and Norman whined in my arms, Jackson jumped up to lick him and let him know it was going to be OK,” Liz said. “Jackson loves  Norman, and it makes my heart so full looking at them playing together.”

With the help and love of his human and animal friends, Norman has flourished and is once more a happy, trusting boy. “He’s so resilient. He took a horrible situation, and he didn’t let it get him down,” she noted. “I  honestly thought Norman would have trust issues or be afraid to let people touch around his mouth,  but he has none of those issues. He is a leaping bundle of black fur that I wouldn’t trade for  anything!”

“Norman is extremely friendly and full of energy. He should have been named ‘Firecracker,’ because that is how he acts,” Liz added. “His legs are so long, and he trips over them all the time.  He’s goofy and loves to play 24/7.”

Norman’s rescue was about two weeks ago. And though the vet said the hairs around his muzzle might not grow back, Liz has seen tiny hairs sprout. “The vet wasn’t sure  [Norman’s fur] would ever grow back, but we are keeping our fingers crossed that it does,”  she said.

“Norman is our little miracle,” Heatherly said, “and I wouldn’t change him for the world.”