Driver Stuck In Traffic Jam When Phone Rings, Then She Learns It’s Stranger In Car Few Rows Back 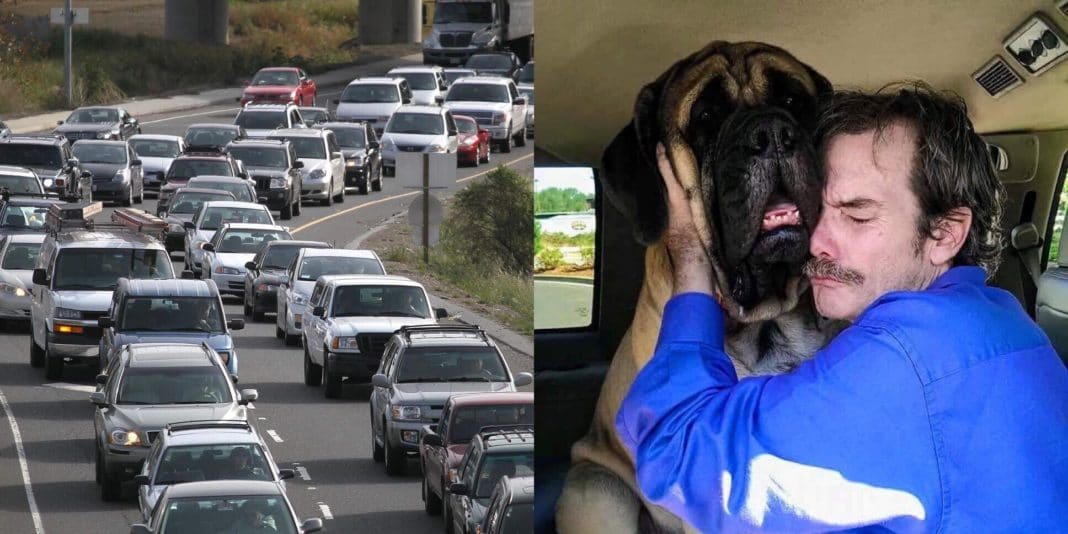 There are fewer things more frustrating than being stuck in traffic. You’re going nowhere fast. With tasks to complete and places to go, the last place you want to be is sitting idle on the road. But for one woman and her dog, this particular traffic jam would turn out to be worth their time in gold. They’d help a total stranger during a fragile time in his life find his stability and love for living again.

“We were stuck in a huge traffic jam for about 15 minutes, without moving, when my phone rang. Since we obviously weren’t going anywhere, I answered. On the other end of the phone was a soft-spoken man who introduced himself as, Andy.

“He explained he was a few cars back from us, and saw Sherman stick his big ol’ head out the  window, so he called the number on our decal (we have a huge decal on three sides of the suburban  with a picture of Sherman’s head, his name, and our contact number). He told us he had just returned home after a 3+ month stay in a nursing home facility. He was recovering from the most recent of multiple back surgeries.

“It’s because of this stay in the nursing home and his failing health that he had to rehome his large breed dog. He is, sadly, unable to care for him any longer. This decision apparently broke his heart, as we could hear him choking up as he spoke. He asked if we could meet up sometime, so he could just pet Sherman. Of course, we told him we would love to set a time to meet up with him. He thanked us, and we said our goodbyes, with a promise to set something up in the next few days.

“As we sat there in traffic, I couldn’t get Andy’s sad voice out of my head. We decided to call him back and ask if he would like to turn off into the Wal-Mart parking lot to say, ‘Hello’ to Sherman real quick. We could hear his voice cracking over the phone when he said, ‘Yes!’.

“When we met him in the parking lot, he slowly got out of his vehicle, using a cane. After proper introductions, we opened the side door of the suburban and told him he was welcome to sit inside the door, to visit with Sherman.

“As soon as he sat down, Sherman came right over and started nuzzling into him. The tears started almost immediately… Andy sobbed into Sherman’s neck. Sherman just sat there, letting him hug him, hold him, and kiss him. It wasn’t long before we were all pretty teary-eyed, as he told Sherman all about his dog he had to let go.

Sherman’s owners are so generous and kind for letting Andy love on their dog. They felt for Andy even before they met him. They heard in his voice his heartache and pain he’d been suffering with for months. I hope being with Sherman helped heal Andy’s shattered heart.

What an awesome dog that Sherman! He went immediately to Andy; he must have sensed his sadness and despair. There’s nothing like cuddling with an animal who seems to understand, who won’t judge your tears and sobs; and who will just accept your kisses while they give you a few of their own.

"We were stuck in a huge traffic jam for about 15 minutes, without moving, when my phone rang. Since we obviously weren'…