Dollywood Employee Finds Burned Bible Page. What It Says Brings Him To His Knees… 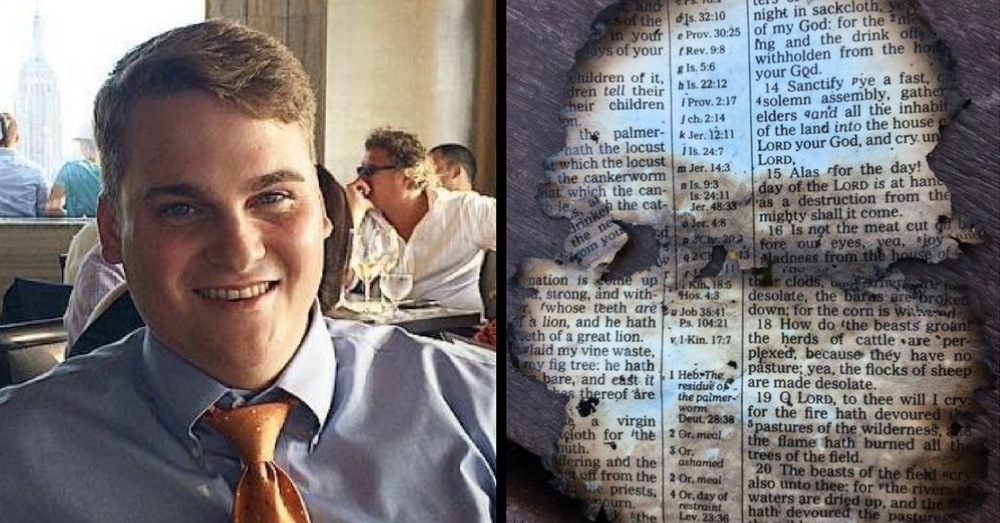 After wildfires tore through Gatlinburg, Tennessee, destroying over 150 buildings, displacing thousands, and taking the lives of at least three people, Dollywood employee Issac McCord headed to the theme park to help clean up.

He had skimmed one area but had not done a very thorough job of it and his co-worker, Misty Carver, teased him, asking, “Is this how you clean your room?”

Wanting to prove Misty wrong, Issac began to scour the area, “really getting in the nooks and crannies.”

That’s when he noticed a burnt piece of paper lying in a puddle under a bench. He picked it up to see what it was, and when he read it he couldn’t believe his eyes.

“As soon as I got down on the ground, I noticed it was a Bible verse, and I was like holy crap,” he said. “It was in a puddle of water. I said, ‘I want to take care of this the best way I can,’ so I gently scooped it up and carried it out the best I could.”

Isaac called Misty over and the two of them sat down to look at the burnt page. Many parts were illegible, but what they could read left them both in tears.

“O Lord, to thee will I cry: For the fire hath devoured the pastures of the wilderness, and the flame hath burned all the trees of the field,” the page read.

“At first, we didn’t know what part of the book it was from,” Isaac said, “but we saw bits and pieces about fire and scorching the land, and how the beast groaned and roared for help.”

They later determined that the verses are from the first chapter of the book of Joel.

“We were like, this is unreal, this is unbelievable,” Issac said. “When we had both fully read it, we looked at each other — and I will never forget this moment — we both burst into tears. I was ghost white, and we just prayed. There was nothing else to do. Still to this moment, almost four hours after the fact, I don’t have words for it.”

Isaac was not particularly religious up to this point – he attends church occasionally and said he has a relationship with God that shapes his morals – but he said these verses affected him so deeply because he has several co-workers and friends who have lost everything in the blaze. Seeing the verses in this context has made him reevaluate the role religion plays in his life.

Issac shared a photo of the burnt Bible page on Facebook where it has since been shared over 70,000 times.

He said he wasn’t looking for fame or social recognition, but wanted to share his find with others because it had impacted him so greatly.

Were you touched by Issac’s inspiring find? So share this!