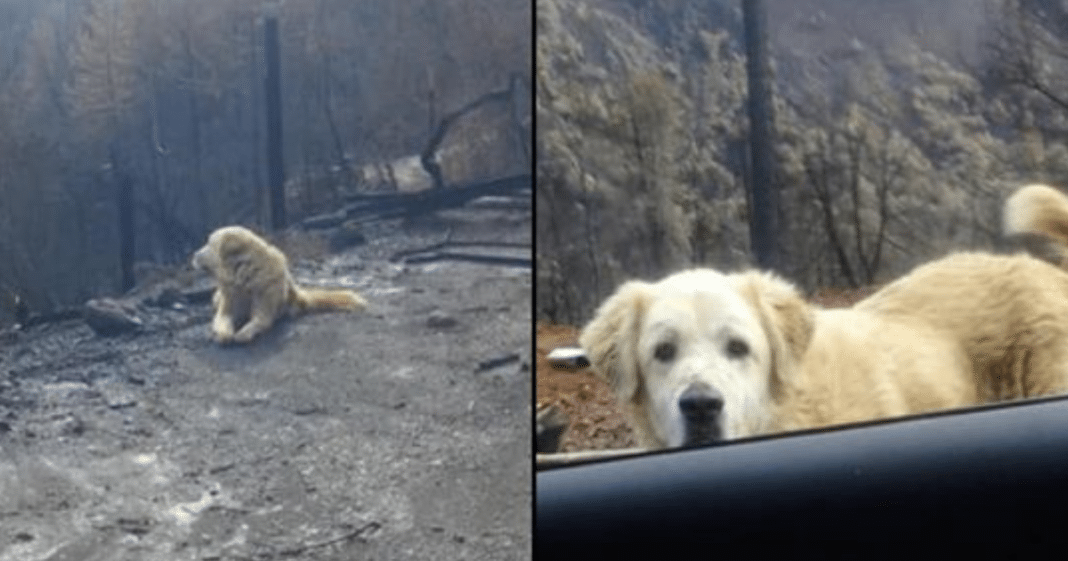 Reports coming out of California about the deadly Camp Fire have included many stories about animals who have defied the odds and been rescued by heroic people who put their own lives on the line for these special creatures. But a few stories are coming out about animals who themselves are the heroes. One of them is the story of Madison, an Anatolian shepherd dog.

Madison’s 75-year-old owner Andrea Gaylord had just minutes to flee her home when the flames from the Camp Fire began to near her property. She was unable to locate her two dogs, Madison and his brother Miguel, both of which roam freely because they are livestock-guarding dogs who don’t do well when kenneled.

When Andrea was allowed to finally return to her land weeks after her evacuation, she was stunned to find that one of her dogs, Madison, was still there, guarding the empty property where her home used to stand. Watch this video, which has gone viral.

Animal rescuer Shayla Sullivan got a request to search for both Madison and Miguel. Another rescue worker found Miguel, but Madison still could not be found. Sullivan decided to put out food and water every day just in case Madison was around. The food and water kept disappearing, so she knew some sort of animal was definitely visiting the site. Then this happened.

“The third day I went in there, I didn’t know if my mind was playing tricks on me, but I felt like I saw a flash of white movement down in the canyon,” she said.

She was right. But Madison didn’t come to her. He waited until his owner came home. Sullivan said that when Andrea showed up, Madison “smelled her.” He ran up with his tail wagging. When Miguel and Madison reunited, it was equally moving because Miguel had been “upset and so depressed” without his brother.

“It was surreal to see them go back into, like, ‘We’re a team now, everything is OK, we got our people, we can go back to work,’” she said.

This was posted on the K9 Paw Print Rescue Facebook page.

Madison’s parents were unable to get home to him when the Camp Fire spread. They hoped and prayed he would be OK. When they finally got clearance to go back to the lot where their house once stood….Madison was waiting there for them as if he were protecting his former home. Never give up!!

Photos Courtesy of Andrea Gaylord. Shayla Sullivan ❤️❤️❤️ Thank you for your dedication to the Camp Fire pets. Shayla is the rescuer who fed and watered Madison after the fire and storm that followed. See Shayla’s comment below for more details about Madison’s story. 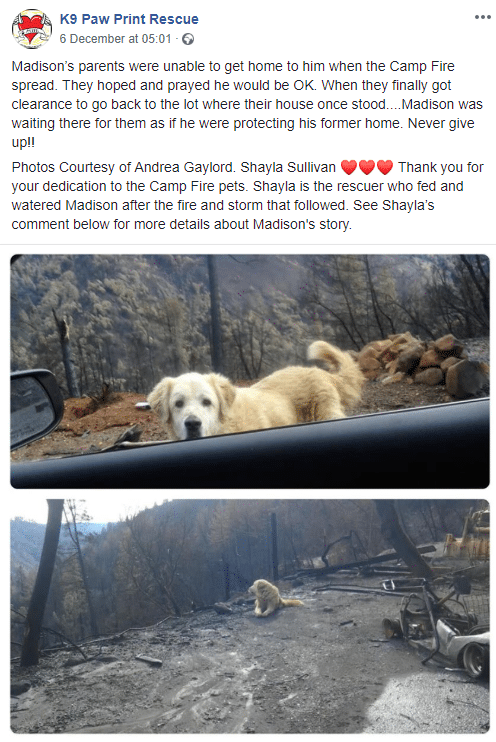 Andrea has had to leave Miguel and Madison on the property for now. She and her family are temporarily staying in a trailer park, and this breed of dog can’t be confined.

“Anatolian shepherd dogs are from Turkey and have been bred for thousands of years to protect and guard livestock, their property and their humans,” Johnson said. “Livestock guardian dogs like Anatolian shepherds are working dogs that are appreciated for their loyalty, their intelligence and their independent nature and Madison is a perfect example of a livestock guardian dog. He braved a natural disaster and went right back to where he belonged and stayed there until his owners and working buddy returned.”

How did Miguel and Madison survive the fire? Sullivan thinks that it’s because they managed to outrun the fire and then circle back home.

A good lesson to learn from this is that if you are forced, by circumstances beyond your control like flooding or wildfires, to leave your animals at your home, make sure they’re outside, and try to get back as often as possible to leave food and water. Animals are survivors and in the right circumstances, they’ll choose to stay near their homes.