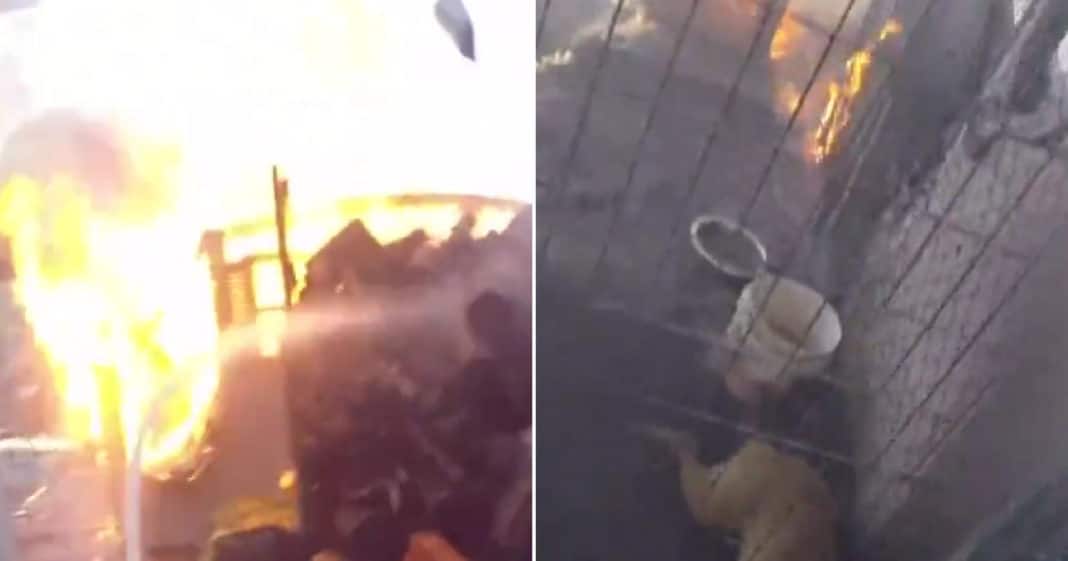 What would you reach for if your home were on fire? Other than saving yourself, your family and precious items, what about your pets? What if your residents caught fire while you weren’t home and you had to rely on the diligence and quick actions of firefighters? The owners of a home in Stockton, California had to depend on rescuers when their home burst into flames.

The house was a total loss; firefighters struggled to extinguish the flames and to stop them from spreading throughout the yard. There was a wooden dog house with a dog trapped inside a wire cage beside it. The department caught this intense rescue on video as firefighters worked to save the dog.

Some firefighters broke into an adjoining yard to work to contain the flames. Some rooms in the home were inaccessible; thick high flames prevented them from searching them for survivors.

One firefighter prevented the flames from consuming a nearby shed. that was when he noticed the trapped dog.

Caged inside a wire run, the poor pooch lay huddled in the farthest corner. The little guy did all it could to stay away from the flames that started to char his doghouse.

“Hey, we got a dog out here,” a fireman yelled.

He put out the flames, angling the spray so it would douse the scared dog too so it wouldn’t catch fire.

The dog was lying there, panting in the dirt. smoke swirled around him. The first fireman received help from a buddy. The second rescuer bent down to pick up the pooch. The terrified pup snapped at him, but he was too lethargic to move. Thankfully, the only problems this pooch had was smoke inhalation. The fire could’ve killed him. Thanks to these observant firefighters, he’s going to be all right.