Dog Sleeps On Streets For 11 Years, Then Wakes From Nap To Find Whole World Changed 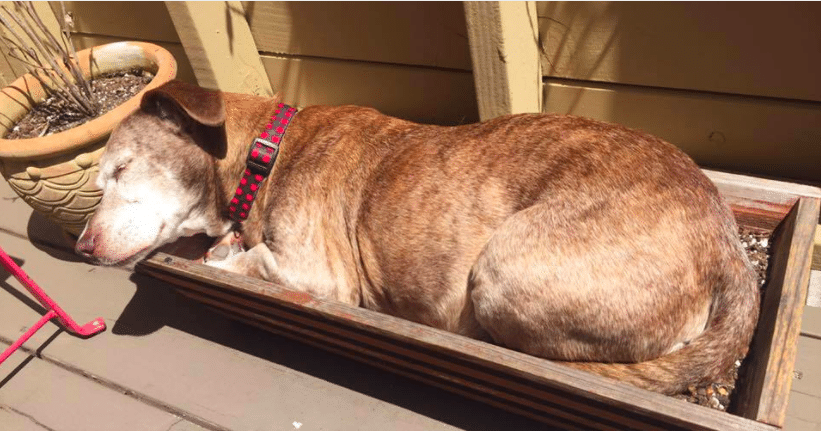 For a dog living on the streets, life is tough. These strays must be agile and street savvy. One dog managed to survive for over 11 years on his own as a stray on the streets of Los Angeles, but, as often happens when dogs age, he began to slow down.

This poor pooch became exhausted and ill. He took refuge on the porch of a stranger’s home, curling up to take a nap and hoping a kind person lived there.

Thankfully, he picked the right house. The woman who found him didn’t banish him. She took him in and named him Solovino, which in Spanish means, “he who came alone.”

Solovino remained at his makeshift home for days. The woman contacted Rocket Dog Rescue. Based out of San Francisco, this rescue group takes in animals and re-homes them. It embraces dogs who would usually be euthanized at regular shelters.

The well-tempered dog was taken to the rescue, treated, and then put into a foster home. Sadly, his foster placement didn’t last long. Solovino was returned and fostered to different homes for over a year and a half.

When Carol Messina read Solovino’s sad story online, she immediately fell in love with the old boy and decided to adopt him. A life-long Star Wars fan, she shortened his name to Solo.

Messina anticipated Solo’s integration into her home would go well, but the weather-beaten old dog – used to being on the streets – had difficulty acclimating to life with her. Shy and apprehensive around humans, Solo had trouble believing that Messina would be able to give him the happy and safe life he so deserved but had never experienced.

“When he first came to live with me, he kept his tail between his legs for months,” Messina recalled. “He was very non-reactive to dogs and people and cats, and flinched anytime anyone tried to pet him.”

It took compassion and loads of patience to help Solo become more comfortable. The poor dog had unresolved health issues – Messina discovered he had a hearing impairment that was much worse than everyone initially thought. She realized that the timidness and jumpiness she had noticed wasn’t caused by fear, but by being startled by people around him out of his range of sight.

Solo also had dental problems that caused him to be lethargic and in constant pain. Putting off her own planned surgery, Messina paid to have Solo’s teeth repaired. Now he’s a much happier and playful dog. He’s even made a best friend in the neighborhood – a dog named Bailey, whom Solo visits often.

Considerate of his severe hearing loss, Messina purchased a vest for Solo that says “Deaf dog.” This is to let people know to be careful around him. She also helps Solo in other ways. When entering a room, she’ll flicker the lights so he knows someone is there. She also intends on moving to a one-level home so Solo won’t need to navigate stairs as he continues to age.

Thanks to Solo, Messina has become inspired to take in other older dogs and give them a happy life for as long as she can. Despite all his health problems, she’s going to love and care for Solo so he’ll have a life filled with all the joy and pleasure he spent the majority of his life without.

Were you touched by the way Messina has taken Solo in and cared for him in his old age? So share this!