Dog Shot, Hit With Hammer And Left For Dead In Ditch In Middle Of Winter – 3 Weeks Later A Miracle Happens 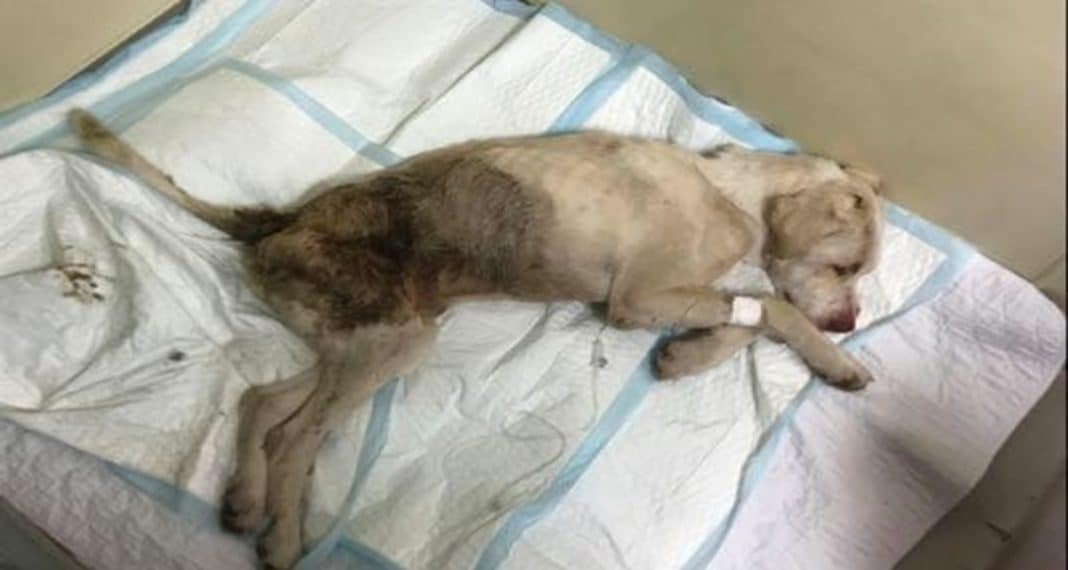 For those working in animal rescue and animal rights, they see the sad and heartwrenching scenes most of us can’t fathom. They must do their jobs to bring the animals to safety and to a place where they will receive medical care. And when possible, bring those responsible for abandoning or abusing them to justice. But sometimes, these folks can’t hide their dismay at what they observe.

Winters in Missouri are harsh and brutal. Rescue worker, Katrina Campbell couldn’t believe her eyes when she arrived at a ditch one blustery day. Katrina fell to her knees as she took in the horrible site. It’s body beaten and still, a yellow Labrador lay at the side of the road. Its urine and feces caked its fur, burning its skin. Left for dead, this poor Lab remained unmoving for three weeks until a couple discovered him and sought help on his behalf.

“It was almost like lifting a carcass, there was nothing to him,” Campbell said of her first moments with the dog later named Trooper.

It was initially thought the dog had been run over. But his situation was worse than they could’ve imagined. Someone shot him, leaving the poor boy paralyzed; for good measure, they then struck him over the head with a hammer before throwing him in the ditch.

“I got down on my knees, kissed him on the head and said a prayer over him,” Campbell recalled of her first moments with the dog.

“That’s when he lifted his head, and he licked me on my face, and I knew right then, I had to fight for this dog.

”The brave dog captured the hearts of everyone at Missouri K9 Friends. They rallied behind Trooper, showing him love and giving him the best care possible. It’s unclear whether he’ll walk again, but the kind-eyed Lab has more than lived up to his name.

As Trooper fought to recover, Mandy Ryan, president of the rescue Missouri K9 Friends, began her search for the individual responsible for harming the sweet Lab. Her investigation led her to 56-year-old Jason Edward Hampton. Hampton confessed to shooting the helpless dog.

“He answered the phone, I introduced myself, and I asked about Trooper, and he immediately stated, ‘well, I’ll tell you right now it was me,’” Ryan recalled of her conversation with Hampton. “I shot that dog, and I hit him in the head with a hammer.”

According to Ryan, the laws in rural Missouri aren’t clear-cut; residents can shoot an animal if it wanders onto their property and behaves in a destructive manner.

The Riverfront Times reported Hampton meant to shoot trooper near his foot. He missed and hit him in the neck instead. He intended to put him out of his misery by striking him with the hammer.

“He didn’t feel bad about hitting the dog in the head with a hammer, he just confessed it like it was nothing,” Ryan said.

Hampton has since been charged with second-degree animal abuse. His bond has been set at $10,000.

Meanwhile, trooper’s recovery has been slow; fundraising efforts have been taken to raise money for his medical bills and care. This dear boy won’t have trouble finding a new home. the shelter has received over two-dozen adoption applications.

Trooper is feeling tired, he had a BIG day today, his first Physical Therapy appointment and it went great! He did some range of motion, had some electrical stimulation and got a massage. The PT said he did great and is living up to his name.

Justice doesn’t always win the day. This is one story where I’m glad trooper came through, and Hampton will pay for his crimes against an innocent animal.