Dog Saves Fawn From Drowning, But It’s What He Does After That Really Has People Talking 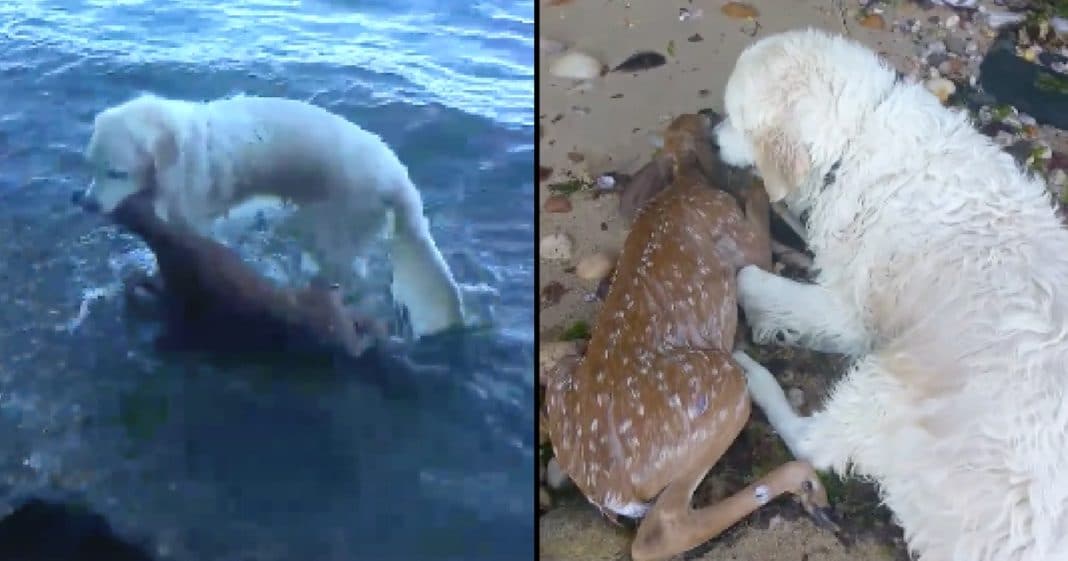 We often judge a dog’s intelligence by his ability to learn tricks and follow human commands. But when a dog reacts on his own and takes matters into his own hands for the good of another, that not only shows a high level of intelligence, but also a high level of compassion.

Mark Freeley and his golden retriever Storm were walking on Long Island South at PJ Harbor when they noticed something moving in the water. Freeley realized it was a struggling fawn.

Storm, acting entirely on his own, ran into the water and began swimming towards the fawn.

But the rescue didn’t stop there. As you can see in the video below, Storm began licking and attempting to stimulate the tired and water-logged fawn.

After the rescue, Freely called Strong Island Animal Rescue League to report the incident and to ask them to check on the deer. When rescuers arrived on the scene, they found the fawn had made her way back into the water.

“She was confused. I think she was completely out of it,” Erica Kutzing, one of the rescuers, said.

The fawn was retrieved from the water again, this time by human rescuers. According to the Rescue League, she is recovering in a quiet room and receiving care.

The League reports that “she will receive fluids, feedings, and when old enough she will be released back into the wild. She has a few superficial wounds from her exciting day but will survive.”

Kutzing, the rescue group’s co-founder, explains Storm’s behavior was what you would see with a mother dog rescuing her own puppy. “They grab them by the neck and carry them to a safe place,” she said. The only difference is that this was not her puppy, but rather another species.

A local rescuer summed it up nicely, sharing the lesson we humans can learn from Storm:

“If we just learn to treat each other nicely and look out for each other despite our differences, the world would be a better place.”

Way to go Storm, and thanks for teaching us humans by example!

Were you amazed at the way Storm rescued this drowning fawn? So share this!