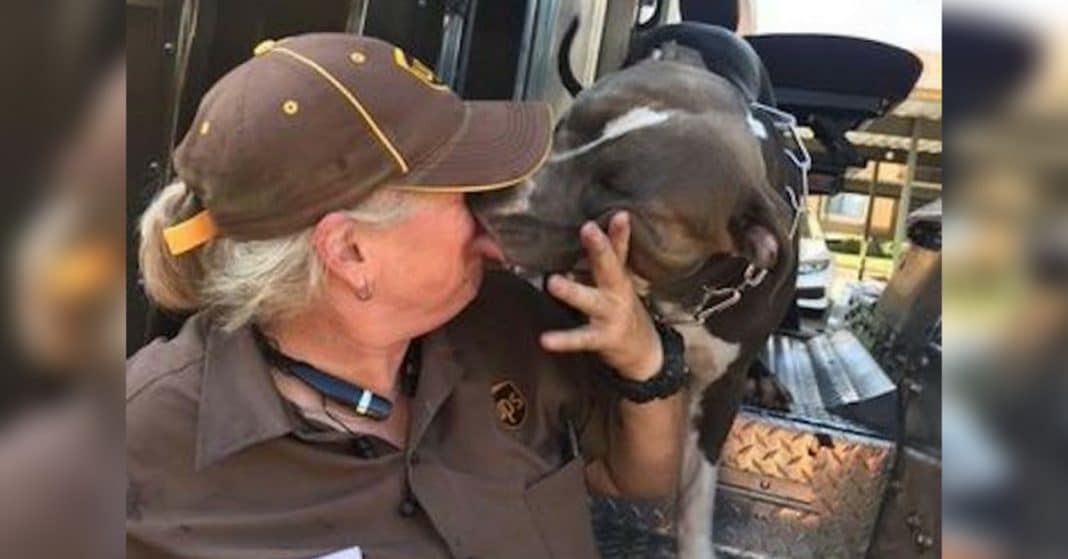 For many dogs, the UPS man or woman is seen as an intruder. I know this from personal experience – the four livestock guardian dogs on my farm inform us of impending deliveries long before I even see or hear the truck.

Like clockwork, that truck arrives about five minutes after the dogs start staring down our rural country road, occasionally barking to inform me of the “intruder’s” arrival. To them, I imagine, the delivery man is seen as a threat – someone coming to our home, leaving boxes, and rushing off.

Thankfully, our UPS driver takes it all in stride and I, of course, keep the dogs either inside or in the livestock pasture.

But such a relationship is not the case for a caring UPS driver named Katie Newhouser and a pit bull named Leo from Rancho Cucamonga, California.

“Leo would always start barking as I pulled into the condo complex,” Newhouser said. “He would always jump into my truck when I stopped.”

Sadly, Leo’s owner, Tina, passed away. Newhouser learned of Tina’s untimely death from a Facebook post. When she saw the sad news, she knew she had to check on the wellbeing of her canine friend.

Newhouser contacted Tina’s son, Cannon, who had gotten Leo for his mom when he was a puppy. Cannon is a Marine and could not keep the dog, so Newhouser immediately stepped in and offered to foster Leo.

It wasn’t long before the bond between Newhouser and Leo grew even stronger and she decided she wanted to add him to her family, which already included three other dogs.

Describing the new addition to her existing dog family, Newhouser explained, “It was probably confusing for [Leo] at first. He has adapted well. He and his brother Moose are inseparable. Bailey, his sister, has taken a while to come around. They actually play now. Once Leo was introduced to the house, the whole vibe changed.”

“He loves going for rides,” she continued, “he loves the water, he loves playing with his chew toys, he loves tormenting his two feline sisters, he loves laying in the sun, he has no concept of personal space. He likes to be on us or right beside us! He is a character.”

What started out as a tragic situation turned out “happily ever after” for Leo thanks to this caring UPS driver. Newhouser and Leo quickly formed an even tighter bond once he came to live with her, a bond that will not be broken.

“He has so much personality, you would think that he is human!” Newhouser proudly proclaimed. “He is the sweetest most lovable dog that you will ever meet.”

Were you touched by what this UPS driver did for this orphaned dog? So share this!