Dog Abandoned In Crack House, But Watch What Happens When Firefighters Take Her In… 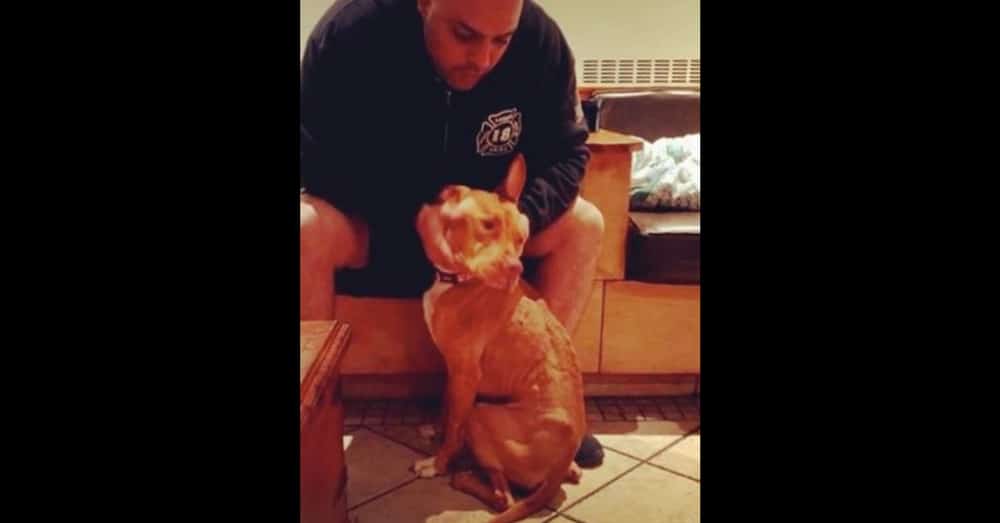 When animal rescuers (and fiancés) Erica Mahnken and Michael Favor found a pit bull in an abandoned “crack house” in Staten Island, New York, last month, they couldn’t believe the condition she was in. The poor dog was skin and bones and covered in cigarette burns. She had been left without food, water, or heat in the dead of winter.

“We didn’t ask any questions when the person called us and told us the dog was alone,” Erica said. “It was freezing out. There was nothing in the house. No, we didn’t think about it — we just ran and got her and said we’ll figure out what we were going to do after we got her out of there.”

Erica and Michael started a foster-based rescue organization called No More Pain Rescue with their friend Lara Ribeiro a year ago. But when they found the dog, named Ashley, they didn’t have any open housing. That’s when they decided to call some firefighter friends of theirs from a Lower East Side FDNY station called “Fort Pitt.”

The fire station had previously housed a Rottweiler and they agreed to temporarily house Ashley until a more permanent home could be found. They didn’t expect to fall in love with the pit bull, but that’s exactly what happened!

Three days later the firefighters called Erica and asked if they could adopt Ashley. Her answer was a resounding “Yes!”

?Suns out guns out ??…taking after my senior man @engineman15 (Mike Grieco)…working in the engine today ..I got enough slobber to put out any fire ?? #fortpitt #pittbull #engine15 #rescuepup

“My heart wants to explode,” she said later. “Everyone’s so quick to judge a dog, especially a dog you don’t know where it came from… It is very satisfying.”

“Ash” has quickly become a part of the Fort Pitt family and even has her own Instagram page where thousands of fans eagerly follow her progress each day. Even though she was about 25 pounds underweight when she first came to the fire station in January, she has put on a lot of healthy weight in the past month and is well on the road to recovery.

Hey cap! the rig is checked ready to go ???… I know I know..no bunker gear in the kitchen… #Fortpitt #pitbull #pittstreet #rescuepup

Now Ashley hangs out with the fire crew at the station and rides along with them when they get calls. She even has her own special spot on the fire truck!

10-8 and available in lower manhattan

Erica makes frequent trips to the fire station to check up on Ashley and is thrilled with her progress.

“Whenever she’s there her tail is wagging, she’s super friendly and jumping on everybody,” Erica said. “She’s really lovable.”

Were you happy to see the happy ending to Ashley’s story? So share this!