Doctors Tell Mom She Has Days To Live. What Happens Next Is Nothing Short Of A Miracle 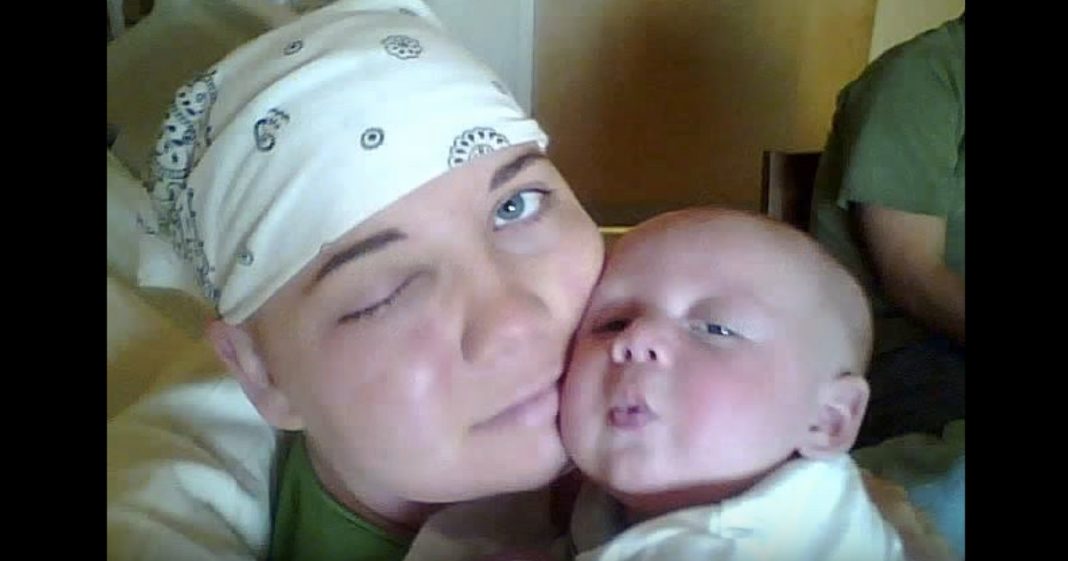 A month into her pregnancy, though, a knot at the back of Ashley’s head became hard and painful.

“I actually discovered [the knot] right before I got pregnant,” she said. “But I wrote it off to be a lymph node because it didn’t really hurt.”

As the pain got worse, though, she decided to get it checked out, and what the doctors told her was devastating.

“Pathologists from all over the country studied the lump,” she said. “They all agreed that it was a rare and very aggressive, possibly hormonally fueled cancer. But nobody could diagnose it.”

What happened next was the first of many miracles this family would experience.

“We were preparing for our son to spend time in the neonatal intensive care unit,” she said. “But when he was born, he didn’t have to. He got to go home two days later. The NICU doctor came in to see us, and he said that never in his career had he seen a 33-week term baby not go to the NICU, even for evaluation. That was just a miracle.”

Ashley underwent surgery to remove the mass just four days after giving birth to her son. Five weeks later came another blow – the cancer had spread to her brain, lungs, and liver. She was diagnosed at Stage 4.

Doctors told her the brain tumor was inoperable and the cancer was continuing to spread.

“At that point, they stopped trying to figure out what it was, saying, ‘We need to start treating her, or she’s gonna die,’” Ashley said.

They gave her the lifetime maximum amount of radiation in just six weeks, but the tumors kept growing.

Ashley knew she was beyond medical help. All she could rely on was her faith.

“In February or March 2008, at my church, they started praying and fasting, for the whole month,” she recalled. “I continued chemo through July 2008, and then had more scans to check progress. I was praying because if there was no change or things were worse,  I would be out of options.”

Doctors told her to start recording every memory with her family so they would have something to remember her by when she was gone.

Then, a second miracle.

Ashley went back to the doctor for more scans, expecting to hear that the cancer had spread even further. Instead, the doctor told her something that left her completely floored.

“They said, ‘The radiologist report shows no evidence of disease present,’“ Ashley recalled. “I was so dumbfounded by what she said that I was like, ‘What does that mean?’ She said, ‘It means you’re in remission.’”

Even her doctors were dumbfounded.

“Theoretically, with stage 4 cancer, you’re not curable,” said Ashley’s medical oncologist, Dr. Debra Miller. “I met Ashley when she was pregnant, when she had the neck mass. After her first round of treatment, more disease was found in her lungs, and she was retreated. After that, she’s been disease free … it’s nothing short of miraculous.”

But God wasn’t finished with this family yet!

Even though doctors told Ashley she would never be able to get pregnant again, she has had two more children since her recovery – a boy in 2013 and a girl in January.

Ashley said she wants her incredible story to bring hope to those who are going through similar dark times.

“I just want to spread hope,” she said. “When I speak at churches, I speak about the fear. The fear and uncertainty, especially not knowing what I had. It’s scary.”

“I want to give people the strength to go on,” she continued, “even when it comes to infertility. And if that’s what I could do in life, I would die happy one day.”