Doctors Tell Dad He Can’t Go To Graduation, But When She Walks In…Tears 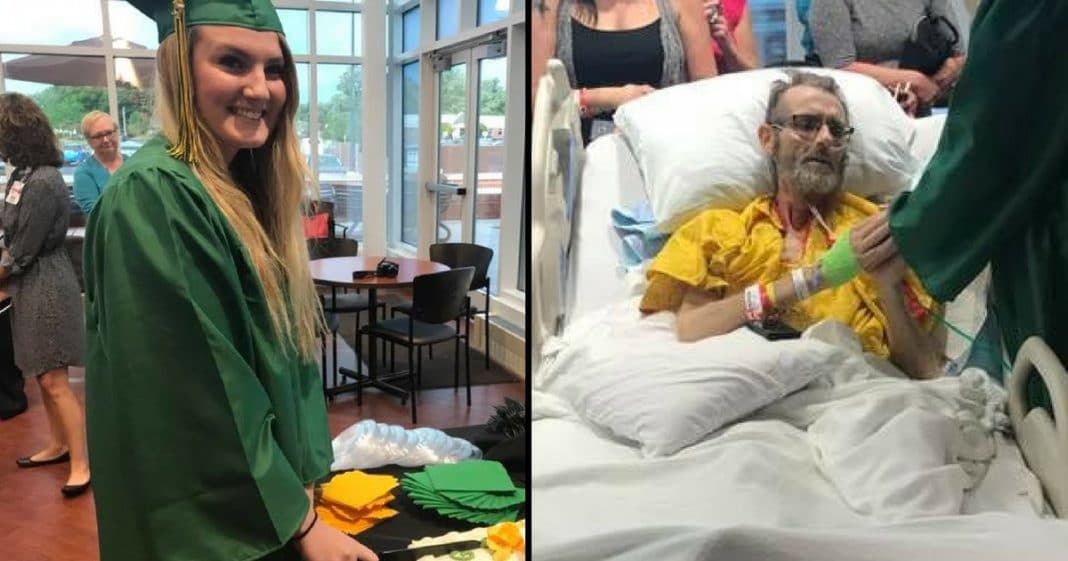 One of the proudest moments of a parent’s life is watching their child walk across the stage at graduation to receive their diploma. All the years of hard work have finally paid off.

Larry Bailey had been looking forward to watching his daughter, Hollie, graduate from Floyd Central High School for a while, but then came a roadblock he hadn’t planned on.

Larry was diagnosed with esophageal and liver cancer and has been battling it bravely, but his health was declining and his family didn’t know how long he would have. They made Hollie’s June 4 graduation a goal – Operation: Get Dad to Graduation.

Sadly, on May 26, doctors told Larry there was no way he would be able to leave the hospital to go to the graduation. He was heartbroken.

Knowing how much it would mean to Hollie and her dad for him to see her graduate, her boyfriend, Brady Esarey, and friend, Sophia Palmer, talked to their principal and came up with a plan to hold a special early graduation ceremony for Hollie at the hospital.

With the help of hospital staff, who baked a cake, and Kroger, who donated flowers, they transformed the Baptist Health Floyd cafeteria into a graduation stage. Then they wheeled Larry down in his hospital bed for the special event.

There wasn’t a dry eye in the room as Larry clutched Hollie’s hand and whispered, “I’m so proud of you.” Then principal Rob Willman presented Hollie with her diploma.

While the night was bittersweet, it was also full of wonderful memories that the Bailey family will be able to hold onto and cherish forever.

We don’t know what these next days, weeks, or months will hold, but this special family will be in our thoughts and prayers.

Were you touched by the lengths Hollie’s friends went to to make sure her dad got to see her graduate? So share this!