Man In Coma After He Stops Breathing, But Watch What Happens When Dog Walks In 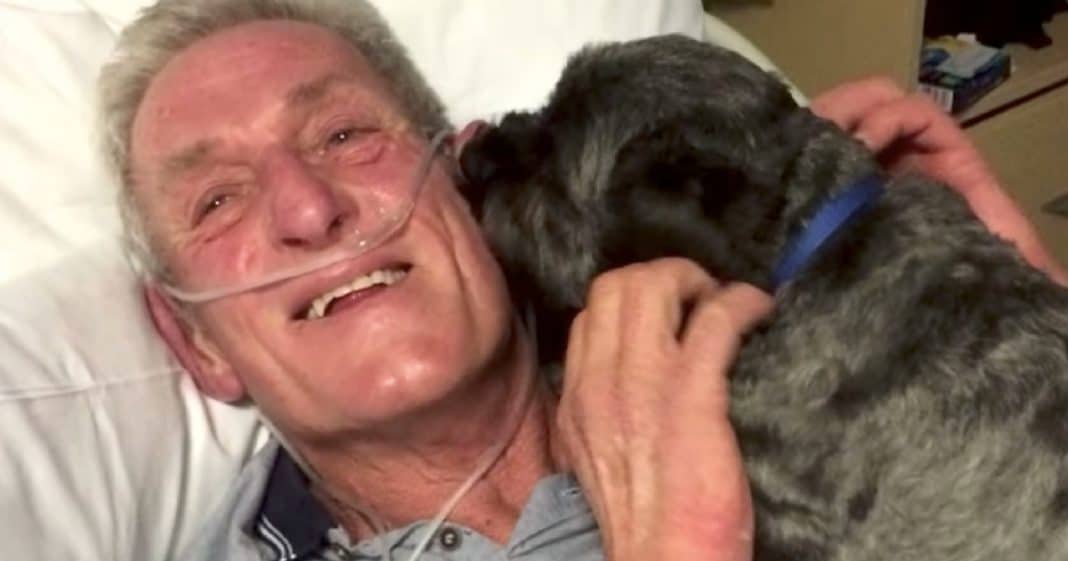 Anyone who has loved a dog and has been loved right back can attest to the strong bond shared between species. Sometimes that bond can even have great healing consequences, such as in the case of this 62-year-old man from Scholing, England, and his 4-year-old schnauzer/poodle mix named Teddy.

Cancer survivor Andy Szasz was hospitalized in December for pneumonia. When he stopped breathing, doctors at the Southampton General Hospital placed him in a medically induced coma.

He was supposed to be in the coma for three more days, but Andy’s wife, Estelle, decided she would bring in their dog, Teddy – all dressed up in a bow tie – to provide comfort for her husband, even if he wasn’t conscious.

Hospital staff usually only allow pet reunions to happen in the hospital courtyard, but they compassionately made an exception for Teddy, letting him into Andy’s hospital room.

That’s when something truly miraculous happened. When Estelle brought Teddy into the room, the little guy barked and, moments later, Andy awoke! Doctors were stunned.

Teddy’s service to Andy didn’t end there. Estelle brought him back in during her husband’s recovery stage, and she believes having Teddy there helped Andy to heal faster.

“There’s no doubt that talking to Teddy every day after Andy woke up sped his recovery,” she said. “Being able to take him in gave Andy that drive to recover much faster than the doctors expected.”

Teddy’s therapeutic influence on Andy did not go unnoticed. The U.K.’s Royal Society for the Prevention of Cruelty to Animals, also knows as RSPCA, gave Teddy an award under the special animal category.

Andy, a proud human dad to Teddy, said, “Ted is such a remarkable little dog in many ways. He’s clever, loving, loyal, funny, and a right little character.”

It should be noted that Teddy is a rescue dog. He was adopted by Andy and Estelle shortly before Andy fell ill with cancer and was the perfect companion during that difficult time.

“Teddy is such an incredible lovely and loyal dog,” Estelle said affectionately, “and he’s always had a special relationship with Andy.”

I guess Teddy figured that, after being rescued by this sweet couple, it was now his turn to return the favor.

Watch and enjoy this video about a very special bond between a dog and his best friend.

Were you touched by the sweet bond between Andy and Teddy? So share this!