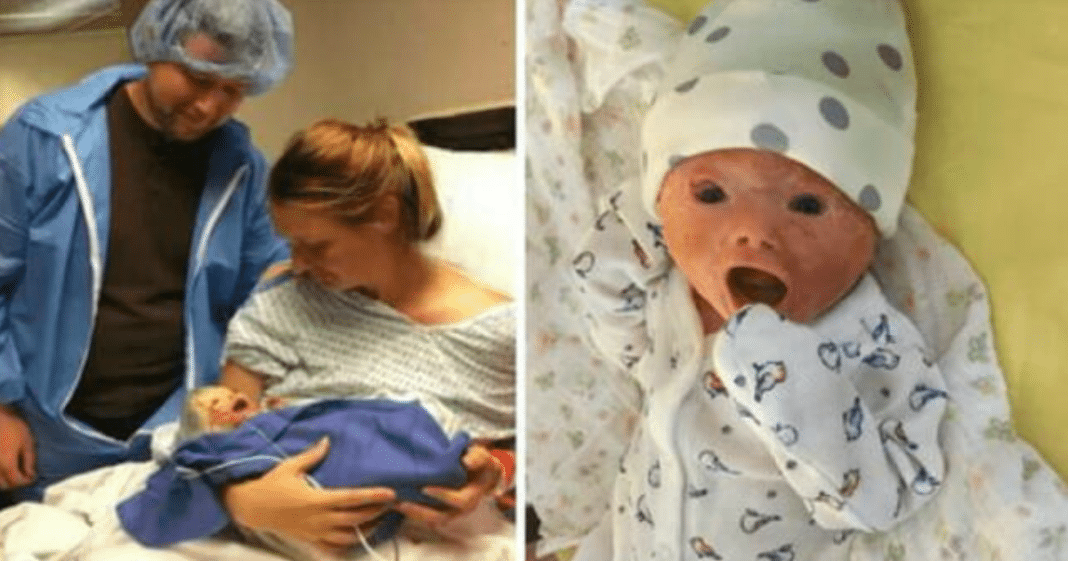 For many women, pregnancy can be a very tough time.

In addition to the physical changes, there is also the constant fear that something could go wrong.

Thankfully in many cases, the worries and fears are exchanged for relief the second that you hold your child for the first time.

Jennie Wilklow never got to experience that opportunity of relief when she welcomed her daughter into the world.

There was no indication there would be anything different with the baby’s health when she was in the womb, but what happened to her skin minutes after she was born changed the course of her childhood.

The cloud of worries began when Jennie was forced to have an emergency C-section in week 34 of her pregnancy. Although the operation and childbirth were successful, it would soon turn out that something was wrong with Jennie’s daughter.

“When they took her out I heard her scream and they said: ‘She is so beautiful.’ These are the words every mother wants to hear, so I smiled and relaxed,” Jennie shared.

But seconds later, the mood completely shifted in the room. The infant’s face had appeared to transform.

Several nurses and doctors seem panicked as they watched what was happening to the brand new baby.

“They did everything to help her, but her skin became rock hard in seconds. After the skin solidified, it began to crack. It caused open wounds throughout her body. Behind the smiles I saw their panicked faces and I asked if everything was OK.”

After the doctor assured Jennie that they had things under control, they gave her more anesthesia, and she was in and out of consciousness over the next several hours, only waking to ask for her husband.

“He just said, ‘It’s bad, […] but I looked into her eyes and she has the most beautiful soul,’” Wilklow said. “At that point, I had no clue how critical she was.”

A nurse I will probably never be able to thank gave me this picture. I was still in the operating room when they called him out they told him something was wrong and showed him our baby. In a moment of absolute despair they locked eyes and a nurse took this with his phone. After when they had to tell me the news he was visibly upset and I didn’t know the extent of her wounds they left and I asked how bad. He replied "it’s bad, but I looked into her eyes and she has the most beautiful soul" every single time I look in her eyes I remember that moment. #harlequinichthyosis #ichthyosisawarenessmonth #ichthyosisawareness #vassarbrothersmedicalcenter @foundationforichthyosis

Their daughter, Anna, was born with a rare condition called harlequin ichthyosis, a genetic disorder that causes babies to be born with very hard, thick skin covering most of their bodies.

The disease is a gene defect that causes the skin to grow about 14 times faster than normal. It creates a redness all over the body, which also affects the eyes, mouth, nose, and ears.

I had a fever all night last night and I haven’t held my baby in over 24 hours ?I am sharing a couple of pictures from this time last year. #mywholeworld #harlequinichthyosis #fighter #love

Children born with Harlequin ichthyosis usually die a few days after birth. However, those who survive can expect a normal lifespan. Unfortunately, they are also prone to suffer from complications and delays in development, especially when it comes to motor skills.

Doctors at her local hospital said little Anna was bound to get an infection and they would opt out of treating it to let the newborn pass naturally. But her family got in contact with a specialist on the disorder and sent baby Anna to a different hospital that was more equipped to treat her skin.

“She can’t die, that wasn’t an option,” Wilklow said.

And it turned out, Jennie had given birth to one tough little girl. With the help of doctors and her family, Anna survived.

Why is being vulnerable so hard? Why does a moment in time stay with you no matter how much time has gone by? I remember this feeling so vividly because I still feel it every time I hold you. Realizing how much you can love a person comes only after you feel what it’s like to nearly lose them. The feeling of trust in life itself leaves you and never comes back, but then again you feel everything good ten times more then you ever thought possible. #harlequinichthyosis #liveyourbestlife #beattheodds #lovelife

To treat her skin, the 15-month-old spends about four hours in the bath every day – twice in the morning and twice at night. Once a week, her mom Jennie Wilklow bathes her in bleach to make sure her skin doesn’t catch an infection. When she falls asleep in the bath, Wilklow peels the thick skin off her head and body so it will heal properly in her older years.

One of my favorite pictures was on my memories from last year. She opened her eyes and stared at me and I couldn’t move. As I was posting I looked up and she was doing the same thing ♥️ sometimes I feel like our hearts are one and I love her so much it hurts. #harlequinichthyosis #myheartandsoul #ichthyosisawareness #thoseeyes

During the time Anna spends outside the bath, her mom covers her in Vaseline, Aquaphor and various other lotions to prevent her skin from drying out. Every day, Anna consumes 2,100 calories – the same amount of food as a grown adult – to help fuel her skin for the rapid growth process.

“I now understand that I got her because of the love I already carry in my heart for my daughter. Anna was meant for me, and I for her, and together we will show the world how beautiful it can be.”

When I was told my baby wouldn’t live very long, I gasped for air a sharp pain stabbed inside my chest and I knew if she died I would feel that pain forever. A forever open wound left on your heart unable to heal itself because with every thought of that child the pain comes back just as strong as the first time. Coming home a month later with my baby defying all odds I should have been over the moon, but instead I was taken down like one swift kick to the back of the knees. Laying on the ground helpless and not having control of my thoughts or feelings. A babies cry would send stress pulsing through my body like it was directly injected into my veins. Everyone sounded distant and at night my legs moved constantly as I rocked back and forth trying to calm my body and mind. Even as I write this I feel that terrible feeling and then I also feel guilt. Guilt because she is alive and I wasted a month of her life trying to get the right medicine and get back to the me that I knew was deep inside, stuck inside. I was lucky because my support system pushed me to get help and shortly after getting the right help I got me back. I will never miss a chance to cherish every second of every day with her again. ♥️♥️♥️♥️♥️♥️♥️♥️♥️I I was asked by @ppdjourney to post my story to help #shatterthesilence and hopefully shatter the stigma around #postpartumdepression #gethelp #dontwastetime