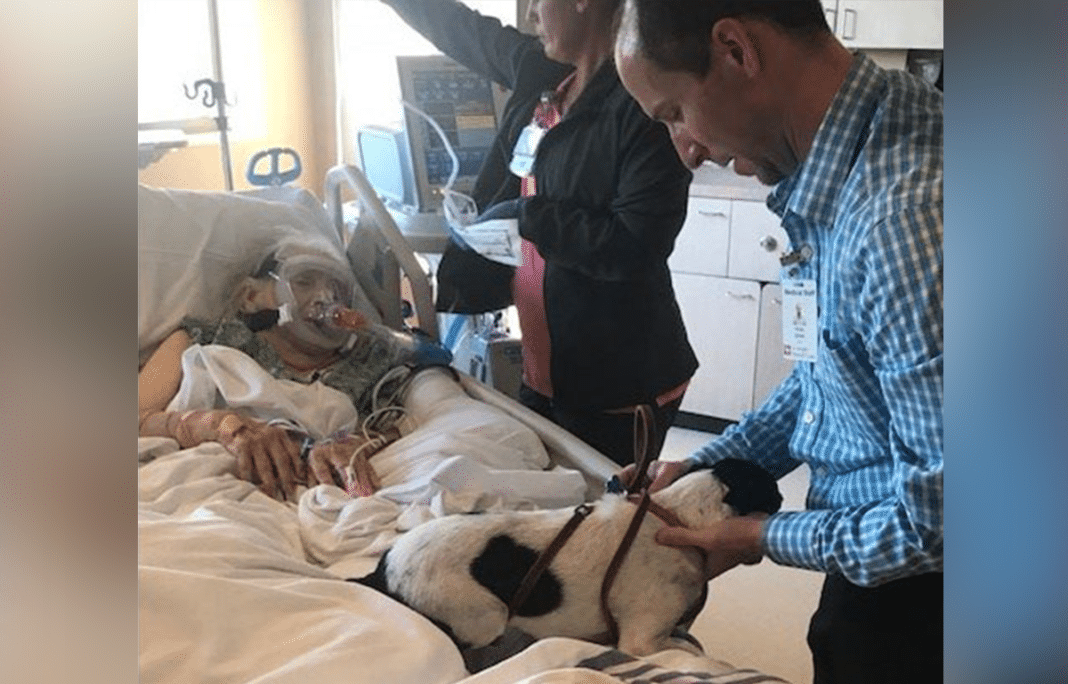 One Kansas doctor went out of his way to fulfill the dying wish for Mary, an 80-year-old woman who wanted to see her beloved dog Herman again before she passed away.

When Mary was taken to the hospital, her 11-year-old rat terrier was taken to a shelter because there was nobody else to care for him. Dr. Ryan Sears of Kansas City Medical Partners decided to track down Herman and reunite his dying patient with her pet one last time. In order to do so, he had to call all of the area shelters because Mary wasn’t sure where the dog had been taken.

Once Dr. Sears found Herman, he personally went to pick him up and bring him back to see Mary.

Herman is a middle-aged neutered male, rat terrier mix that was brought in by Leawood Animal Control after his owner’s…

The adorable terrier was so overjoyed to see Mary again that he wiggled all over her hospital bed.

According to Fox8 News:

“The instant that she saw him, she was wanting to pet on him, and you could see the change in her face that she was so happy to see her dog,” Sears said.

The staff wrapped Herman in a blanket so he could cozy up to Mary one last time.

“He wanted to be right up next to her,” Sears said. “We had to wrap him up in a blanket because he was just so much energy, and we had so many things going on at time.”

Dr. Sears said that the reunion provided her with the closure she needed.

“After she was reunited with Herman, Sears said, “you could tell that was enough for her to say, ‘I’m ready.’”

Mary was at peace after seeing her little buddy and knew he was going to be ok. Dr. Sears assured her that Herman would be in good hands and would find a loving home at the shelter. Then the next day, she passed away. Herman went back to the good folks at State Line, where they would help him with his separation anxiety.

Since none of Mary’s family or friends came forward to care for Herman, they searched for a home for the energetic and affectionate little dog. A family decided to adopt him, but then returned him three days later when they realized they couldn’t provide him with all the attention he needed.

It’s a situation that shelters see regularly. Sometimes dogs are abandoned when their elderly owners pass away and nobody comes forward to take responsibility for the pet. Finding a suitable home can be difficult since many potential owners don’t realize how much time and care an energetic dog like Herman (even at age 11) requires.

“Herman has been adopted and is loving his new home. Here are some pictures the new owner shared with us!”

As mentioned in a previous post, Herman has been adopted and is loving his new home. Here are some pictures the new owner shared with us!

Following news of what Dr. Sears had done, St. Joseph Medical Center praised him on Facebook.

“We would like to recognize Dr. Ryan Sears, with Kansas City Medicine Partners, for his selfless act of kindness. He went above and beyond for his patient to reunite her with her dog before passing away. He truly inspires us all. ????”

We would like to recognize Dr. Ryan Sears, with Kansas City Medicine Partners, for his selfless act of kindness. He went…

See the video from Fox8 News below: