Doctor Tells Pregnant Woman To Give Up Dogs, Her Response Couldn’t Be More Perfect 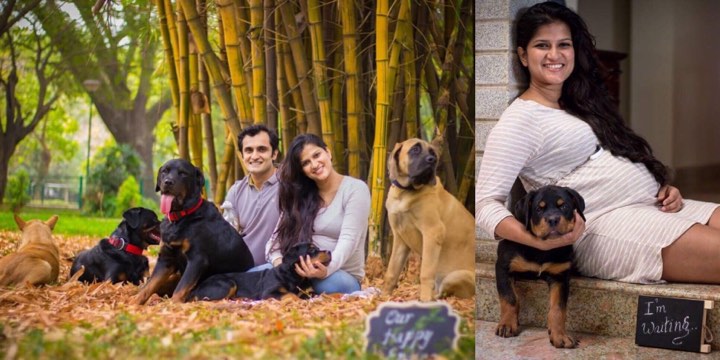 Sanjana Madappa works for Compassion Unlimited Plus Action (CUPA), a shelter in Bangalore, India, and has five rescue dogs all adopted from there. When Sanjana and her husband, Aditya Raheja, learned they were going to have a baby, they were like all first-time parents, ecstatic. And like most couples, they immediately announced the great news to their family and friends.

Friends, family and even her own doctor told the happy couple that they should give up all five dogs before their son arrived. They kept telling Sanjana that her baby came first, but she couldn’t imagine giving up five family members just to make room for one.

“I was told by my family, friends, and even my doctor to get rid of my dogs, that my baby came first,” Sanjana wrote. They were concerned for the safety of the baby, or that the dogs would demand too much attention.

“I don’t know how people can bring a child into the world, while letting go of another at the same time.”

Sanjana, who has worked with animals for years, had seen many dogs given up because of a new baby.

“I didn’t say much to people who told me to give them away,” she said. “I just nodded and smiled because sometimes you just can’t change opinions.”

Since so many people couldn’t seem to understand why she would want to keep her dogs despite being pregnant, she decided to show them. So, the husband and wife hatched a plan to include their babies in the maternity photo shoot. The shoot was a firm response to everyone questioning their decision; the dogs weren’t going anywhere.

The couple posed for a maternity shoot starring all five dog siblings, proving their dedication to their family – both human and canine.

“I had an unreasonably difficult pregnancy. My pregnancy became a high-risk one for pre-term delivery and I was restricted to the confines of my home,” Sanjana said.

“Taking care of my dogs ensured I never felt the need to blame my pregnancy, the baby, or my husband for the state I was in.”

Their son was born a week after the shoot was done, and because she refused to listen to people who doubted her dogs’ abilities to be good with babies, little Ayan now has five best friends to grow up with.

“My youngest pup sleeps next to his cradle while another always comes running to check in on him if he starts crying,” Sanjana said. “They are so gentle with him. They never jump on me if I’m carrying him or up on the bed if he is on it. I didn’t have to teach them this, they just knew.”

A lot of people have questioned my being a good mother because I let my son hang out with my dogs. I've been called…