Doctor Gasps As She Delivers Twins, Then Mom Realizes What Happened, Breaks Down In Tears 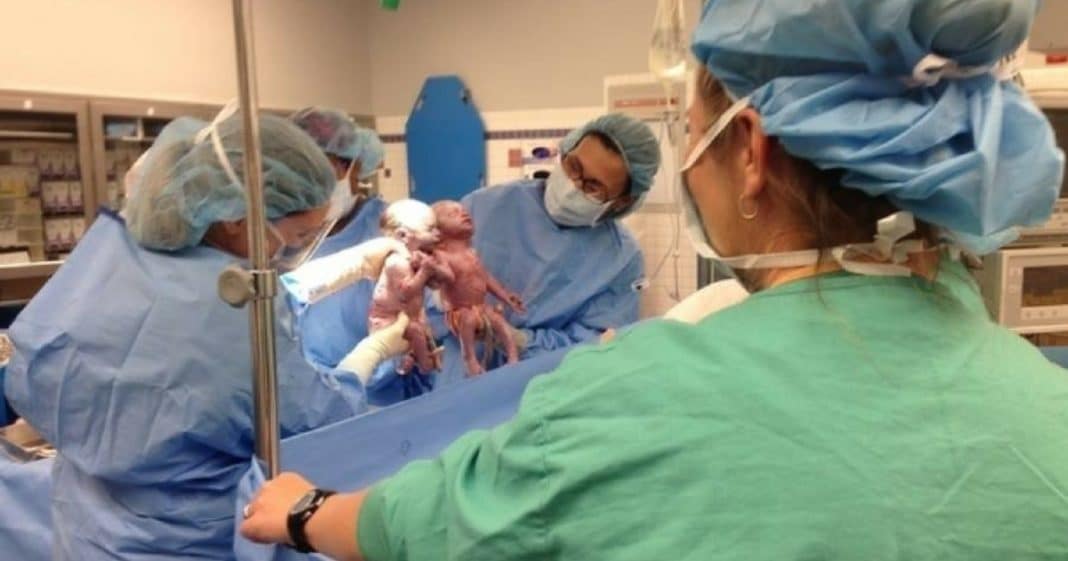 Back in 2014, Sarah Thistlethwaite, a math teacher from Orrville, Ohio, was excited to learn she was expecting twins. Little did she or her husband know they would have a long journey ahead of them before the twins were born. Sarah was put on bed rest for the majority of her pregnancy, but nothing could dim the couple’s elation.

“We were in shock – we sat there and laughed and then cried and then we would laugh again,” Sarah said.

Nineteen weeks into her pregnancy, though, they learned they weren’t only having identical twins, but Monoamniotic-Monochorionic twins, also known as “Mo-Mo” twins.

In this situation, which only occurs in one out of every ten thousand births, the fetuses share both their amnions, chorions, and placentas. Sadly, utero mortality rate is around 50 percent.

“It’s the rarest form of twinning and it carries the most risk,” explained Dr. Melissa Mancuso, director of the fetal treatment center at Akron Children’s Hospital. “Because they’re sharing the same amniotic sac, their umbilical cords can become tangled as they’re growing and moving which can cut off blood supply to one or both twins.”

Finally, on day 57 of her bed rest – 33 weeks into her pregnancy – Sarah underwent a Cesarean section.

But as the twins emerged into the world, Dr. Mancuso let out a gasp.

As the babies came out of the womb, they kept their hands clasped together.

“My heart just melted,” Sarah said. “Even my husband got tears in his eyes – I don’t know that anybody in the room had a dry eye.”

After so much worry and fear, it was a beautiful picture of the twins’ resilience and the love and bond they already shared, even as newborns.

It’s now three years later and the twins, Jenna and Jillian, are closer than ever.

“If one twin is crying, the other will try to find a way to comfort her. Like going to find a pacifier or rubbing the other’s back or offering a hug,” Sarah said. “They always take care of each other.”

Sarah truly believes her girls are lucky to have each other. She has complete faith that their bond will grow as they get older.

“Twins have this special bond, and I can’t wait to watch them grow up and be best friends,” she said.

Were you amazed to see the special way these twins came into the world? So share this!