Docs Turn Off Life Support After Baby Falls 40 Ft Out Window, Seconds Later He Breathes On His Own 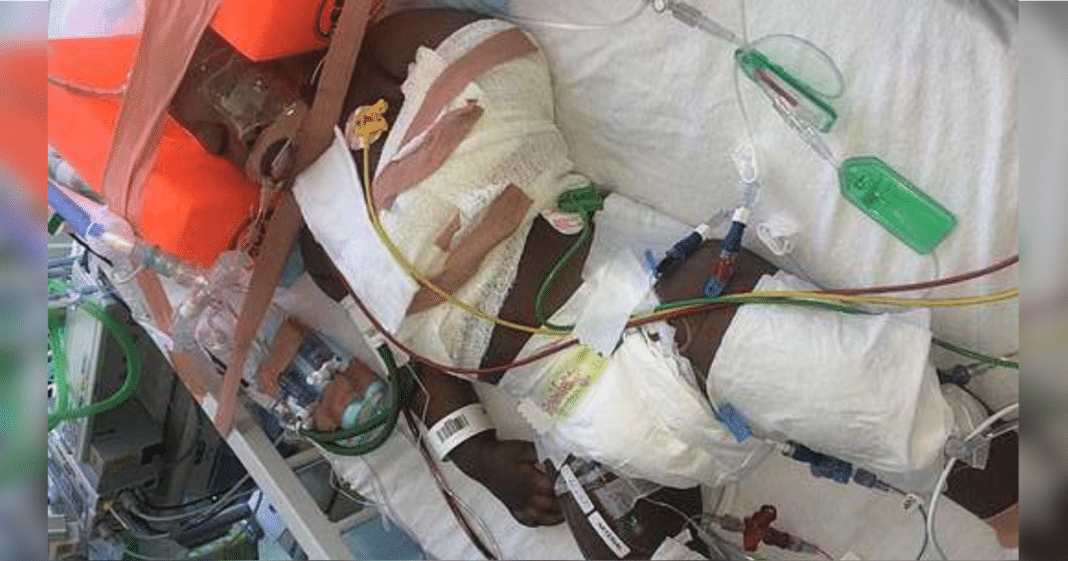 Anwar Nyanzi is nothing short of a miracle.

11-month-old Anwar defied the odds when he survived a horrifying accident. “The miracle boy” had snuck past his aunt, got up onto a chair, and fell out an open window, tumbling 40 feet to the ground below.

Anwar’s mother, Hawa, recalls the nightmarish day her son fell. She remembers being told not to even look at her precious baby because of how badly hurt he was.

“My sister called me to tell me. I couldn’t breathe,” she said. “I was in floods of tears. I went to work that morning and my son was happy and healthy, but I was told he was dying a few hours later. I caught the bus and spoke to the paramedics on the phone. They told me to hurry to the scene and I feared the worst. I just collapsed and thought ‘God help me.’ They almost pronounced him dead at the scene. I just wanted my son back.”

Thankfully for Hawa, the desperate prayers of a mother were heard.

After Anwar got to the hospital, doctors gave the boy a mere 1% chance of survival. He’d suffered terrible brain, spinal, and neck injuries and his tiny body had numerous broken bones. The family was told to gather to say their goodbyes.

After four days in the ICU, the medical team at the hospital switched off Anwar’s life support, realizing there was nothing more they could do to help the critically injured baby.

Miraculously, Anwar suddenly began to breathe on his own after the machines were switched off. Even more incredibly, doctors soon realized that, in spite of all the odds, the baby had both his sight and hearing. Within a matter of weeks, he was crawling and standing again.

Despite the terrifying ordeal, Anwar is now a perfectly normal, happy, and healthy 2-year-old.

“I was told to prepare for the worst, but now here he is, playing with his toys at home and singing like any other child. It’s a miracle,” Hawa said. “I never gave up hope. I knew my son was a fighter.”

Watch the video below to see how the toddler is doing today!