He Gets In Horrific Crash On Way To Buy Flowers. When She Comes In He Can’t Wait Any Longer… 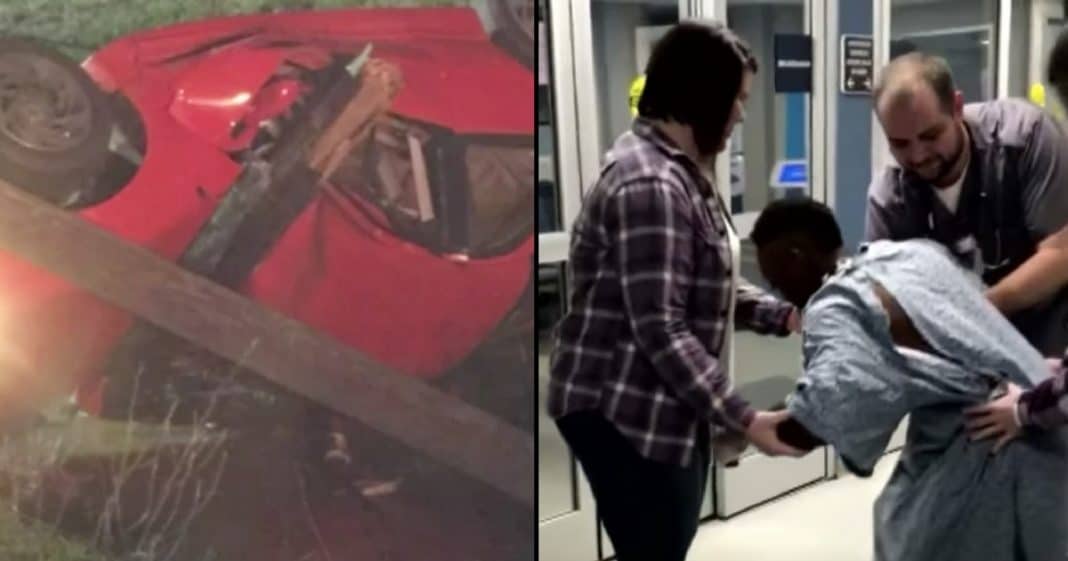 We love sweet proposal stories and, while the setting for this one might not seem that romantic, the story behind it certainly is.

Jamacio Kimble and Kayla King had been dating for almost a year and Jamacio thought their one-year anniversary would be the perfect time to pop the question.

“The original plan was that night at church we were going to have our youth and college career class get together and have roses and music and the lights off, and I would be in the middle of the room,” he said.

He was on his way to pick up the flowers, though, when the unthinkable happened.

The roads were slick after recent storms and, as he went to make a turn, he hydroplaned and lost control of his car. He crashed down an embankment and ended up with a utility pole through his window.

Jamacio managed to break his way out of the car with his baseball bat and, thankfully, several of his baseball teammates were driving behind him and immediately called for help.

Jamacio didn’t come out of the wreck unscathed – he punctured his thigh, hurt his hand, and is covered with bruises – but he did make it out alive, and more determined than ever to propose to the woman of his dreams.

“If you look at the car, the pole was in my front seat and passenger seat, and I could have died on my way to ask the girl of my dreams to marry me,” he said. “I was like ‘I could have died not asking that, so while I have breath, I’m going to ask that.'”

When Kayla came to see Jamacio at the hospital he enlisted some friends to help him get out of bed and down on one knee.

“I am sorry for how the night went,” he told her. “The original plan was I was going to propose to you at church but the table has turned so…”

Did you love watching this sweet proposal as much as we did? So share this!