Desperate Man Searches For Age 96 Grandparents After Fire. 3 Days Later A Stranger Recognizes Them On TV 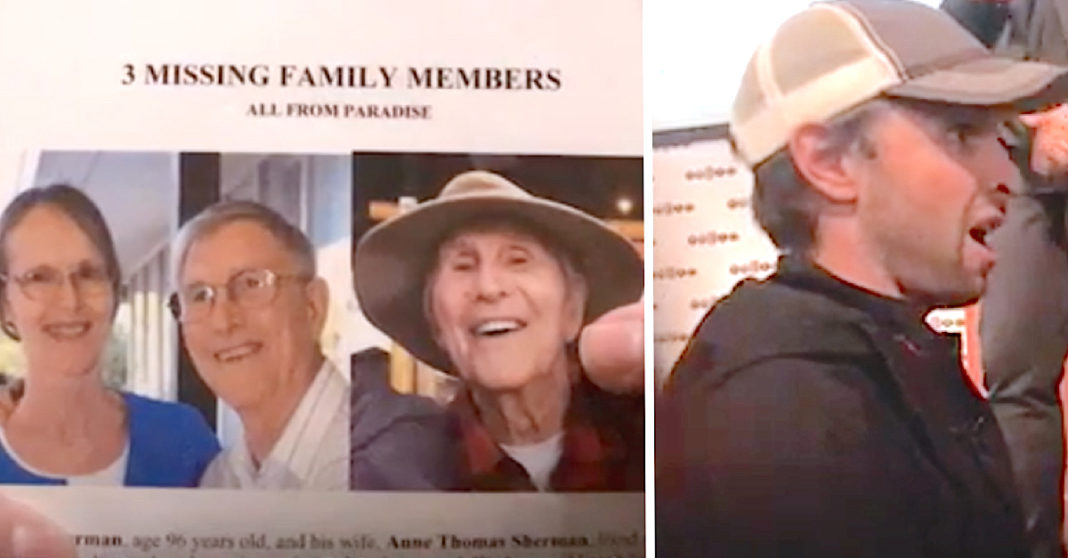 Catastrophic wildfires have recently been spreading throughout California, leaving hundreds of homeowners and families in despair. Many have had to spend long hours searching police hotlines, social media, and emergency shelters for friends and family members from whom they had been separated.

John Warner was one of those people. He was frantic with worry when he found out that his grandparents, Fay and Anne Sherman, both aged 96 and his grandfather a World War II veteran, had lost their home in Paradise, California, a small scenic town in the Sacramento Valley. The Camp Fire death toll had reached 42, the deadliest wildfire in California’s history. John was four hours away.

The online system that Warner was trying to use wasn’t working, largely because John’s elderly grandparents don’t use technology. No one could answer his questions as to the whereabouts of his beloved grandparents. Many shelters refused to show the flyer, citing safety issues for people who had a protective order in place.

Warner wasn’t deterred. Desperate and terrified, he decided to handle it himself. For three days, he patiently drove through cities and California forests searching every shelter he came across. He handed out flyers with a photo of his grandparents at a wedding and spoke to anyone who would take the time to talk to him. 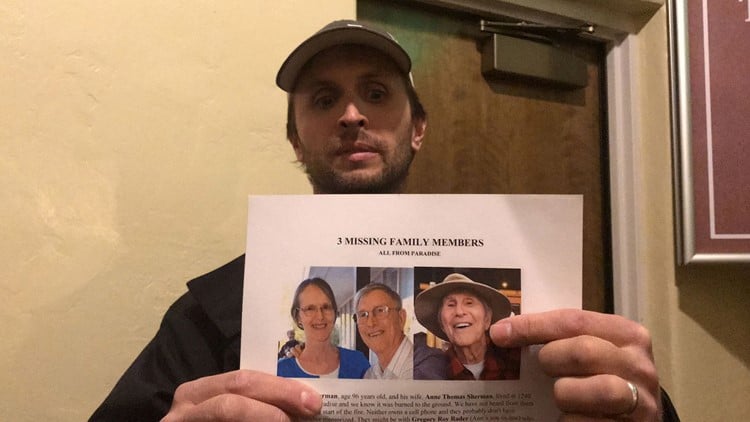 At one point, Warner pushed through a crowd to reach the Butte County Sheriff, thrusting one of his flyers into the hands of an exhausted Sheriff Kory Honea.

“I’m looking for my grandparents,” Warner said, his voice trembling, his eyes red. “I know you’re doing everything you can. But you need to do more.” (CBS 8)

He begged the media to help him by sharing his story. He was so desperate that he even shared his phone number with the public via a call with CBS.

“I just hope that somehow they’re watching or somebody’s watching that has seen them.”

It worked. He began to receive phone calls and one of the callers was a shelter worker who had seen the interview. She had information on Warner’s grandparents. They were safe.

It was past 10:00 p.m., but John jumped into his vehicle and headed to the shelter. He started calling for his grandfather. “Grandpa, oh, grandpa!”

And then he saw them, standing near a cot, his grandfather wearing a blue cap that said “veteran” on it.

The story that came together was a breathtaking one. Fay can barely see anymore and though they knew it was risky, they also knew their old barely running orange truck was their only chance.

Anne, who couldn’t drive because she’s ailing and doesn’t know how to use a stick shift, served as Fay’s eyes as they drove out of the fire at 15 miles per hour. It took them five hours to get out.

The brave elderly couple spent the night sleeping in their truck in an IHOP parking lot before going to the church shelter the next day.

A relieved John was not surprised. He knew his grandfather would never give up.

“The old guy got in his truck and got them out of there,” he said. “I love you, Grandpa.”