Deputy Knocks On Door As Flood Waters Rise, Then Realizes 3 Kids Are Trapped Inside 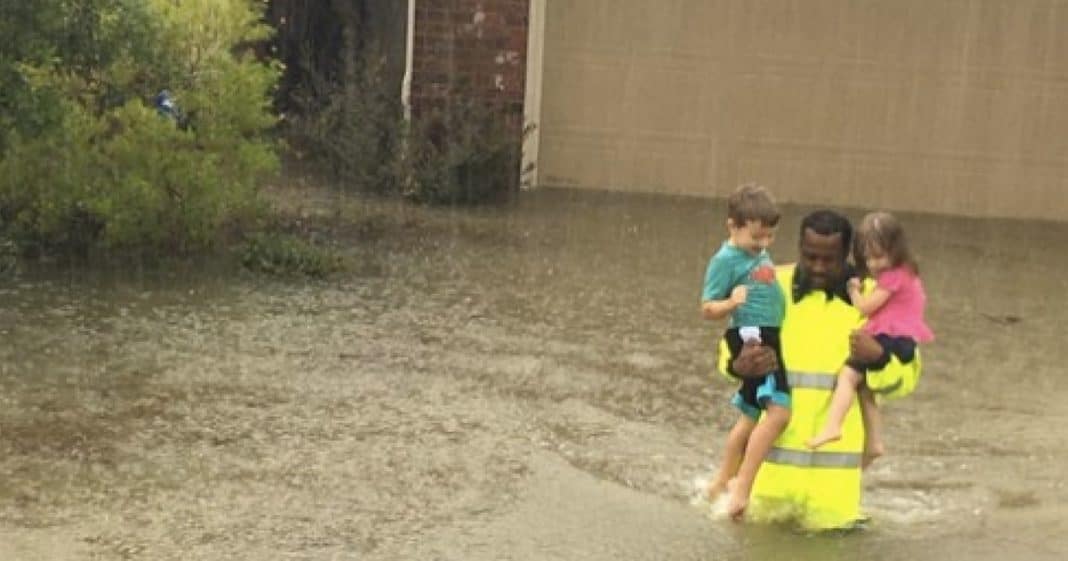 “Hurricane” Harvey may have been downgraded to a tropical storm, but its impact and devastation are at unprecedented highs. More than 30 inches of rain have fallen in the past four days, bringing almost unfathomable flooding that has driven hundreds of thousands from their homes and already taken the lives of 10 people.

Our hearts break for the citizens of Houston, Texas, and the surrounding areas as they now struggle to survive and then have to put back the pieces of their lives. But, as with any tragic story like this one, we at So Share This try to look for the good – the silver lining in the midst of the darkness.

As the beloved Mister (Fred) Rogers once said, “When I was a boy and I would see scary things in the news, my mother would say to me, ‘Look for the helpers. You will always find people who are helping.'” And boy are people stepping up to help!

One such helper is Sheriff’s Deputy Rick Johnson. As the flood water rose around the area, he and his colleagues started going door-to-door in Cypress, Texas, to check and see if anyone was still there and if they might need help.

At one of the first homes Johnson knocked on, he found a frightened family with two young children, a baby, and a dog. He told the parents to quickly grab the important items they would need – like money and IDs – and then, without wasting a second, grabbed the two older children and told their parents he would help get them to safety.

As he waded through the rising flood water, Johnson, who colleagues call “Deputy J,” did the best he could to stay the children’s fears.

“I grabbed the kids, and in order to keep the kids focused on happy thoughts given the seriousness of what was going on around us, I told them a couple of light jokes,” he said. “We joked about swimming, and the water being cold.”

One of Johnson’s colleagues noticed the deputy carrying the two children through the water and quickly snapped a picture. The photo has quickly gone viral, representing for many the spirit of those who are working tirelessly to help their neighbors in the midst of this devastating flood.

Thankfully, Johnson was able to get the kids to a rescue vehicle. Their parents, along with the baby and dog, made it on as well. By the time the vehicle reached the shelter, Johnson estimates it was carrying about 15 to 20 people and two dogs!

It wasn’t until later that Johnson realized the photo had been taken – let alone gone viral. By that time thousands of people were hailing him a hero, but Johnson downplays all the praise.

“I’ve always liked helping people out,” said the veteran, who joined law enforcement after serving in both Iraq and Kuwait.

The flood has derailed plans for the father of four, who was supposed to be taking his 20-year-old stepdaughter to school in Corpus Christi. For now, he is focused on helping wherever he can.

This is the third time Johnson has dealt with such an event in the area and, while he says this isn’t the worst he’s seen, he noted that, “the way this is going, if the rain don’t let up, it really could be a historic event.”

Do you agree that Deputy J is a hero? So share this!