Deputy Helps Mom Deliver Baby On Side Of Road. What Mom Does Next Is Going Viral 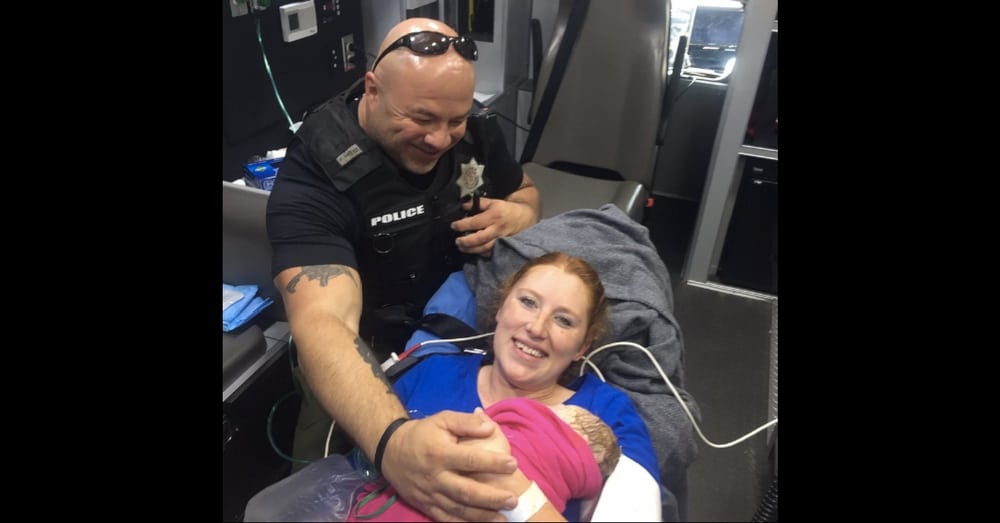 When Caleb and Destiny went to the hospital to have their baby, they were turned away.

“They told me I wasn’t in active labor, and that they didn’t even think she was coming this week,” Destiny said. “They asked how bad the pain was on a scale from 1 to 10 … I told them it was an 8. They said to come back when it was an 11.”

The couple headed back home, but Destiny’s motherly instincts told her the baby was coming soon. “My body was saying, ‘Hey, she’s about to come right now,’” she recalled. So the Caleb started speeding back toward the hospital.

When Deputy Constable Mark Diebold saw their Jeep flying down the highway, he put on his lights and pulled them over. When he caught up with them Caleb explained their situation, and Deputy Diebold turned on his lights and siren to escort the couple the rest of the way.

But that baby just couldn’t wait! “Caleb was shouting, ‘We’re gonna get you to the hospital, and we’re gonna have this baby!’” Destiny recalled. “I said, ‘Ha! Pull over.’”

Caleb pulled over to the side of the road and, when Diebold saw that, he pulled over too, thinking the couple might need some help. “[Caleb] started screaming for me and I ran to the passenger side,” Diebold said.

He got there just in time to help bring baby Evelyn Joy Debora Hall into the world. “There were no complications. He caught the baby, I cleared the airway and she started crying,” Diebold explained. “I wrapped her in a blanket and put her on mom. It was an awesome experience.”

What Deputy Diebold did to help the Halls that night really touched them, and they have since been to lunch with him and met his family. “It blew me away of how much this meant to him and his family,” Destiny said. “They were in tears.”

Caleb and Destiny wanted to honor Diebold’s service in a special way, so they contacted photographer Cyndi Williams to help them with a special project. Cyndi took a series of pictures of little Evelyn with Diebold’s uniform and badge.

The unique photos have meant a lot to everyone involved in the process. Williams did the photo shoot for free, saying that, with “all the negative stuff that’s out there right now [about law enforcement], it was such a feel-good story for me because my own mother and sister are both police officers in Louisiana. I feel so honored to be even a tiny part of the journey with this wonderful family.”

As for Deputy Diebold, the sweet pictures serve as a visual reminder of why he does the work he does. When asked about the photo shoot he said, “It was amazing. It was heartfelt and it was a big deal. That photo shoot reminded me that [police work] is what I need to keep doing until it’s my time to stop.”

Did you love seeing these sweet photos? So share this today!