Dog’s Best Friend: Cop Comforts Wounded Dog When She Needs It Most 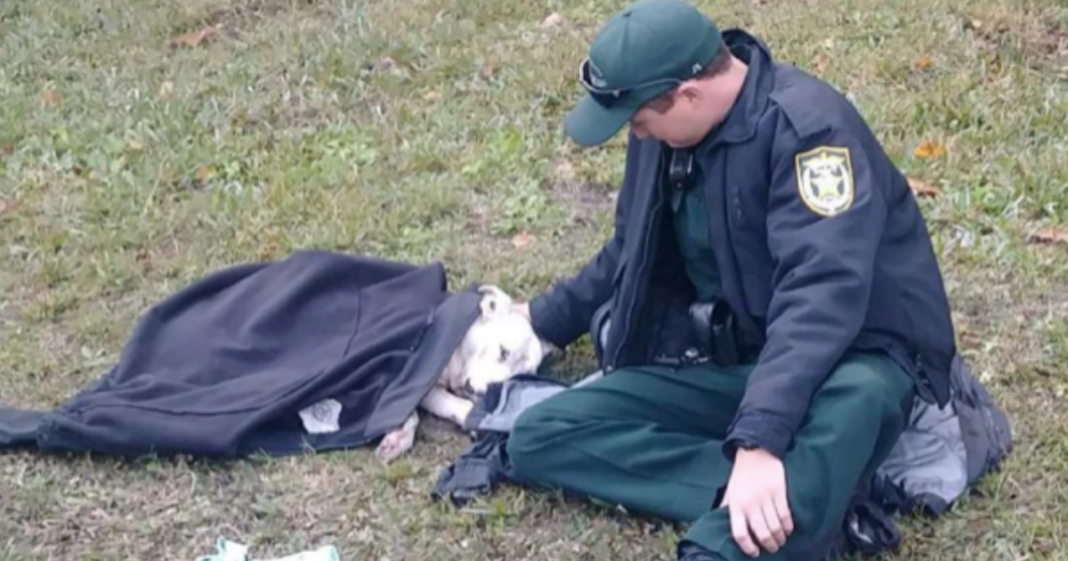 A man was walking his dog down Royal Palm Drive in Kissimmee, Florida on Sunday morning when he came across an unexpected scene. Sitting by the road, a deputy had taken his coat and wrapped it around a dog laying on the ground. The dog had been hit by a car, and the officer showed her compassion as he waited for help to arrive.

The officer’s kindness so moved Carlos Irizzary that he took a picture and shared it on Facebook. He remarked that it was “something that you don’t see every day.” The officer had no idea someone was looking as he comforted the dog.

“This is my morning, an Osceola County Sheriff helping a Dog that was hit by a car.”

Irizzary noted that the person who hit the dog stayed until the police arrived on the scene.

“Thank you, Deputy Fiorelli, for serving with care and compassion.”

Deputy Fiorelli cares for an injured dog who was hit by a car and waits with him until animal control arrives. Thank you…

“It never hurts a human to be kind to an animal. Well done.”

“My congratulations to Officer Fiorelli for demonstrating his GREAT HUMANITY … God bless you !! …….???“

Deputy Josh Fiorelli later told WFTV that the dog was sweet and accepted his help although she was in pain due to a dislocated leg and scratches.

“I know a lot of dogs become defensive when they get hurt. She was not defensive at all. She was acceptive of me trying to pet her and take care of her,” Fiorelli said.

The deputy explained that he had acted because he knew the dog needed someone in her time of need.

“It was cold out. She was wet,” Fiorelli said.

“She didn’t have anyone there, so I decided to be that person.”

The dog was taken to Osceola County Animal Shelter. She had no collar or microchip and was expected to have surgery on Thursday if her family didn’t claim her. She was treated with pain medication while she waited and is expected to be OK.

“She’s scraped up and can’t move much, but sometimes she can wag her tail.”

Depurty Fiorelli said that he hoped the story would be a reminder for everyone who takes care of a pet.

“Keep an eye on them. They may only be a part of your life, but you’re their whole life,” he said.

This is one guy who deserves a big thank you for going the extra mile to show kindness and compassion.

Love this! Hate that the dog was hit by a car…but the presence of mind by this Florida sheriff's deputy to put his coat on the dog to give it a sense of security… is tremendous. Well done Osceola County Sheriff's Office! https://t.co/82u33AhUFt