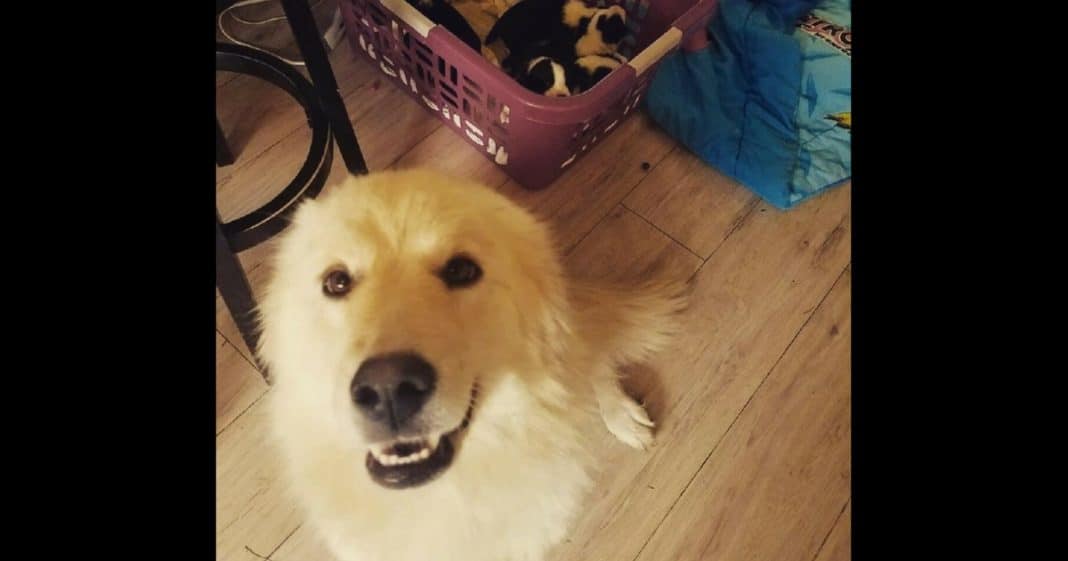 It was like being in the middle of a nightmare you can’t wake up from. On February 20, 2017, Jessica Woodruff watched as her barn in Rosenberg, Oregon, burned to the ground.

Inside were four goats, a pig, and her dog Daisy’s three-week old litter of puppies.

Jessica had tried sprinting to the barn to get the animals out as soon as she saw the flames, but it was too late. There was nothing she could do.

She had to hold Daisy, a Great Pyrenees and Border Collie mix, back as the desperate mom tried to run into the barn to save her babies.

“It all happened within minutes,” she added. “It’s horrible.”

In the days that followed, Daisy wandered aimlessly around the farm, unsure of what to do with herself now that her seven puppies were gone. She refused to eat and would walk into the charred remains of the barn, sit down by the door, and whine.

“Daisy wondered the 80+ acres lost, sad and confused,” she said. “As a mother, I couldn’t fathom her loss.”

She wanted to do whatever she could to help Daisy, so she reached out to her local community to see if there were any puppies in need of a foster home. That was when she met Lorna Murphy.

Lorna’s five-year-old Border Collie Chloe had died while giving birth to her litter of eight puppies. Lorna had been bottle-feeding the puppies, but the round the clock feedings had become exhausting.

Jessica and Lorna decided to see if Daisy would take on the foster puppies, even though they weren’t her own.

Within seconds it was clear – it was a match made in heaven.

“Daisy was in heaven!” Jessica said. “It was so amazing to see the change. She had purpose again. She laid down to feed them, cleaned them, and even protects them.”

After a week of being together, Daisy and the puppies have formed an incredible bond. The puppies are being cared for, and Daisy has found healing and a renewed sense of purpose.

Now the puppies are almost ready to be weaned. A couple of the puppies will stay with Daisy while the others will return home with Lorna.

Jessica and her family are so thankful that Daisy was given another chance to be a mom and was able to find healing in the process.

“Without a doubt, these foster pups have helped her,” Jessica said. “We have our Daisy dog back.”

Were you touched to see how Daisy and these puppies were able to find a new life together? So share this!