Deaf Baby Gets Hearing Aids. Watch What Happens When He Hears Mom’s Voice For 1st Time… 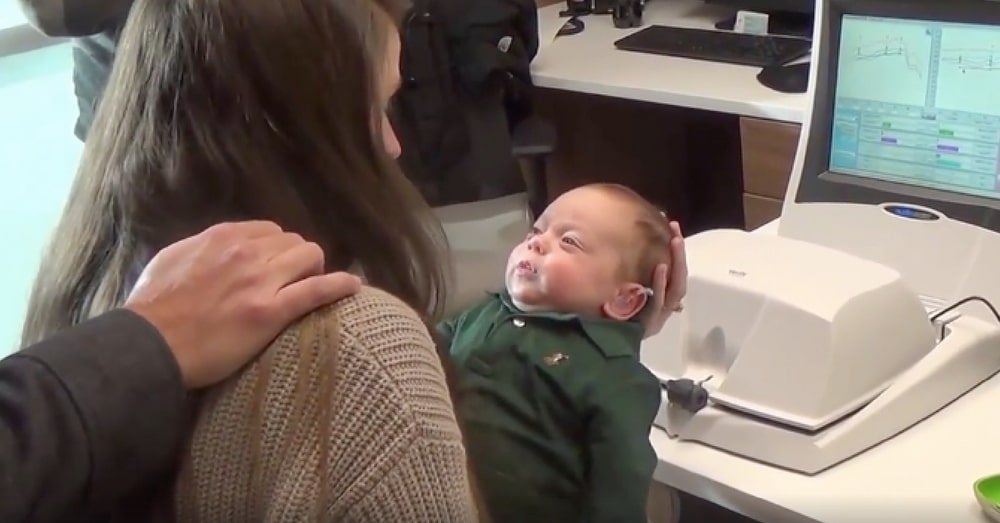 Taryn and Drew Ruiz were so excited when their son Archer was born, but soon after they noticed something was wrong.

At three weeks old doctors discovered that Archer had permanent moderate-severe hearing loss in both ears.

Wanting to do what they could to help their son, his parents decided to get him fitted with hearing aids to help correct the impairment.

Finally, after two months, the hearing aids were ready and Taryn and Drew took Archer to get them fitted.

Archer was not happy when they were putting the hearing aids in and cried in his mother’s arms, but as soon as the devices were turned on his whole demeanor changed.

At first he looked a little confused. He face showed that he was trying to take in all the sounds around him and figure out was was going on.

After the initial shock, though, he did something that brought tears to both of his parents’ eyes. Click below to watch his reaction for yourself!

Taryn and Drew couldn’t hold back their happy tears and excitement as a big grin spread across their son’s face! Their words of love and encouragement were the first sounds he ever heard, and we know he’ll be hearing them for the rest of his life from his loving and supportive parents!

Now Archer is used to the hearing aids and is excited to have them put on each day. His parents say he gives them a big smile every morning when they turn them on!

Did you love watching Archer’s sweet reaction to his mother’s voice as much as we did? So share this!