Darci’s Puppets Fight Over Who Will Sing At Finale. Their Duet Has Audience Roaring 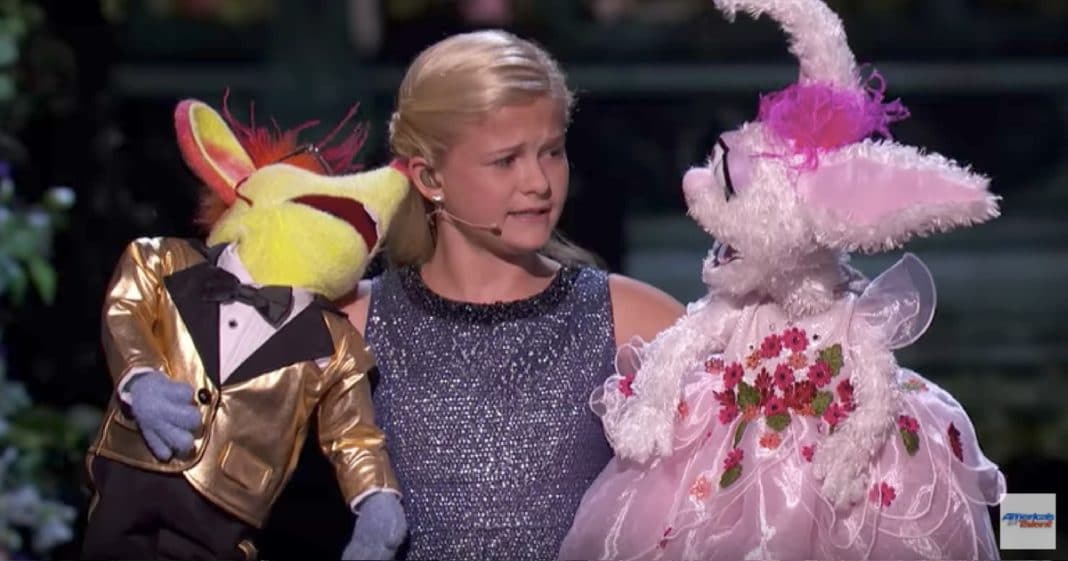 Darci Lynne Farmer made her debut on America’s Got Talent less than four months ago, but in that time she has already worked her way into our hearts with her incredible ventriloquist acts. She may only be 12 years old, but she has the prowess and the star quality of a seasoned professional!

When she auditioned, Darci told the judges she had taken up ventriloquism to help her get over her intense shyness. Well, it seems to have worked! Darci looks at home on the stage as she delights audiences with her funny and impressive performances!

This week is the show’s finale, so Darci brought her A game with not one, but two puppets. Both Petunia the rabbit, who helped Darci win the Golden Buzzer during the audition stage, and Oscar the mouse, who declared his love for Mel B during the live rounds, returned to the stage to help Darci bring it home.

It’s amazing to watch Darci have a conversation with both of her puppets! How she is able to switch back and forth between the puppets and herself and keep everything straight is beyond me! It’s clear this girl has found her calling!

Oscar and Petunia argued back and forth for a little while over who should get to perform for the finale. Eventually, they decided to sing a duet. Their performance of The Beatles’ “With A Little Help From My Friend” had the judges and audience on their feet applauding, and it’s not hard to see why. Once you watch this, you’ll be cheering for this incredibly talented young lady too!

It remains to be seen who will win this season, but Darci is a clear fan and judge favorite. The judges couldn’t stop gushing over her after she had finished her performance.

“You are just, you’re so poised, and I still don’t know how you do it ‘cause I try and watch for your mouth moving and you are that professional,” she continued. “You’re amazing. Oh my god, I’m running out of breath. You’re amazing, absolutely amazing.”

“You are amazing and it has been amazing watching you all season,” Heidi Klum agreed, “and you just have that special something that not everyone has, and you might have just won yourself $1 million right there.”

Even the famous curmudgeon Simon Cowell had only nice things to say:

“Look, we are being very complimentary tonight, but for all the right reasons,” he said. “because America has got it right, we’ve got the right 10 people here. Everyone has raised their game. This is what I think about you, Darci, when you can appeal to all ages with what you’ve done.

“But this is what I believe: the best part of doing this job is when you are there and you can say, ‘I was there at the beginning of someone’s career and I witnessed a star.’ Tonight, again, I’ve just witnessed a star emerge because that’s what you are. You are special, incredible, funny, talented. I think you’re gonna win.”

Do you want to see Darci win America’s Got Talent? So share this!