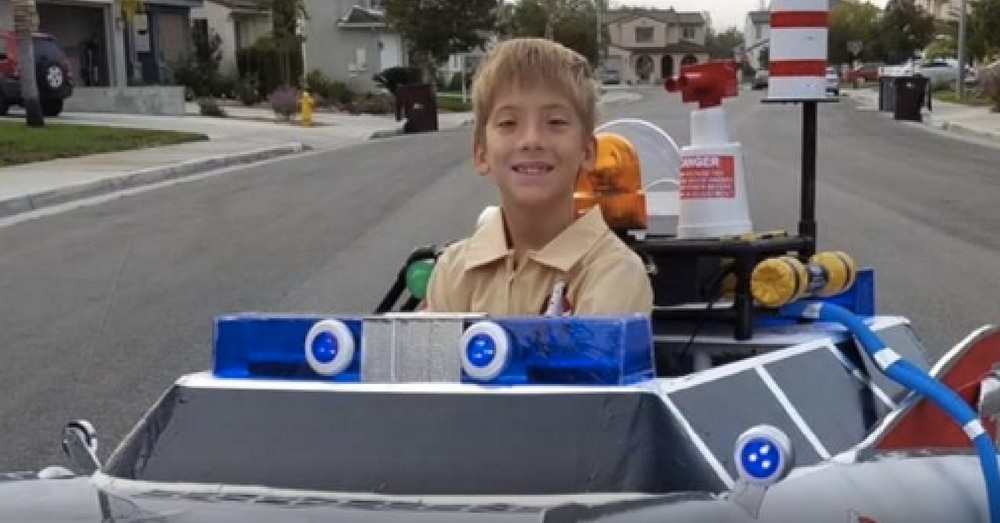 Every year, Jeremy Miller’s dad makes him the coolest Halloween costume ever.

This year may be the best yet.

The 8-year-old California third-grader is driving around in a “Ghostbusters” Ecto-1 vehicle, propelled by his wheelchair and featuring all the expected bells and whistles — even a working siren.

Last year, his dad built him a “Star Wars” snow speeder that even got a mention on Twitter from Luke Skywalker himself, actor Mark Hamill.

Ryan Miller builds each year’s costume around his son’s wheelchair or, before he had one, whatever apparatus he was using. The idea started when Jeremy had hip surgery as a toddler and had to wear a “hip spica” cast that immobilized most of the boy’s legs.

“We specifically asked to make them red so we could turn them into Lightning McQueen,” Miller told TODAY.

The following year, Jeremy was using a walker, which got turned into the Batmobile.

Snowspeeder from Empire Strikes Back (2015)

His neighbors kept up the pressure.

Jeremy was born with spina bifida, a birth defect in which the baby’s spinal cord fails to develop properly, and he has had numerous surgeries since he was born. He plays wheelchair basketball, rugby and soccer. He rides the ramps at the local skate park and also has tried his hand at surfing.

Miller, who works in IT for an auto dealership, says the Halloween costumes he creates every year allow his son to be the center of attention in a way that draws positive attention to the wheelchair.

“When he’s out at school and things like that, he has his friends, but sometimes they run and they just leave him behind,” he said. “Part of the reason we do this is because people come to him, so he’s the center of attention, and he loves it.”

Read about how the whole costume came together at TODAY.