Dad Thinks He’s Coming For Career Day, But Watch What Happens When His Son Joins Him… 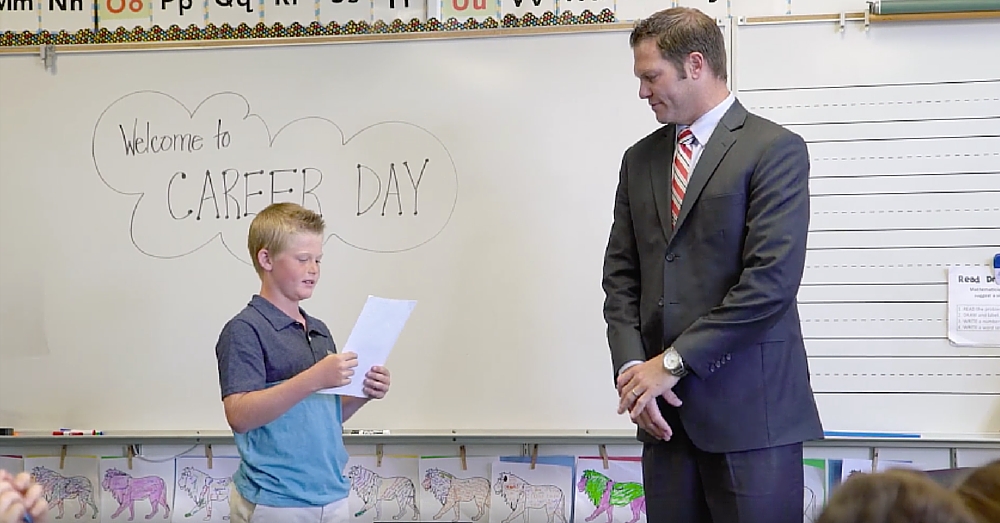 While much attention is given to the bond between mother and child and the impact moms have on their children’s lives, the role of a father is just as important in the healthy development of a child.

Sometimes it seems like fathers get forgotten, but Kleenex wanted to make sure that dads know just how important they are to their kids.

In a commercial called “My Dad My Hero” that will make you reach for your box of Kleenex, they brought some dads to their kids’ classroom for Career Day. Each of the dads got up and spoke to the kids about their jobs.

When they were finished, though, the real reason they were asked to come into the class was made clear. Each of their kids got up and told them why they loved them and why they were so special and important to them.

“He always plays games with me and loves to watch sports,” said one little boy.

“He inspires me to do anything,” said another girl in the class.

One boy, who spoke about how special he felt because his dad had chosen to adopt him, said his dad “always teaches me a lot, like how to take care of myself and how to be a mighty good man.”

Some of the kids told stories about things their dads had done that made an impact on them. One little boy, whose dad is a police officer, told his class about a time that his dad had to work on Christmas Eve, but still stayed awake with them until they had opened all of their presents.

His dad had tears in his eyes as the boy recounted that Christmas. Oftentimes things that get forgotten or that don’t seem like a big deal make a huge impact on kids, and it was touching for this father to realize what an impact he had made on his son.

That Career Day was one these fathers will never forget. “Any time your son calls you his hero is pretty special,” said one dad.

Another added, “The job of being a dad is the best job I could possibly do.”

Do you know a good dad? So share this!