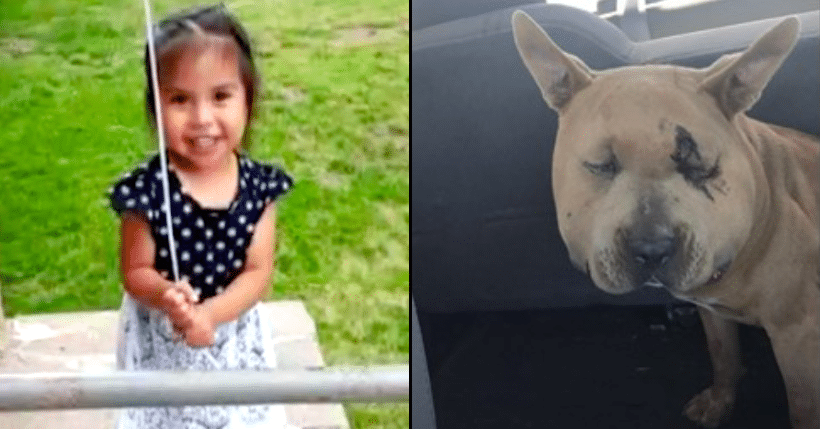 Rodney Bacon lives near the Idaho and Nevada state line with his family in Owyhee County, a land covered with sagebrush and prairie grass. The land is the perfect habitat for rattlesnakes.

One evening, Rodney, his 3-year-old daughter, Harper, and their German shepherd named Trek went to get mail out of his SUV. All of a sudden, Trek started pushing Harper away from the vehicle.

This behavior was out of character for Trek and at first Rodney was confused about why he was doing it. Soon, though, he would learn the scary truth.

Unbeknownst to Rodney and his daughter at the time, a coiled rattlesnake was hidden in the shade by the car. Trek was trying to keep Harper away from the snake.

Rodney and Harper went back inside, still unaware of the rattlesnake. At that moment, pit bull Gracie, the family’s other dog, joined Trek.

“As soon as I closed the door the other dog starts barking at it,” Rodney said. “And that’s when she was going after it, and the closer I got to the snake, the more aggressive she got. She ended up killing the snake by the time I got the shovel.”

Gracie, obviously gifted with natural God-given abilities and on a mission to protect her family, did exactly what needed to be done in a split second without thinking about protecting herself.

Unfortunately, the heroic dog was bit in the process and took off running.

“I thought she ran off to die,” Rodney said. The family searched for Gracie, but couldn’t find her.

The next day, though, as Rodney came home for lunch, he found the pit bull waiting for him.

“The following day I came back at lunchtime and there was another rattlesnake there and she was sitting there and she killed that one too,” Rodney explained. “And she had another bite on her leg. At that point I tied her up and I was like, ‘I’m taking you to the vet right now.'”

Thankfully, aside from having a “really big swollen head,” Gracie is doing just fine. “She can breathe, eat, drink, and she’s wagging her tail as happy as ever,” Rodney reported.

One can only imagine how this story could have ended without Gracie saving the day. Thankfully, both she and Trek were watching out for their family and this story has a happy ending.

Do you agree Trek and Gracie are heroes? So share this!