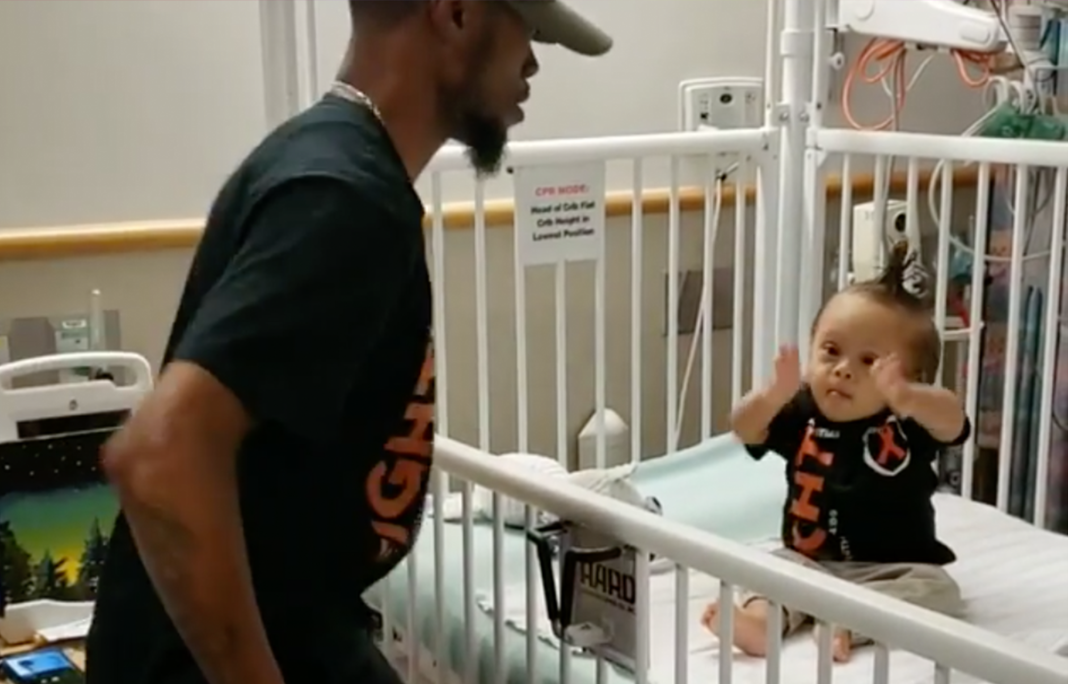 It’s got to be a contender for one of the cutest dance videos this year. Kenny Thomas of Merchantville, New Jersey, east of Philadelphia, shared a video as he busts a move for his 1-year old boy Kristian in the hospital. (See the video below)

He was celebrating the fact that his son was doing well after his first round of chemotherapy. Kristian was born with Down Syndrome and a blood disorder, and then he was diagnosed with leukemia last month.

His dad dances for him to lift his spirits, accompanied by a new tune by Ciara called “Level Up.”

Ciara launched the “Level Up Challenge” on social media to promote the tune, asking for fans to post videos showcasing their dance moves.

The song name is really fitting, as Kristian is fighting to get his blood platelet levels up. However, there is no indication in the video that the boy is ill. Instead, he is transfixed by the smooth moves of Dad, smiling, cooing, and laughing as he moves to the music himself.

The video currently has 2,757,584 views on Instagram. Ciara saw Kenny’s video and posted it herself with the caption:

“My heart can’t take it watching this proud Father @KennyClutch_ dancing doing the #LevelUpChallenge because his baby’s numbers were up.”

Then, she announced that Kenny won the Level Up challenge!

@ciara Came through @leveldancecomplex and Presented our family as the winners of the #levelupchallenge and to blessed us with love, prayer and motivation to get through the next round!! #fightkristian #fightcancer #fightleukemia #LEVELUP ????????? Thank you so much @ciara You are amazing!! Praises to the Most High!! PHOTOS BY @relltheremedy

The video truly showcases the healing power of music and is just adorable.

“Music is therapeutic for him and he’s always calm when music is on and when someone is dancing,” said Thomas.

“He’s always in the studio with me and is always seeing me dance. He is a bundle of joy and ball of fire who is truly inspiring.”

When you wake up to your sons number LEVELS UP!! And we get to go home for a few days as he is killing CANCER!! ?? TAG @ciara this song right on time #GODSPLAN #fightkristian #fightcancer #FIGHTLEUKEMIA ?????? #locking #dance #love #son #fatherandson #levelupchallenge

Yesterday, Kenny made a happy announcement that Kristian is in remission. This time, he and his son, one of four kids, danced to LL Cool J’s “Mama Said Knock You Out.”

“We are 1 step closer to being fully healthy and healed!! Thank you all for the continued prayers..Let’s knock this Cancer Out!!”

My wife @josilynethomasphotography and I are happy to announce that Kristian is now in REMISSION!! ?????? We are 1 step closer to being fully healthy and healed!! Thank you all for the continued prayers..Let's knock this Cancer Out!! TAG @llcoolj ??#fightkristian #fightcancer #fightleukemia #LEVELUP

See more from CBS News below: