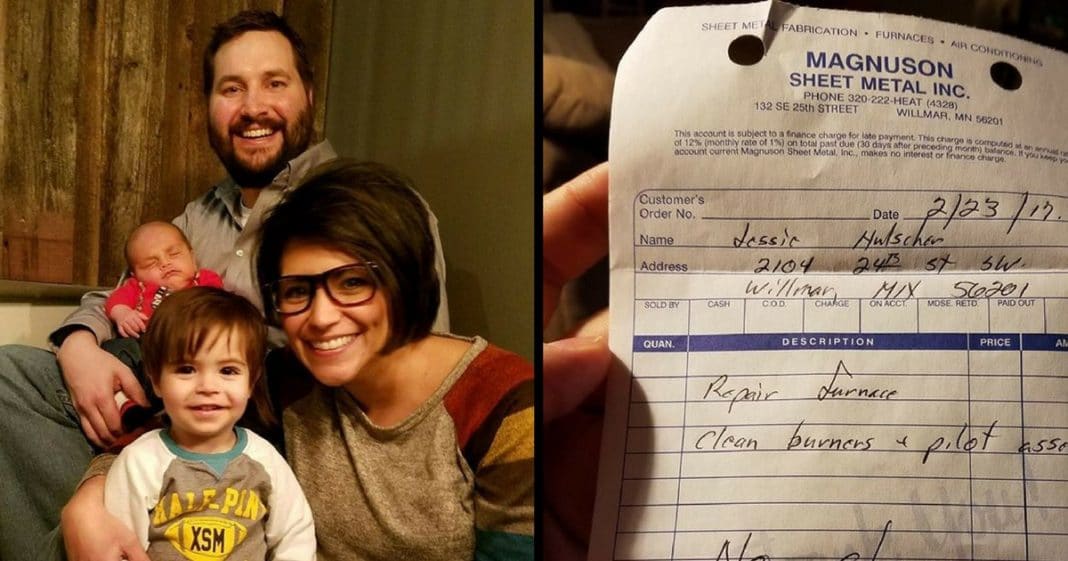 Having a baby is stressful enough on its own, but when you add something else to the mix things can get overwhelming.

That’s what Jesse Hulscher discovered the day after his son, Adler, was born.

Jesse had run home to pick up his 2-year-old son before going back to his wife, Maria, but while he was there the blower fan in their furnace suddenly stopped working.

Jesse began to panic. He knew his newborn son would need to have a warm house to come home to.

“Instantly I panicked,” he said. “I have a two-year-old here, a newborn coming home in a couple days and this was before the big potential snow storm.”

He grabbed the phone and called Magnuson Sheet Metal to see if they could fix the furnace before he brought his wife and baby home. Within 20 minutes there was someone at his door.

“He said, ‘The fan’s not working, the furnace isn’t working, my wife is in the hospital, we just had a baby yesterday,’” Magnuson Sheet Metal co-owner Craig Aurand recalled. “I just said, ‘Take it easy, we’ll be right there.’”

Thankfully they were able to fix the problem quickly and the house was nice and toasty by the time Maria and Adler got home.

Jesse was already blown away by the incredible service he had received, but when he got the bill later he was shocked.

“I opened it up and looked at the receipt and it said, ‘No charge, take care of the new baby,’” Jesse said.

It turns out this isn’t the first time Magnuson Sheet Metal has done something like this, either. Craig says they have a history of not charging families in need or for small jobs that take place on holidays.

“We didn’t do it for the PR, we just did it to be good people,” he said. “That’s it. Just to be nice to these people. That’s what this is about.”

Were you touched by what this company did for Jesse and his family? So share this!