Dad Asks Hard-Working Son If He Can Do 1 More Chore. When He Sees What It Is He Breaks Down In Tears 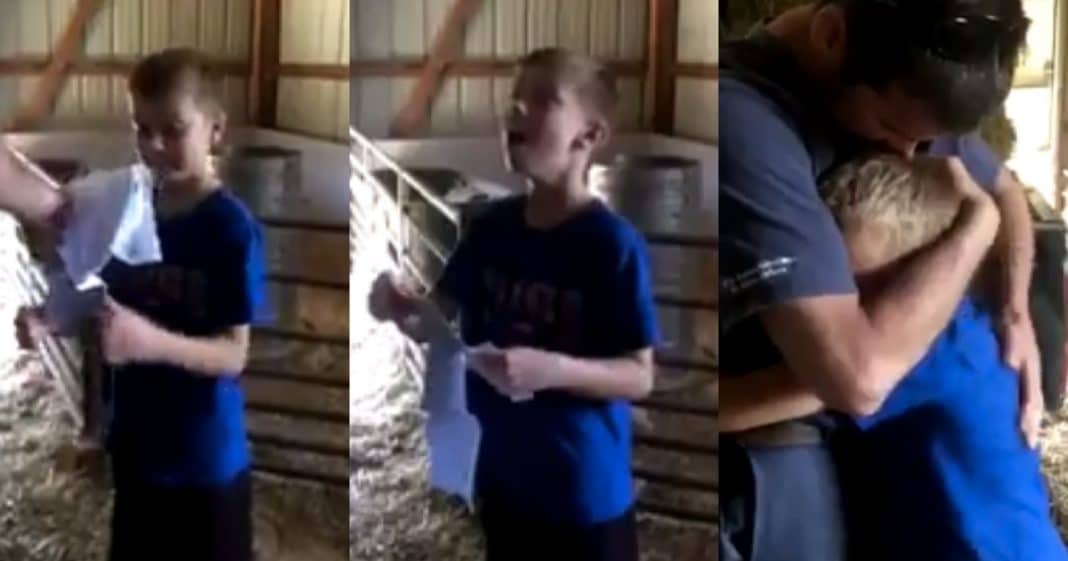 A good work ethic is something that is oft-lamented these days. While hard work and determination have been the backbone of this country for years, many children have grown soft and don’t know the feeling of a hard day’s work.

Just because a lot of kids are that way, though, doesn’t mean all of them are.

Nine-year-old Kolt Kyler from Pierceton, Indiana, knows the meaning of hard work. He helps his dad on the family farm, and that often includes chores like feeding and cleaning up after their pigs.

While many boys his age might scoff at such hard and dirty work, Kolt works tirelessly and without complaint.

After one particularly arduous day on the farm, Kolt’s dad, Andy, had a proposition for him.

“You know, I kind of tested you a little bit today,” Andy told him. “I wanted to see how you’d react because I knew you were tired. You never once complained. You worked hard.”

He then asked if Kolt would be up for one more job. He warned his son that it would take a lot of time – probably all day – but the hard-working young man agreed to the task before he even knew what it was.

That’s when Andy handed him an envelope and told him to open it. When Kolt saw what was inside he immediately melted into tears.

Instead of another chore, the envelope contained tickets to go see Kolt’s beloved Chicago Cubs play at Wrigley Field, a reward for working hard on the farm, at school, and on his baseball team.

“He may or may not be their biggest fan!” Hannah said, adding that Kolt has “been carrying around a bat, ball, and glove since he could walk.”

Hannah posted a video of the sweet moment on Twitter where it immediately caught fire, spreading as far as the Cubs themselves.

Anthony Rizzo, the Cubs’ first baseman, retweeted the video and said he would have batting practice passes waiting for Kolt so he could experience the game from right on the field!

The whole team will give Kolt and his father a warm welcome at their game against the St. Louis Cardinals in June, and we’re sure Kolt is eagerly counting down the days!

What a fitting reward for such an exceptional young man!

Were you touched to see Kolt’s reaction to his dad’s big surprise? So share this!