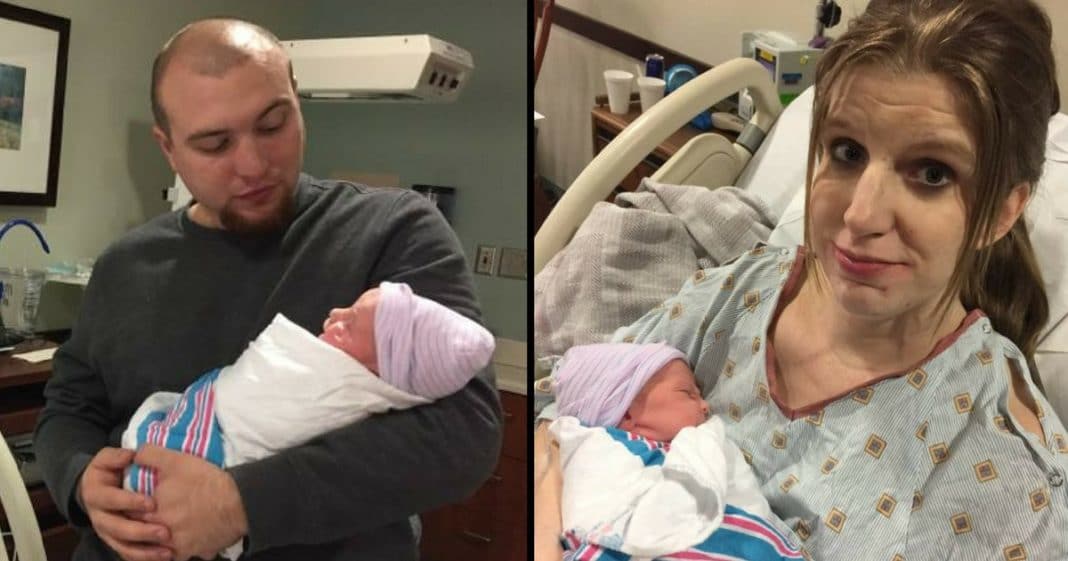 What started out as one of the best moments of Jean Luc Montou’s life quickly turned into one of the worst when his partner, Sarah Bertrand, died just 24 hours after giving birth to their son, Julian Charles.

At first, everything seemed to be going according to plan.

“Afterward, she just silently dropped tears of joy and happiness,” Jean Luc said. “She loved Julian so much.”

But shortly afterward, Sarah began complaining of a headache and then appeared to have a seizure.

The hospital is still investigating the cause of her death, but they believe she suffered an amniotic embolism, an extremely rare childbirth complication that causes the heart and lungs to collapse as well as internal bleeding.

“Once the symptoms start showing, it’s already begun,” Jean Luc said. “I remember thinking it would be OK because we were in a hospital — and the staff tried so hard to help her — but I knew it was serious when they started doing compressions and began using the defibrillator.”

The couple had been waiting to announce Julian’s birth on social media, which left Jean Luc with the heartbreaking task of announcing both the birth and Sarah’s passing in the same post.

“Sarah didn’t make it,” he wrote in the now-viral post. “My last 24 hours with her was the happiest I’d ever been…I loved this woman like no other and she died in front of me while I held our son. Please take a few moments to remember this woman because she was the absolute best thing that has ever happened to me and Jane (Jean Luc’s 3-year-old daughter from a previous relationship).”

Sarah had loved Jean Luc and Jane deeply and had even left her job as a veterinary technician so she could stay at home with Jane while her dad worked.

The couple had planned to marry after Sarah recovered from the birth. Now Jean Luc says Jane and Julian are the two things holding his life together as he tries to figure out where to go from here. (A GoFundMe has been started to help the family get back on their feet.)

Whatever happens next, Jean Luc says his son will grow up knowing just how much his mother loved him and wanted to be in his life.

“We had both wanted a son so bad,” he said. “She worked hard during delivery and was excited to see Julian finally. Just 20 minutes before she died, Sarah said, ‘I have never loved anyone or anything as much as I love him — he’s like my favorite thing ever.'”

“Julian was her purpose,” Jean Luc added. “I’ll tell him that he’s not just her son, he’s her legacy. I’ll tell him that his mom loved him so much, but that she needed a rest from this life … that she gave so much of herself to nearly everyone she knew and that it was her turn to relax.”

He said that when he initially posted about Sarah’s death he only intended it for those close to his family, but he has been overwhelmed to see how many people have since been touched by his words and reached out to offer their condolences. He’s happy to see that Sarah’s legacy will be kept alive.

“She deserved no less than for the world to pause for a moment and see how strong, brave and happy she was before her sacrifice,” he said. “I miss her so much, but sometimes I think it would be selfish to ask God to return her because she finally gets the peace and relaxation that she sought her entire life.

“I just wanted people to know who she was, and I don’t want her to disappear after everything she did for me, my daughter and Julian.”

Were you touched by this story? So share this Today!