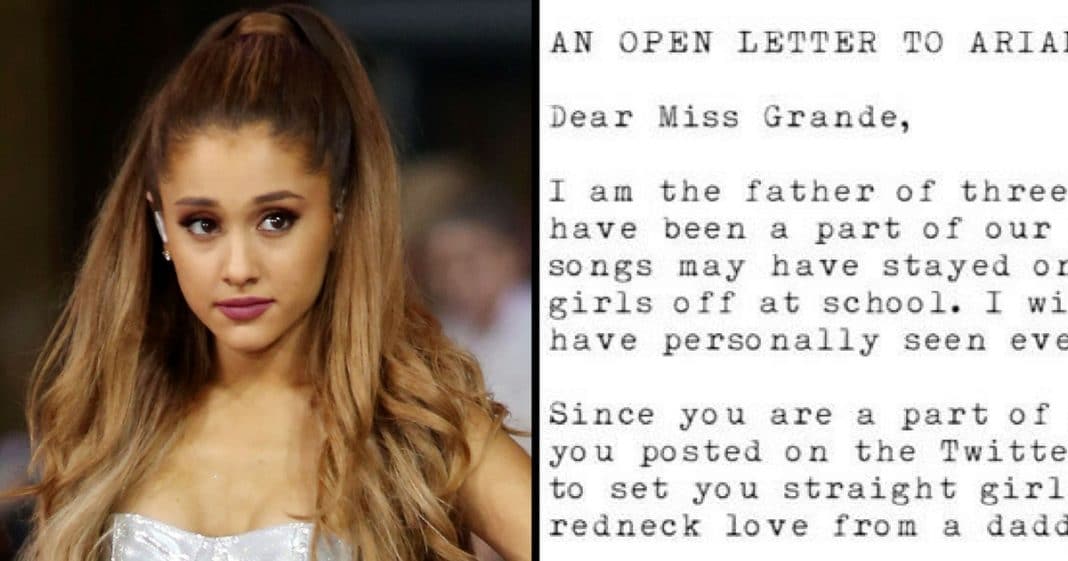 The act of terrorism that took place in Machester earlier this week left many people shaken, not least of whom Ariana Grande, the singer whose concert the victims were leaving at the time of the attack.

Sources say the singer has been “absolutely crushed” by what happened and that she has barely slept since the attack.

Shortly after the bombing, Grande posted on Twitter that she was sorry for what had happened.

broken.
from the bottom of my heart, i am so so sorry. i don’t have words.

But Patrick Millsaps, father of three young Ariana Grande fans, took issue with what she had to say and penned an open letter to the singer that is truly powerful.

I am the father of three daughters– ages 13, 12 & 12. So, you have been a part of our family for years. On occasion, your songs may have stayed on the radio AFTER I have dropped the girls off at school. I will neither confirm nor deny that I have personally seen every episode of ‘Sam & Kat.’

Since you are a part of our family and after reading a tweet you posted on the Twitter the other night; I’m afraid I need to set you straight girl. So listen up and receive some redneck love from a daddy of daughters.

#1. You don’t have a dadgum thing to apologize for.

If some [idiot] had gotten drunk and killed someone with his car next to your hotel in Manchester, would you feel responsible? If the night before your concert, a tornado had hit Manchester and tragically killed several people who were going to go to your concert; would you feel the need to apologize? You see, you are no more responsible for the actions of an insane coward who committed an evil act in your proximity than you would be for a devastating natural disaster or acts of morons near your hotel. Your text was some stinkin’ thinkin’ in that regard.

#2. In your line of work, you have so many experts who are now “strategizing” what you should do next (I used to be one of those “experts” when I managed talent). Tell them ALL to go take a powder, give them the month off, and tell them that if they call you within the next 30 days, they are fired!

These “experts” don’t have a freaking clue what you are processing right now. Spend time with your God, your family and you friends who will give you space and support when you need it.

Heck, go lick as many freaking donuts as you want. Girl, you deserve it!

#3. When and only when you are ready, on behalf of all dads who love your… um… whose daughter’s love your music, SING AGAIN.

Music is the international language of peace. Every time you open your mouth and share that incredible God-given gift to the world, you make this crappy world a little less crappy.

So there you go my dear, unsolicited advice from a fat dude in Georgia who loves his daughters and appreciate that there are people like you in the world. Take care of you first. Your fans aren’t going anywhere.

We know it’s going to take time to heal the wounds – physical, mental, and emotional – that were inflicted that night, but we hope Grande – and others – will take Millsaps’ words to heart as the healing process begins.

Do you agree with what Millsaps wrote? So share this today!