Customer Screams At Worker With Autism. Boss’ Response Is Taking Internet By Storm 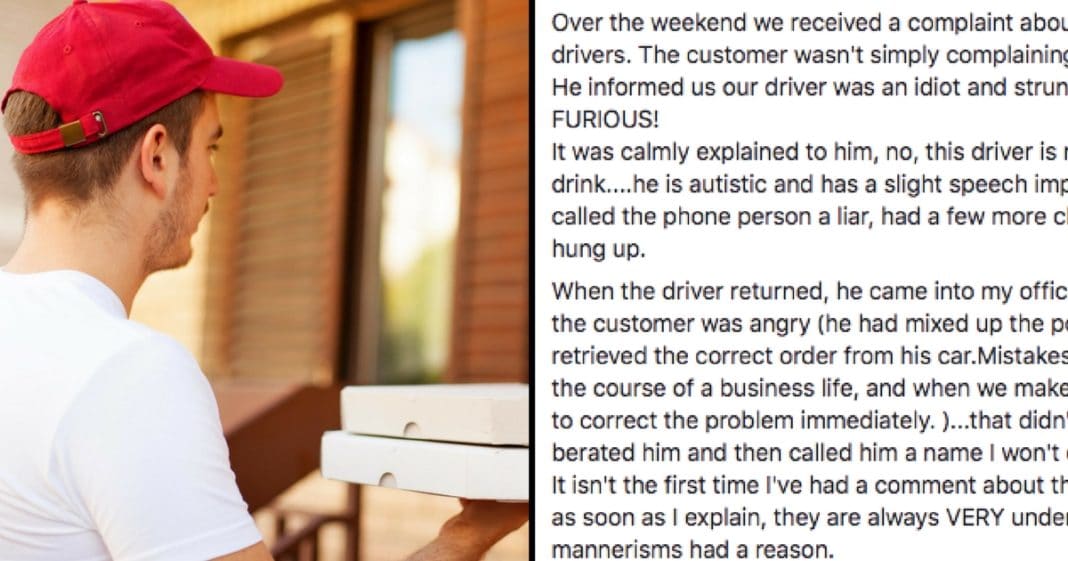 P.J. Gialopsos is the owner of Little Italy Restaurante in Anchorage, Alaska. If you’ve worked in the service industry, you know that every customer isn’t always satisfied. It’s par for the course, but sometimes people can take their complaints too far.

This was the case for one of P.J.’s employees who delivered an order to a patron. There was a problem with the order – the employee grabbed the wrong delivery order from the car and quickly got the right one once he realized his mistake – but rather than be understanding, the customer began insulting the delivery driver, who has autism.

The young man is human (like all of us) and prone to errors from time to time, but the customer continued to cuss and scream at him.

“So (the driver) is a little awkward socially,” P.J. said after the incident, “gee whiz — that doesn’t give you a right to call him a foul name and make his day miserable.”

In the past when customers have called the restaurant about this employee, matters were quickly resolved when P.J. explained that the employee has autism. Customers sympathized with the driver and were understanding; but not this client. They called the restaurant and even accused the driver of being on drugs while continuing to spew their tirade of profanity and insults.

Frustrated, P.J. took to Facebook and wrote a response to the customer’s rant that has gone viral. The golden rule for service work is: “The customer is always right.” Not this time. After summarizing the situation, P.J. did the most beautiful thing to support her employee.

“We have fired this customer,” she wrote, noting that their name, address, and phone number will be tagged as “DO NOT DELIVER DO NOT ACCEPT ORDER” in their system.

In the post P.J. also noted that her employee is an accomplished student with “an amazingly inquisitive personality, a wicked sense of humor and one helluva work ethic.”

We understand P.J.’s annoyance with this former customer’s ignorance. Just because you don’t have a clear understanding of a disorder doesn’t give you the right to react with such rudeness.

As for why she stood up to the customer, P.J. said, “The fact that he has autism doesn’t cross anyone’s mind at the restaurant. We just work, he just works, that’s it. Maybe it’s the mom in me, but I had to write that response.”

As P.J. finished her post she queried, “And won’t that customer be surprised later in life to learn that his ‘idiot strung out’ delivery driver long ago turned out to be the physicist, microbiologist or chemical engineer who could quite possibly make a discovery that will save his sorry *** someday.”

Very true. What if, in some ironic twist of fate, this former patron ends up needing this young man’s help? The 33,000 people who liked the post and 8,000 who shared it seemed to agree with how P.J. handled the situation.

According to P.J., her employee is “thrilled” with the response. The restaurant owner wrote in a follow-up post a few days later: “I can honestly say kindness is not in short supply. Understanding still thrives….and good people do good things every single day…all over the world.”

We’re glad this story had a positive ending, especially for the delivery driver! Sometimes, instead of giving into one person’s temper, you need to stand up to them and tell them they are wrong, just as P.J. did.

Do you support P.J.’s decision to stand up to this angry customer? So share this!