Cruel Owners Leave Pets Tied Up To Fend For Selves, But Brave Texans Refuse To Leave Them Behind 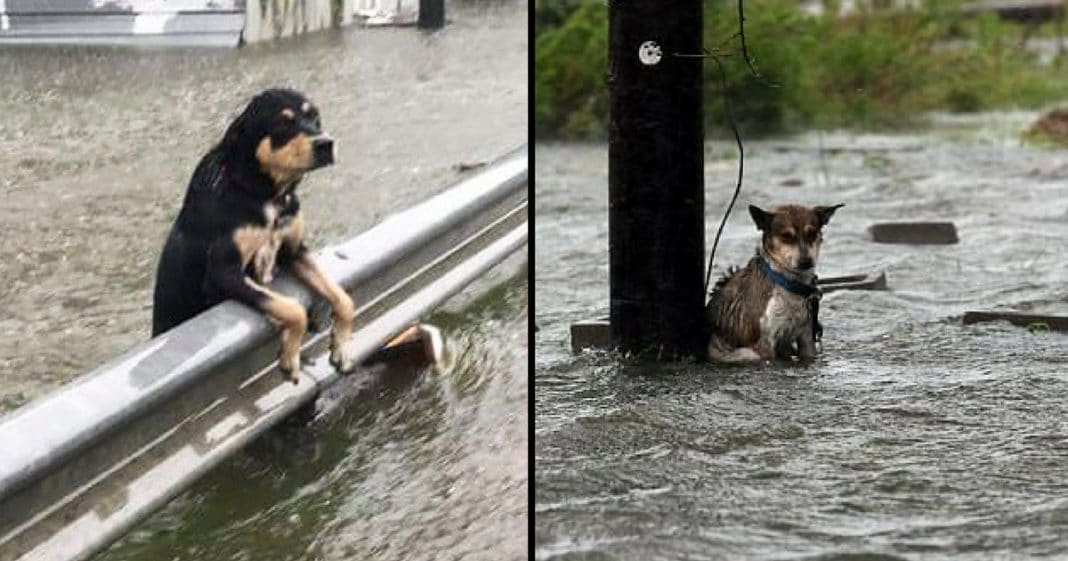 As anyone could imagine, watching the flood waters rise higher and higher as Hurricane Harvey unleashes its wrath would be terrifying. People scrambled to pack up the few precious belongings they could take with them before moving to higher ground.

Sadly, it looks like for some residents of the area, their pets were not among those “precious” items. Countless pictures have surfaced of pets chained to poles and abandoned in kennels, watching helplessly as the waters rise around them, unable to escape or fight for survival.

It is unfathomable to us how anyone could leave their pet like this, knowing they are leaving them to their doom.

Animals are smart creatures with good survival instincts and, while some might not be able to fend for themselves, they should at least be given the chance to fight for their survival.

Thankfully, while there have been many displays of heartlessness in the area, there have also been countless showings of heroism. Courageous and selfless souls are braving the flood waters to rescue people and animals who are trapped.

Two brave cowboys, Chance and Rowdy Ward, rode around on their horses, freeing other horses and livestock that had been left in their pens.

Jared Carter and Trevor May got in their boat and searched the area for animals in distress. Thankfully, they found these two poor pups that had been locked in a kennel on the porch of a house and left to drown right in the nick of time.

While the situation is a scary one, police are pleading with residents to unchain their dogs and give them a fighting chance. In fact, it is illegal to leave a dog chained or tied up during extreme weather or between the hours of 10 p.m. and 6 a.m., and police are promising to take action against those who do so.

“I promise you, that I will hold anyone accountable that unlawfully restrains their dog in extreme weather conditions,” said Montgomery County Police Chief Stephen Carlisle. “Dogs are your family members, too.”

As more and more people arrive at shelters with animals, authorities are scrambling to make sure they can all be accommodated. Red Cross officials have said that evacuees with pets are welcome at its shelters, and Houston’s BARC Animal Shelter has set up a trailer to house displaced pets at one site that isn’t allowing animals inside.

Hundreds of animals from shelters were evacuated ahead of the storm, some sent as far away as Atlanta, and the Humane Society in Houston says they will transfer their existing animals to other locations to make room for the expected surge in stray animals after the waters recede.

While our hearts break for the animals who have been left behind, we are so grateful to the brave men and women who are putting their own comfort and safety aside to rescue those in need.

Are you thankful for these rescuers who are going out of their way to save these animals? So share this!