Crowd Terrified When Man Jumps In Lion Cage, But Then He Reaches For Lion’s Paw 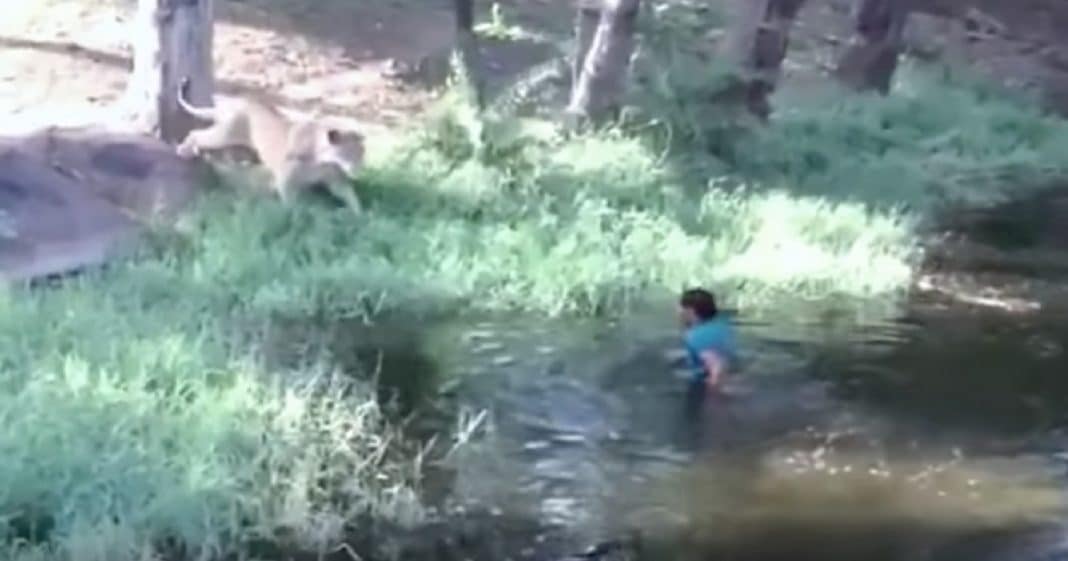 Jumping into an animal cage at the zoo is no small matter. I think most of us can remember what happened after a young boy fell into the gorilla enclosure at the Cincinnati Zoo last year – things didn’t end well for the gorilla (or the zoo).

And while most of us would never intentionally put ourselves in that kind of a situation, that’s exactly what this man in southern India did.

As a crowd of people stood around observing the lions in their enclosure at Nehru Zoo Park, they were suddenly startled by a large splash and turned to see 35-year-old Mukesh Kumar in the moat surrounding the enclosure.

At first it seemed like an accident, but pretty soon it became clear that he had intentionally jumped in.

As the crowd nervously began to shriek around him, Mukesh approached one of the female lions, Krishna, who seemed both frightened and intrigued (and maybe even hungry). Pretty soon male lion Radhika came over to see what was going on.

As the lions inched closer, terrified bystanders began to yell and throw things into the water to scare them off.

Thankfully zoo workers were able to rescue Mukesh and get him out of the enclosure with no harm done to him.

Perhaps not surprisingly, police later discovered that Mukesh had been drinking before he jumped into the enclosure and decided it would be a good idea to meet the lions close up.

“He told us he wanted to see the lions up close and shake hands with one of them,” said police inspector Harish Kaushik. “He is lucky enough to have survived. The zookeepers told us that it was the time of the cats for their feed and they responded to their voice when called out.”

Mukesh ending up spending the night in police custody and was charged under various sections of the Wildlife Protection Act.

Thankfully that’s all that happened! Hopefully his story will be a warning for anyone else thinking of attempting something similar!

Were you amazed to see Mukesh make it out of the lion enclosure alive? So share this!