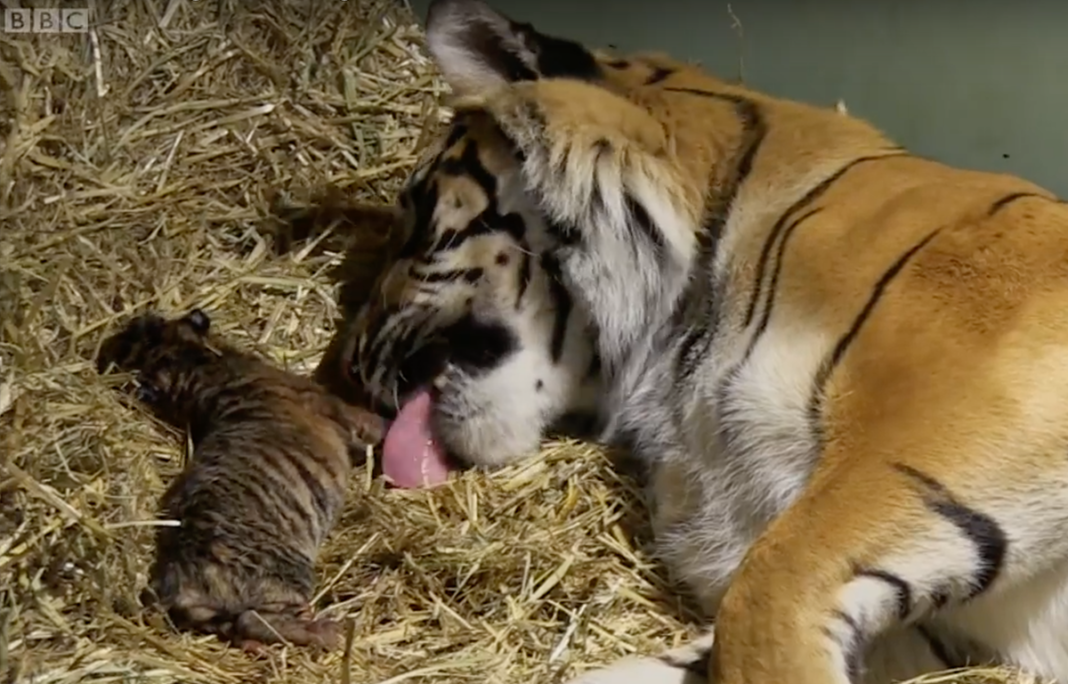 The critically endangered Sumatran tiger is one of the most beautiful animals in the world with heavy black stripes on a bright orange coat. There are less than 400 left in the world today. Poachers continue to kill them to sell their parts in Sumatra and in Asia, and their habitat is disappearing fast as humans encroach and develop the remaining land. Their relatives, the Javan, and Balinese tigers are already extinct.

Now, an audience of thousands would witness one of the last of her kind, Caitlyn the Sumatran tiger, give birth to not one, but two precious cub twins. Giles Clark and his professional team of zookeepers and vets watched nervously at Australia Zoo and shared the story on the BBC show, Tigers About the House.

Clark is director of conservation at the Big Cat Sanctuary, a breeding center for endangered cats that raises awareness and educates on wildlife conservation. 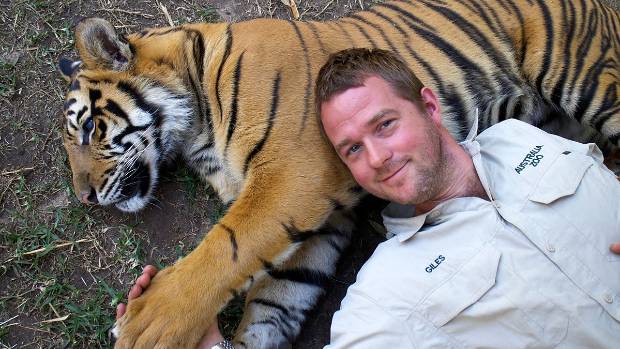 Giles Clark and one of the tigers in his care

If the cubs are born healthy, they would become the most genetically valuable tigers ever born at the zoo.

Would Caitlyn’s instincts for motherhood kick in, or would she fail to take critical actions to get the newborn’s lungs to start working as they enter a new world?

As the room of anxious and excited onlookers watch on a screen, Caitlyn endures labor for five hours. Meanwhile, Clark sits nearby beside the tiger, able to see everything up close to watch for any complications.

She allows him to share in the special moment, showing amazing trust for Clark. 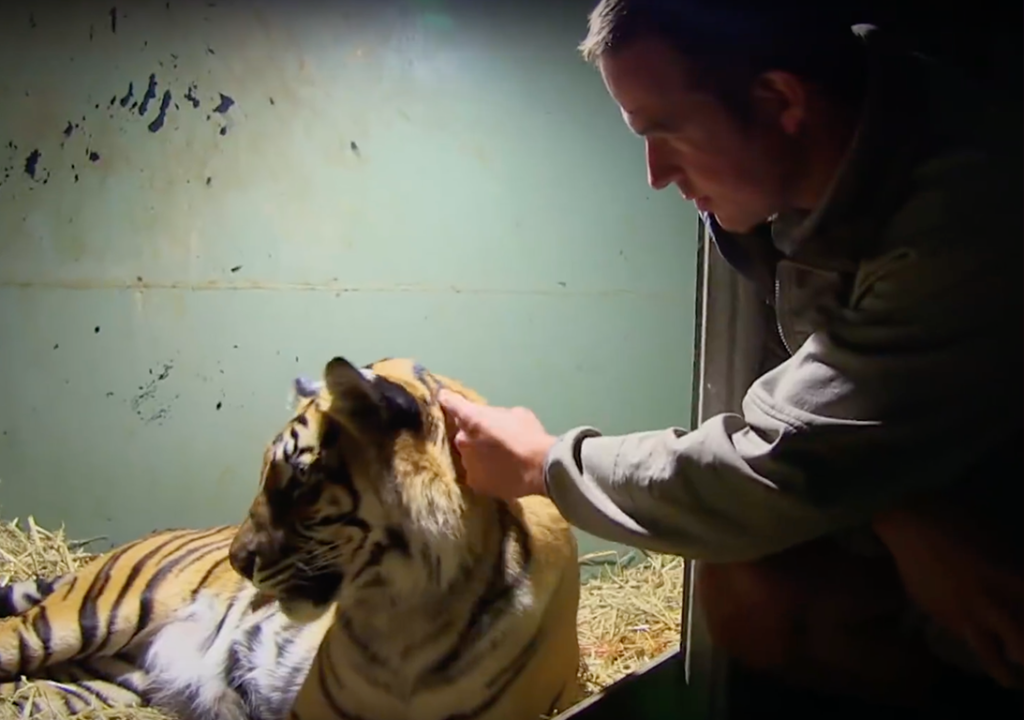 Caitlyn allows Clark to remain with her

Finally, the amniotic sac emerges, and soon a cub comes into the world. Everyone applauds and shouts with excitement. 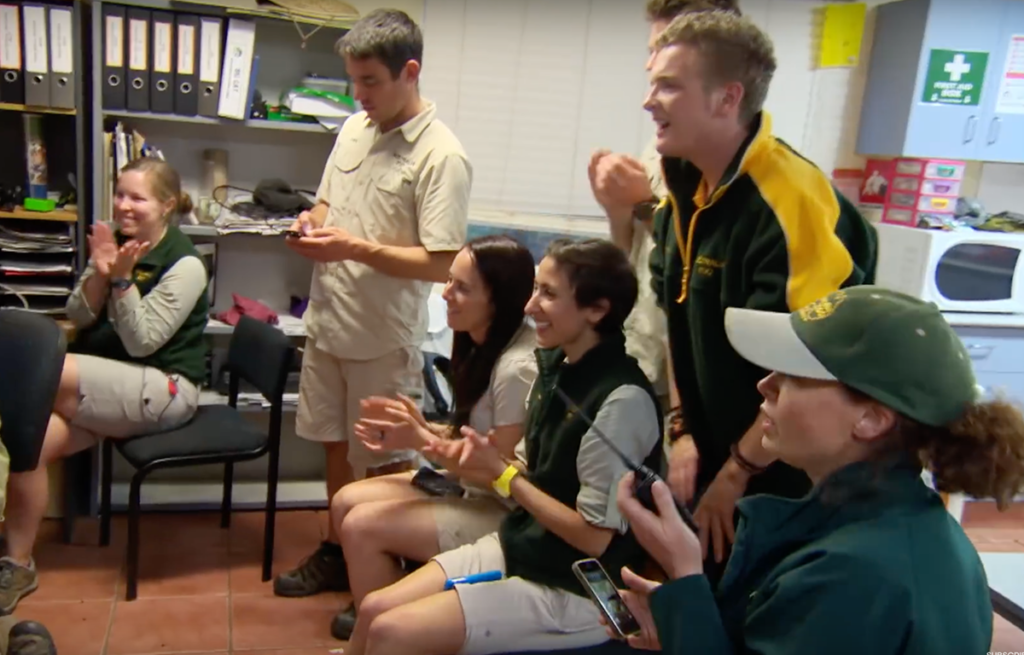 Vets and zookeepers applaud as the fist cub is born.

Then moments later, the room gasps as the cub fails to start breathing on its own. Fortunately, Caitlyn’s motherly instincts kick in, and she starts to lick the cub from head to toe, an action necessary to trigger the cub’s lungs to start working for the first time.

The cub gasps for air but doesn’t start to breathe. The team has to decide fast if they should intervene or let her carry out her natural duties, knowing the risk is enormous.

After two minutes go by, and just before the crew decides to move in, the cub starts breathing, then gives out its first cry, surprising the watchful mother. 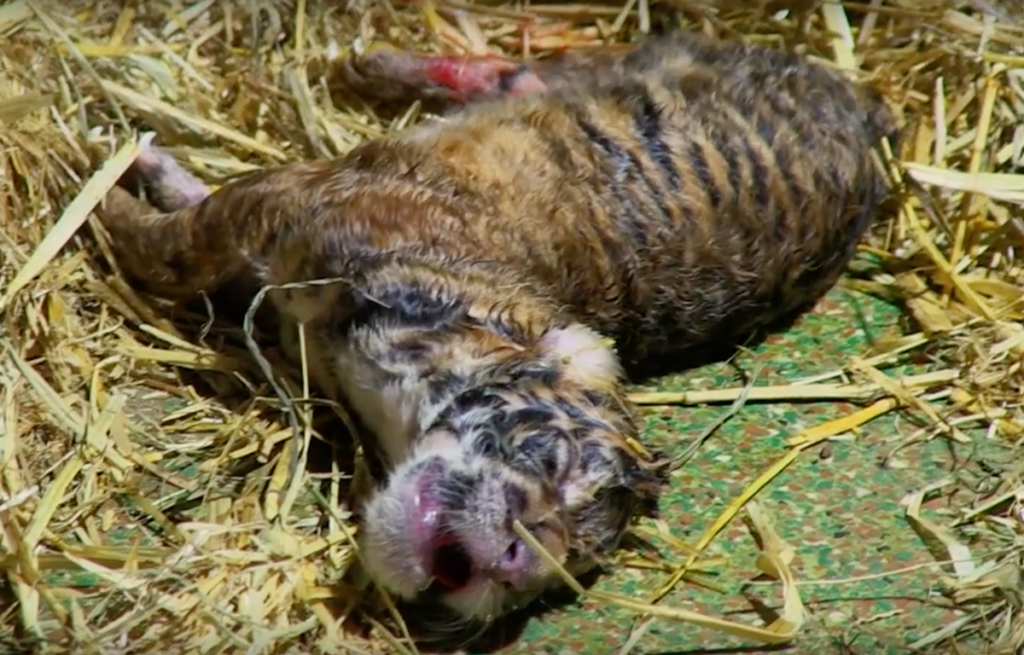 The first cub has a rough start

Fortunately, Caitlyn appears to be a natural at motherhood. She seems to roll over and look at Clark as if to say, “I got this!” as she is about to deliver cub number two.

“She did an amazing job and it’s really hard to just sit back here and let her get on with it,” Clark notes.

See what happens in the amazing video from the BBC below.

It’s amazing to see such a rare and beautiful animal receive so much love and attention from people who care deeply about preserving the Sumatran tiger and other endangered animals so future generations may have a chance to see them too.