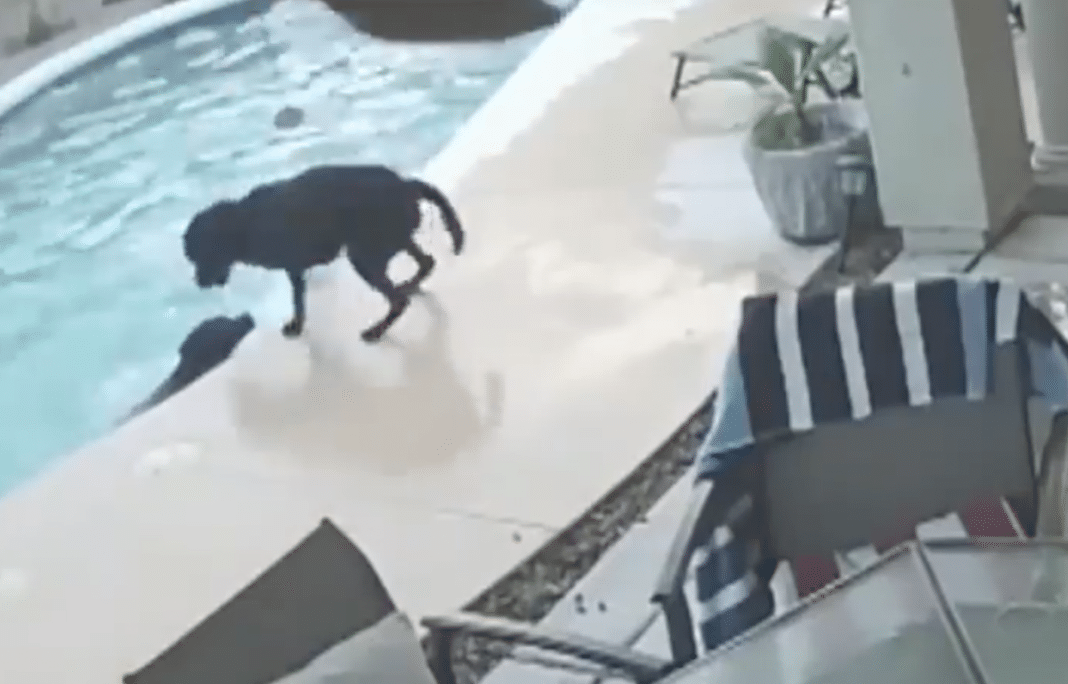 Jay and Laurie Becerra, a couple from Mesa, Arizona were at home going about their business and didn’t realize that outside, a harrowing rescue scene had developed at the family pool. Later, when Jay Becerra checked his security camera footage, they found out that their daughter Kayla’s black lab Remus had heroically turned into a lifeguard for their black lab, Smokey.

Kayla was away on business, and the couple was watching Remus for her. Fortunately, Remus was watching out for Smokey that day too. 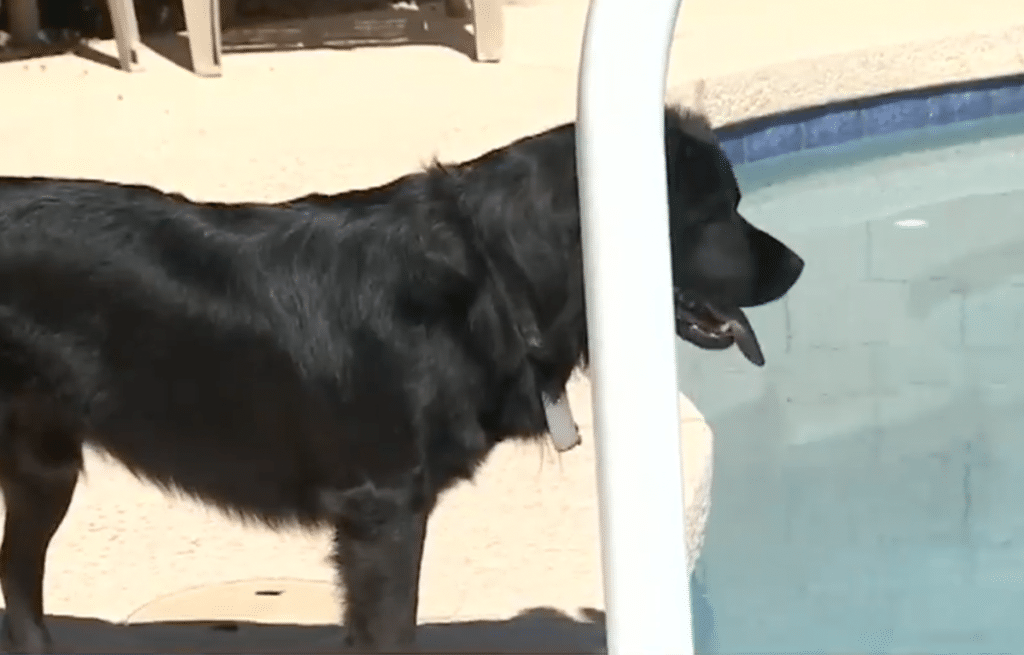 Smokey looks out over the backyard pool.

Smokey had fallen into the pool as the two dogs were playing. He wasn’t as fond of the water as Remus and wasn’t sure how to get out. He paddled against the side, unable to get traction.

Remus ran along the side of the pool, watching his friend tread water and struggling more and more.

That’s when Remus jumped into action. He dove into the water, and moved behind Smokey, using his head to nudge the lab from behind to assist him in climbing out. He actually seems to dive under the water a bit, knowing exactly what to do.

Thanks to Remus, Smokey was able to haul himself out, shaking off the water. Remus quickly got out of the pool and rushed to greet him. Then it was back to more play, as usual. 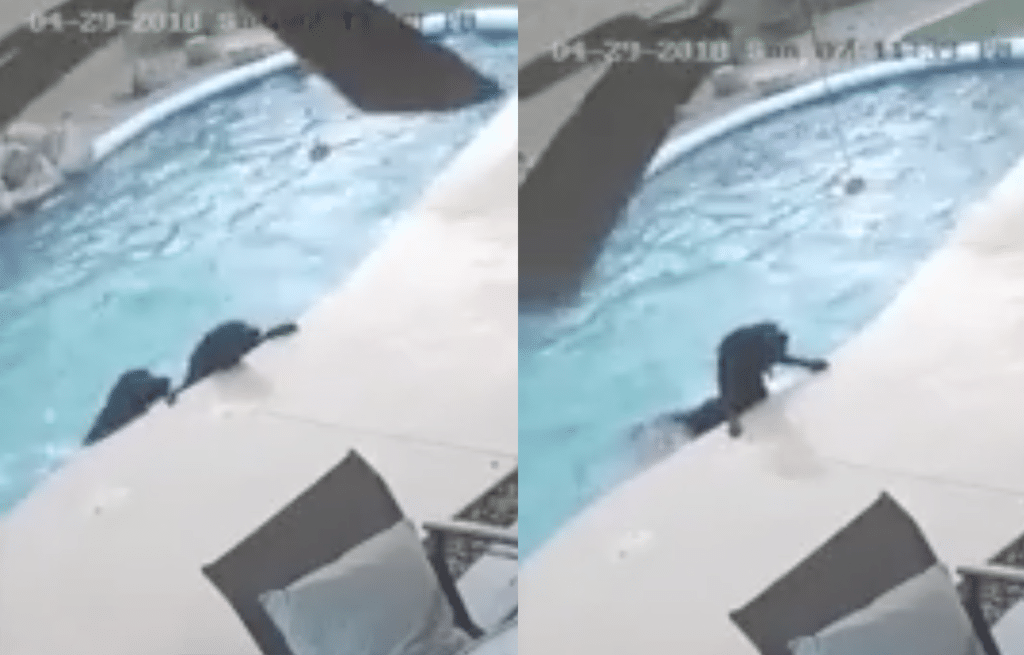 Remus to the rescue!

Jay noticed that the dogs were soaking wet, and went to look at the security footage to see what happened. The footage showed a heroic rescue in progress.

Jay showed his wife, who was overcome with emotion and started to cry.

“When I saw it, it was very hard to watch. Just seeing Smokey struggle like that–it really tore at my heart,” said Laurie.

She reflected that it was amazing to see this very rarely captured moment on video, and wondered how many similar moments people never get to witness.

“Just seeing Remus do that, it made me feel like, ‘Wow. All these moments that are never captured by people and just to see how wonderful they are.”

“They can be heroes, our four-legged heroes,” said Laurie.

Now the owners are prepared so that Smokey won’t have to be saved again. Although Smokey usually only sits on the first step of the pool and doesn’t care for swimming, the family is trying to give him swimming lessons.

They also bought a special life vest just for him. 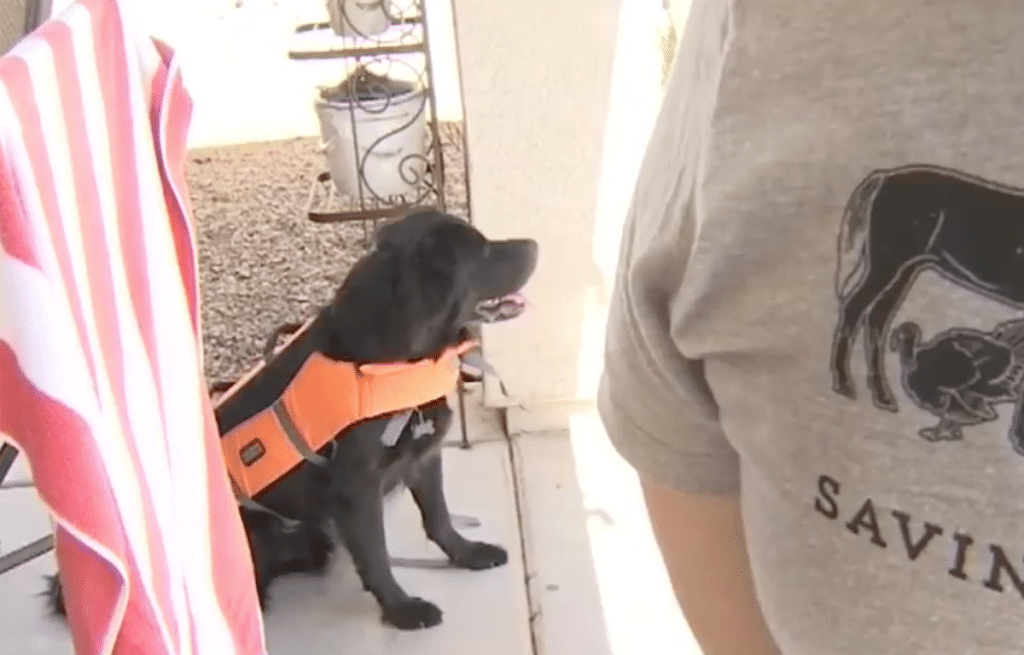 These dogs aren't playing.This video out of Mesa, Arizona, shows Smokey struggling to get out of the family pool. That's when his friend Remus jumps into action to save Smokey. Smokey's owner calls Remus her hero.Good boy, Remus!(Video courtesy Laurie Becerra)Story: https://bit.ly/2jUipyK

MESA HERO DOG GOES VIRAL: It turns out man's best friend is also dog's best friend! By now, you've probably seen the viral video of Mesa pup, Remus, saving his buddy, Smokey, who fell into a swimming pool and struggled to get out. Now, we hear from one of the dogs' owners who tells us about the amazing rescue! ❤️❤️❤️MORE: http://bit.ly/2rMB8AoVIDEO: Jay Becerra via VIRALHOG.COM