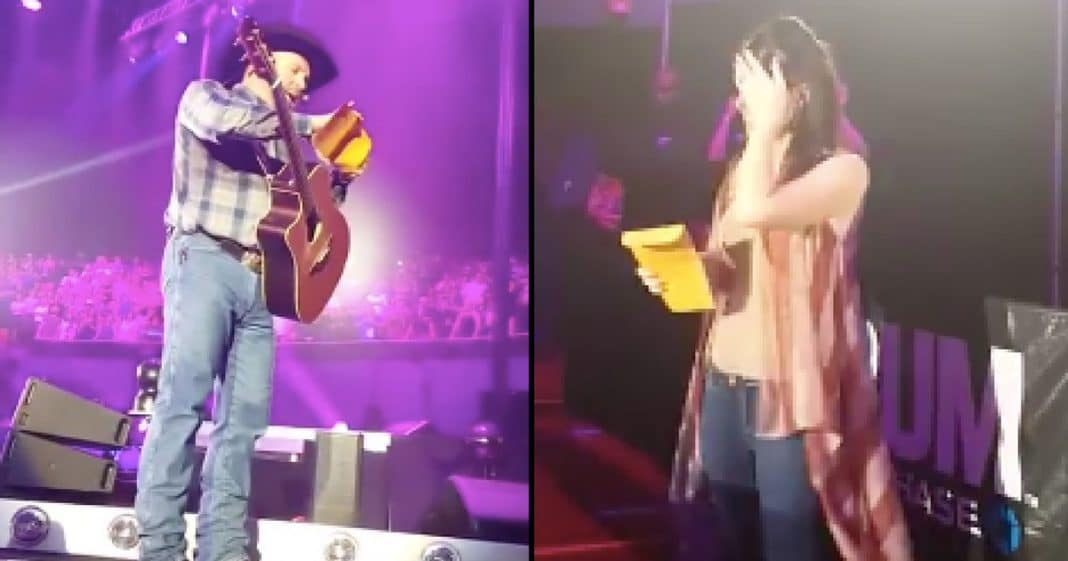 I don’t care whether you love or hate country music – this is pretty awesome!

Wesley and Katy Hansen have both been big Garth Brooks fans since they were little. The couple is expecting their first child and, when they realized Katy’s ultrasound was scheduled for the day before Brooks’ concert, they decided to go out on a limb and see if they could get him to reveal their baby’s gender.

“Katy mentioned the idea of making a sign, thinking about how cool it would be if Garth revealed our baby gender,” Wesley said. “We knew it was a slim chance but worth a shot.”

They made a sign that read, “Working on a full house. Boy? Girl?,” but they were both a little skeptical that the country singer would see it.

“Prior to making the sign, I was the one who was skeptical,” Wesley recalled. “After, Katy made the sign and we were inside the venue, Katy started to say, ‘it’s never going to happen, let’s just open it.'”

Much to their surprise, though, Brooks did see the sign and he invited the couple to come up to the front of the stage.

They told him their baby was due in December and, when he asked if they had picked out names, told him they would name the baby Brooks no matter whether it turned out to be a boy or girl.

Brooks carefully opened up the envelope and then told the happy couple, “I’ve gotta tell you, I’m extremely happy for you because I have three of these.”

The Hansens are having a girl!

As the stadium erupted in cheers and the lights turned pink, the ecstatic couple embraced. But Brooks was on a roll and he decided to give the couple one more surprise.

“Let’s make a deal,” he told them. “If I’m still alive when Brooks goes to college, we’ll pay for her college.”

Katy and Wesley were speechless. His generous offer went far beyond their wildest expectations.

“We didn’t even expect him to reveal our baby’s gender, so for him to make an offer to pay for our child’s college, unprompted, was a complete shock and we could not be more grateful!” Wesley said later.

“We would just like to thank Garth and Trisha for their overwhelming generosity,” he continued, “and let them know that we appreciate Garth allowing us to be a part of something so special and including it in one of his shows.”

Were you touched by Brooks’ generous offer to this expectant couple? So share this!