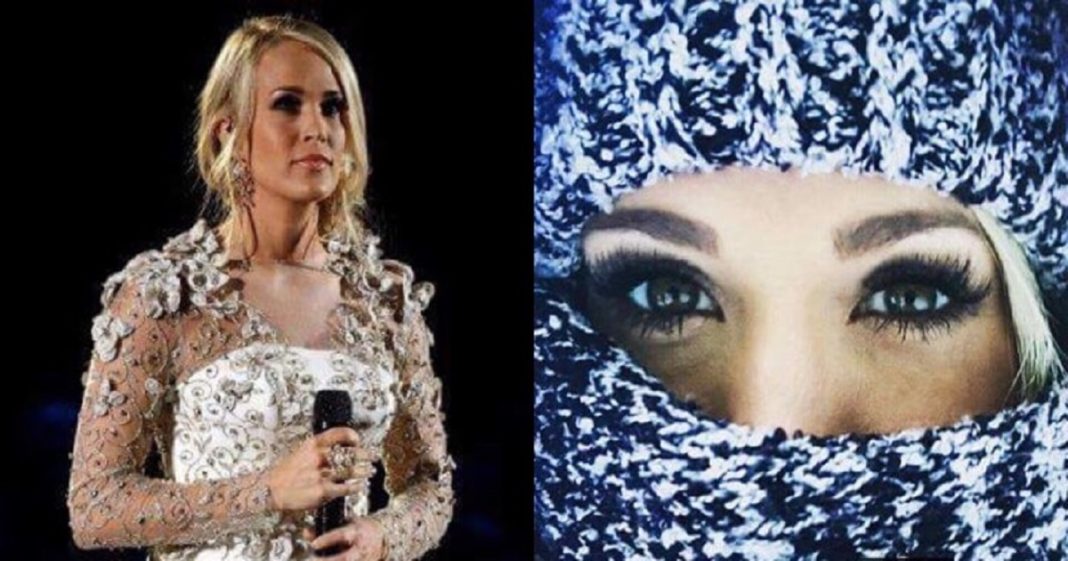 We shared with you recently that country music superstar, Carrie Underwood suffered a terrible fall at her Nashville home in November of last year. She revealed in a blog post to her fans she required 40 to 50 stitches on her face.

The multi-award winning singer told everyone that when she does decide to re-enter the spotlight, she might look a little different than they’re used to. Carrie also posted a photo of her face which she kept covered with a scarf.

When in 5 degree weather, wrap your @caliabycarrie scarf around your neck and face…you keep warm AND look like an awesome winter snow ninja! #WinWin #StayThePath #LetItSnow #BabyItsColdOutside ❄️ ⛄️

She wrote: “In addition to breaking my wrist, I somehow managed to injure my face as well.”

“I’ll spare you the gruesome details, but when I came out of surgery the night of my fall, the doctor told [Underwood’s husband] Mike that he had put between 40 and 50 stitches in.”

Despite the nasty injury, Carrie also told her fans she’s healing. She ended her message by sharing her optimism for the new year and how fortunate she is to have received so much support after her accident: “I honestly don’t know how things are going to end up, but I do know this: I am grateful,” she wrote. “I am grateful that it wasn’t much, much worse. And I am grateful for the people in my life  that have been there every step of the way.”

Though Carrie hasn’t shown her face on social media, a photo was shared in December by  Adrienne Gang, a reality star from the Bravo show, Below Deck.

She and Carrie had just worked out next to each other in class. The reality show starlet had no clue about Carrie’s recent injury when she took the photo.

Just worked out next to @carrieunderwood NBD… she is adorable and so gracious… LOVE HER! #BelowDeck pic.twitter.com/scDPGudEe3

She wrote: “Just worked out next to  @carrieunderwood NBD… she is adorable and so gracious… LOVE HER!”

She said in a separate post one day later she: “had no clue” Underwood had a recent fall, and the singer “looked amazing.”

We don’t know when Carrie will return to the stage, but clearly, those around her didn’t notice her face injury. It was her kindness and gracious personality that shown through instead.

Whenever we experience something traumatic, we all respond differently to the outcome. Carrie isn’t yet comfortable with showing her face. Receiving so many stitches will leave a scar, but her fans won’t care how she looks. They love her voice and music. They’ll just be glad she’s back to singing once more.