Cops See 91-Yr-Old Changing Tire After Accident, Then They Realize Who He Is And Rush Over 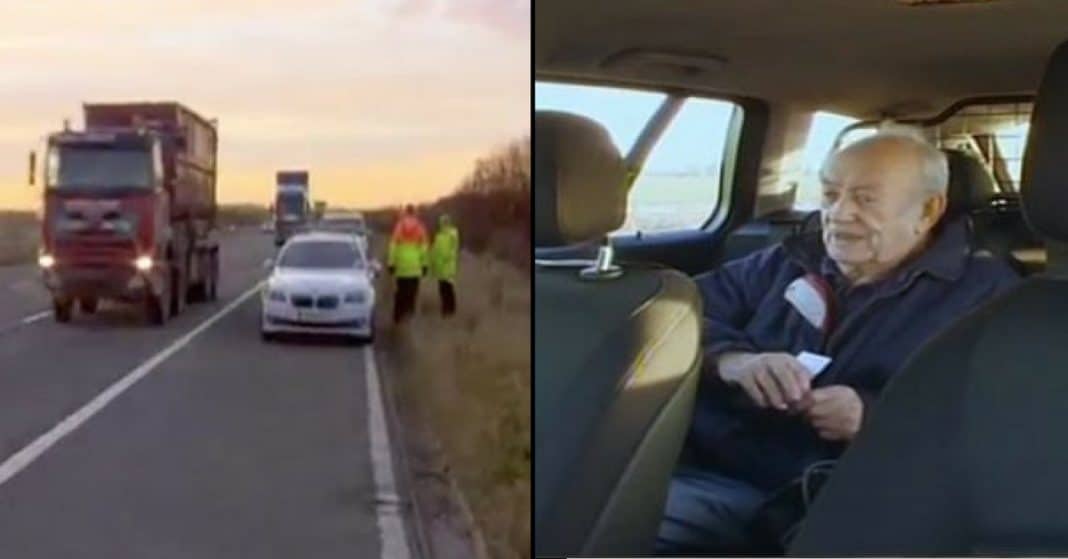 Bill Mountfield, 91, was en route to the ferry station to take a passenger boat to Holland when he got into an accident with a truck. Determined to make it to the terminal on time, he began changing his own tire on the side of the highway.

When Officers Doug Lofthouse and Dale Anderson arrived at the scene, they concluded that Bill’s car was not safe to drive, despite his efforts to salvage it. Mr. Mountfield declined their persistent offers to drive him home because that would mean he would miss his very important trip.

The three started talking and, soon enough, the officers learned that Bill was a British World War II veteran who had outlived his wife and kids. He was a fighter in one of the war’s most crucial battles and performed duties in one of Britain’s best paratrooper forces throughout the war.

The trip to Holland was for a reunion with some fellow veterans, the only family he had left. The five-week visit would allow him to stay with his comrades over the Christmas holiday and there was nothing that could make him miss it!

Lofthouse and Anderson became just as motivated to get Bill to his ferry. It was their way of saying “thank you” for his undeniable heroism and service.

The two started contacting different rental car companies, but each one denied Bill because of his age and the length of his trip. Options were running low, but then they decided to reserve a car in person, believing that a company would have a change of heart once they met Bill and heard his story.

And they were right!

The officers were able to see Mr. Mountfield off and wish him luck on his trip. Thankfully, Bill made it to Holland to see his friends.

Sadly – but perhaps appropriately – Bill passed away during the visit. He had lived a long and purposeful life and, thanks to Officers Lofthouse and Anderson, his last days were spent in the presence of loved ones.

The officers’ compassion and persistence made the biggest difference in how he got to enjoy his final moments.

Thank you, officers, for going out of your way to help an incredible hero. Rest in peace, Mr. Mountfield, and thank you for your service.

Were you touched by what these officers did to help this veteran? So share this!