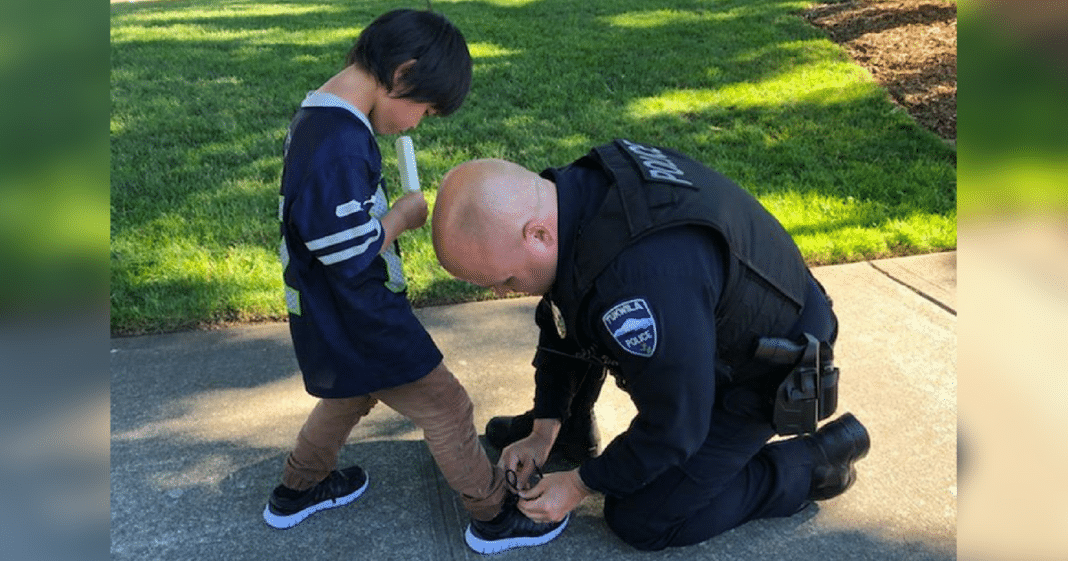 I love stories like this one below. It highlights why cops should be respected and given all the thanks in the world for protecting and looking after the most vulnerable in their communities. They make the world a better, happier place with small, simple gestures.

These two officers from Tukwila, Washington helped a young boy who didn’t have any shoes. The police department posted this on their Facebook profile. Read on to see how these generous anonymous officers brightened the day of their new friend.

“Sergeant Modest and Officer Bashful (names have been changed to protect their bashfulness) were patrolling on foot at Cascade View Park yesterday afternoon. They came across this guy running around in torn dirty socks and bleeding from a decent sized cut on the bottom of his foot. The sergeant cleaned up and patched his foot with his first aid kit. When asked where his shoes were, their new friend told them that he didn’t have any shoes because the pair he had was too small for his feet to fit in.

“The sergeant ran out and grabbed a pair of shoes for him while the officer kept him and his friend’s company. He came back with not only a pair of shoes but also with a bunch of popsicles because what isn’t better than a cold popsicle on a hot summer day?! The officer helped to tie his new friend’s shoes, and they all enjoyed a popsicle together before parting ways.”

Wow, what a beautiful thing to do for a total stranger. Would you do something that selfless? Have you helped someone without considering the cost to you? Indeed, it took a few dollars to get this guy some new shoes. The two officers might not think much of their kind gesture, but their new friend won’t ever forget what they did for him. Well done, officers!