Cop’s Bike Goes Missing From Front Yard, That’s When He Finds The Note 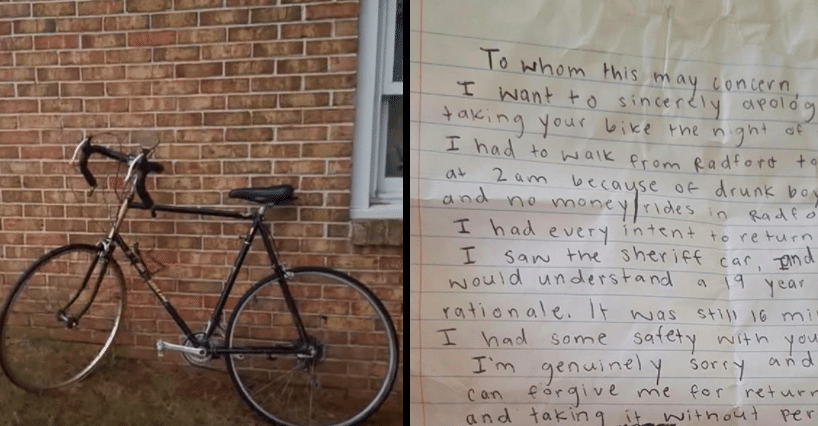 It never fails that when the topic of ethics is broached, someone will bring up the example of a father stealing bread for his starving kids. Of course stealing is wrong, but can it be justified in certain circumstances?

Pulaski County, Virginia, sheriff deputy Josh Bowden found himself in the middle of such a predicament recently. He walked outside one morning to find that his bike, which had been leaning against the side of his house was gone.

His patrol car had been parked in the driveway all night and he was surprised that someone would knowingly steal a bike from a cop’s house.

For days he couldn’t figure out what had happened to it. Then, just as suddenly as it had disappeared, the bike reappeared along with a note. When Bowden read it he couldn’t believe what it said.

“To whom this may concern,” the letter began. “I want to sincerely apologize for taking your bike the night of the Superbowl. I had to walk from Radford to Blacksburg at 2 am because of drunk boys, a dead phone, and no money/rides in Radford.”

The 19-year-old girl, who identified herself only as “M,” went on to explain that she had to go 16 miles that night and when she saw the bike next to a sheriff’s car she hoped the officer would understand her predicament.

“I’m genuinely sorry and hope you can forgive me for returning it so late and taking it without permission,” the letter concluded.

Bowden said he has tried to locate the girl but hasn’t had any luck, so he decided to post his response to her note on Facebook with the hope that she – and others like her – will see it and make better choices in the future.

“Your letter concerns me,” he wrote. “First off I am the father of a girl only a few years younger than you and would be mortified had she done this. I’m glad my bike was of help to you, however, I would like to make some suggestions because I hope my daughter never finds herself in that situation.”

He suggested that M make some better choices about the people she hangs out with, telling her to choose friends who will look out for her, “not ‘boys’ who have no concern for your well being.”

M obviously realized that walking 16 miles home in the middle of the night wasn’t very safe, but Bowden wanted her to realize just how dangerous her situation was and give her advice on how to keep herself from falling prey to anyone who might harm her.

“There are unfortunately a lot of really bad people out there waiting for an easy target such as a young girl out early in the morning by herself,” he wrote. “If you are going to go out and party make sure you have reliable friends and plenty of people you can call to come get you should something go wrong. Carry some sort of means to protect yourself and learn how to do so.”

Bowden assured M he wasn’t mad at her for taking his bike, but said he wished she had just knocked on his door and asked for help instead.

“I don’t ever want to go on another search for a missing young girl or boy for that matter, epsecially when they usually end with a body being found and some parents wishing their baby had made a better choice,” he told her.

“I’m sure you have a family that loves you very much and people who value your existence,” he continued. “In the future please don’t put yourself in such a precarious position, but if you ever do, have a backup plan. Should that fail, please bypass my bicycle and come knock on my door. That is all. God bless.”

Though Bowden has yet to connect with M, he hopes his Facebook message will reach her. He also hopes that other young people will see his post and “reconsider their options” when faced with a difficult situation.

Sometimes things seem bad and it looks like there are no good options, but police officers have vowed to serve and protect, and Bowden wants M to know that he plans to keep that promise, even if she’s knocking on his door at 2 am.

Do you applaud Bowden for the way he handled this situation? So share this!